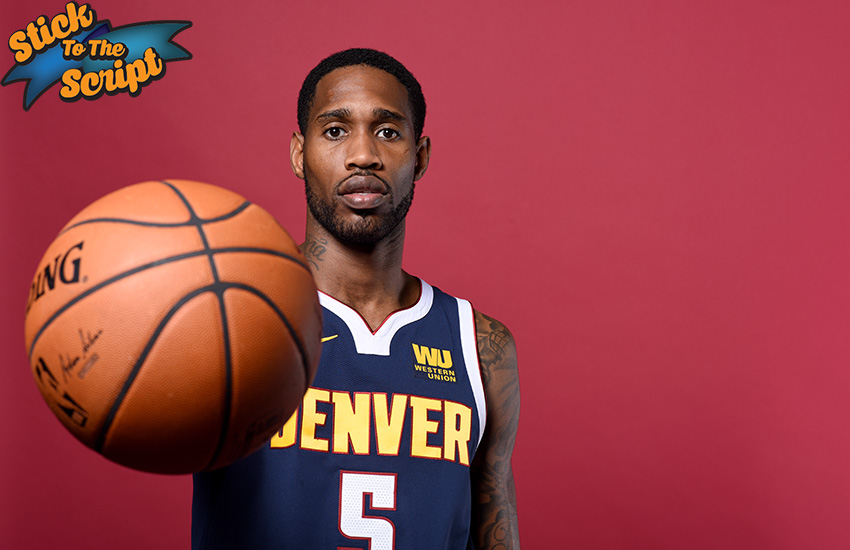 Every year, athletes have dreams and aspirations to play in the League and every year only some of those hopefuls are awarded with an opportunity while most will have their dream deferred. Will Barton was one of those who turned his aspirations into reality.

The Baltimore native decided to forgo his remaining two years of eligibility at the University of Memphis and he was later selected by the Portland Trail Blazers in the the second round of the 2012 NBA Draft.

Barton quickly found himself in a situation all too familiar throughout his basketball career: win or go home. He had been betting on himself for longer than he could remember and after three seasons with the Trail Blazers, he was traded to Denver where he would blossom into one of the team’s key contributors.

Fast forward to the present day, and his work ethic is stronger than ever, as he continues to work tirelessly to achieve and get better. He has earned to play on the highest court in the world for a team with legitimate championship dreams, and that is something he will never take lightly or for granted.

In Barton’s world, everyday is a blessing. A right hip injury sidelined him at the beginning of last season for 38 games, however he persevered and maintained his competitive edge to get back on the court and contribute to the team at a high level.

Barton and I had an opportunity to speak at length recently after his participation in the Danny Rumph Classic in Philadelphia. We spoke about his basketball journey, the adversity and hardships, his friendship with Dame Lillard, as well as his biggest role as a parent.

Let’s talk about your hometown of Baltimore, which often gets overlooked for basketball. why is that?

It’s just like you said: We come from a city where it is overlooked. A lot of people will talk about the crime, drugs, things like that, but we have gritty basketball players—we’re tough, we’re guys who just grind go and get what they want. We have a lot of NBA players—a lot of people don’t know that.

Yeah. Especially back in the ’80s, like you said—Reggie Williams, Muggsy Bogues, Reggie Lewis, that whole Dunbar [high school] went to the NBA. We have a rich history if you do your homework.

How does that Baltimore basketball player translate to on the court?

Do you remember the first NBA game that you went to?

The first one I ever went to? Well I didn’t go to games when I was younger. We couldn’t get them tickets.

Do you think it might have been in DC?

No…the first game I ever went to was probably when I went college, University of Memphis; I went to a Grizzlies game.

Man, when I first looked at it, I was like these guys look big. I don’t know if I’m going to be able to go out there and do my thing. Watching from my seats, they look really tall and strong, but now I know there wasn’t anything for me to worry about.

When did you know in your heart that you were built for the League?

Probably 10th grade. Just playing against guys that was older than me on the high school level who were considering the pros. Then I started playing against guys who played overseas and NBA players in open runs, and I was holding my own. That’s when I realized I could play.

That gave you your confidence.

Yeah, anytime you play against someone on a higher level and you’re going out there competing and holding your own.

Carmelo Anthony is from West Baltimore.

Yeah, Melo and I are from the trenches, he’s from the west, I’m from the east. Baltimore is hectic, it’s just like Philly.

You played two years at Memphis. Can you talk about that part of your basketball life?

Memphis was the best two years of my life. It’s really where I became a man. Me and my brother down there everyday just on our own, in the gym everyday. The city really embraced us and we had a real good team down there. Matter of fact, we had the No. 1 recruiting class going into college and we were surrounded by a lot of good players and that only pushed me to get better.

On draft night, it didn’t go exactly as planned and your mother spoke with you about the process. What was that night like for you?

It was just mixed emotions for me. As a kid you always have that dream of walking across the stage, getting that hat from David Stern, shaking his hand and going to the team. For me it was different. I wasn’t at the draft, but I was expected to go first round. I knew my slots from like 18 to the end of the first [round], and then they kept calling names, and all the teams, and picks were going by…I was getting kind of nervous, like man, where am I going to land? I was supposed to be a first rounder. My name didn’t get called until 40, so I was upset because I knew I was a lot better than people they were calling before me. Once they called me, my mom, I talked to her…she made me realize it was still a blessing, and from there I realized I had to grind; nothing was going to be given to me. I went out, worked as hard as possible and kept the mindset to get in where I fit in.

Your mother told you that it was nothing new, and that you always had to work hard to get where you wanted to go.

Yeah, and it still drives me. I always feel like I’m the underdog. That’s why I’m successful now; I always have a chip on my shoulder. I never feel like I made it because I know people are still doubting me, people are still going against us, so I have to keep working, keep grinding or I can easily fall off and go back to where I was.

Damian Lillard looks at you like a brother. What can you tell me about him and the influence he has had on your life?

You said it man, that’s like a brother to me. We came in together, got drafted in the same draft with Portland together, so we was together from day 1—from flying out there for our press conferences, to summer league practice, to training camp. Like you said, he’s from Oakland, I’m from BMore, so we’re kind of cut from the same cloth. He was an underdog. He went to Weber State so he was kind of a bigger underdog than me, and he just kind of let his game do the talking. He was a worker, I was a worker; so we just clicked and he was somebody who had early success, but he never forgot who he was. He always was humble and he always told me I was nice. And to hear that from an All-Star—telling a guy who ain’t really playing yet, that you’re one of the most talented players on the team—it keeps you going. There are a lot of tough days when you’re not playing. Those type of things keep you going and I needed that.

Now y’all go at each other.

Yeah [laughs]…he got us. He’s one up on me right now because they beat us in that playoff series, so I gotta get some get back, but he deserves it. I’m happy for him.

Last question, talk about being a parent and playing in the NBA. That has to be tough, being away from your children and family.

You just have to embrace it. The NBA season is a long season. You’re on the road a lot, you’re tired, all kinds of stuff, so when the offseason comes, I get to be around them more, and I try to take advantage of it by spending a lot of time with them, either in the house, taking them out to eat, taking them to the park or just walking outside with them. I’m real family-oriented because I keep my friends around them, too, so they are like uncles to my kids. We’re all together, and you know it takes a village to raise kids, so I keep all my close people around me and it just makes the experience that much better. I remember my son…he was just born, now he just turned 5, so just to see him grow and he’ll say certain things, like “I want to be like my father when I grow up, I want to play basketball,” it makes you smile. It definitely help me grow up a lot.