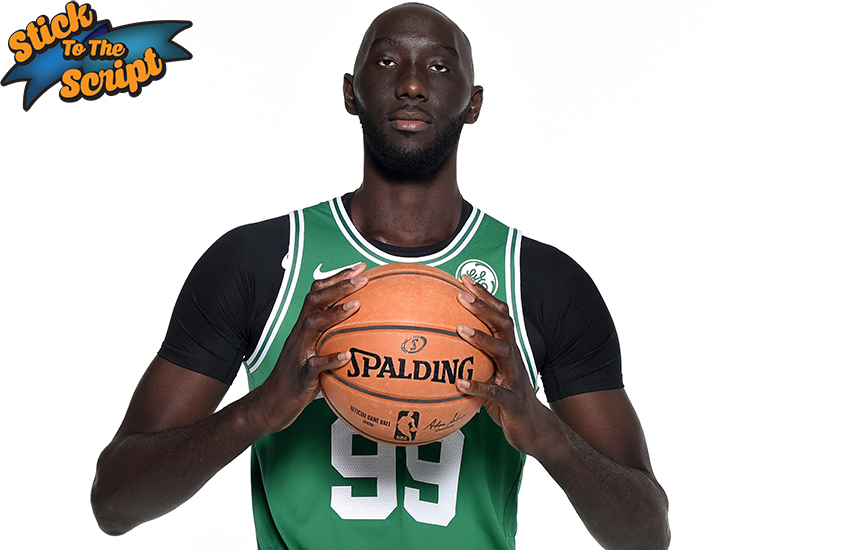 Tacko Fall is the enigmatic fresh new face for the storied Boston Celtics franchise. He quickly became a fan favorite after going undrafted in 2019 and signing a contract to play in the Summer League. He put up impressive numbers with averages of 7.2 points, 4.0 rebounds, 1.4 blocks, while converting on 77 percent of his shots from the field. The Celtics rewarded him with a two-way contract, extending his opportunity to make an impression through the regular season.

Fall’s road to the league was not easy. He left his home in Dakar at 16 to pursue the possibilities of basketball, playing organized basketball in the Houston area and training for Hall of Famer Hakeem Olajuwon. Standing 7-6, Fall was the tallest high school player in the country and received many scholarship offers, and settled on the University of Central Florida where he averaged 10.1 points and 7.7 rebounds over his four years.

His ability to adapt and make the best of his opportunities has bode well for him. He is averaging 4.3 points, and 2.5 boards for the Celtics. Meanwhile, he is making a good name for himself with the G League affiliate Maine Red Claws with 13.8 points, 10.2 rebounds and 1.1 assists through 13 games. Fall was recently called up to the Celtics and I had an opportunity to speak with him last week after a nationally televised matchup against the Philadelphia 76ers.

He and I spoke about his basketball journey, playing at UCF, getting adjusted to the professional ranks and more.

Can you talk about your background and how far you’ve come in relation to where you are today with the Celtics. You came to this country and you have been on a non-traditional path to the League.

It’s been, like you said, it’s been quite a journey, especially the way I started. I started pretty late…had to fight through a lot of things, especially for a guy like me, people usually have a lot of question marks when you get to a certain height and I had to fight through all those doubts and just keep showing…you know, trying to prove myself and prove to people that I can play and contribute regardless of the level. When I was in high school, going through college, and from college to pros, I have always had a strong mindset of where I wanted to be and what I needed to do and with God’s help I kept working and doors kept opening and I just took advantage.

Yeah when I was a kid.

Can you talk about that and then when did you find a love for basketball?

Yeah I played soccer for fun; back home everybody played soccer. Starting when I was 16—first it was oh he’s tall, that’s really how it started.

People just kind of wanted you to play.

Yeah, but then the more I got involved into it…it was just that desire in me to say, “If I’m going to this, then I want to be really good at it.” I just kept working and studying the game and I was fortunate to meet great people, people that have done it, people who have been there, and they have coached me throughout my career and just the love for the game for me, just grew and that path, and now I’m here.

People here in the U.S., they just think, “Oh he came here to this country, and now he’s here…” They don’t understand that you left one continent to come to another continent.

Talk about that a little bit. How did you get over that?

It definitely takes a little bit of an adjustment, but it kind of helps when you’re still a kid, cause I feel like kids get used to things a lot quicker. For me, I came here kind of young and it didn’t take long for me to learn the language. Like I said, I had good people around me, so just got used to the culture and I just go from there.

The food…I know you miss that.

Yeah, definitely miss the food from back home, but you can go to places like New York and there are strong communities—a lot of Senegalese and West African communities.

I know your college coach…

Johnny Dawkins. What can you tell me about playing for him?

Playing for him, was one of the best things I think—one of the best things I think could have happened in my career. Both coaches I had in college—my first year Lonnie Jones, and then after he left, three years with Johnny Dawkins. First, he’s a heck of a coach, but he’s even a bigger person. I don’t think there is anyone that has a bigger heart in college basketball than Coach Dawkins. He’s been through it, he knows. He’s played in the NBA, been around great coaches, so he knows, and him and his staff have really helped me in my career. I see a lot of coach Dawkins in coach Brad [Stevens] as well. They both have kind of the same style.

And he cares. You know that he cares about you.

Was there a moment when you realized that you could play on this level?

In the Summer League. That’s when…I never played at that level before, but deep down I knew that I could do it. If you don’t put yourself out there to see, then you’ll still have in the back of your mind: maybe, maybe not. The Summer League…even though it was limited minutes, I came in and I contributed. Some of those guys have played in the NBA, some of those guys have been pros way longer than I have. Most if not all of them have played basketball way longer than I have, so I felt that I could do it. And then I spend a lot of time in Boston, all throughout the summer, and just working out with the guys. It helps when you have All-Stars on the team. You see them and you play with them, sometimes against them—it’s like if I work I can definitely play with them. From there, my confidence grew and they have been really good at helping me and my development so far, and every day it’s “keep working, keep working” that’s pretty much how it happened.

Final question: Who did you—once you got a liking, a love for the game—who did you really look at and enjoy watching them play or pattern you game after?

I watched a lot of bigs. I used to go to YouTube and just watch anybody that I could watch—old school bigs, to new ones. I used to watch a lot of Hakeem [Olajuwon] tapes, Some [Dikembe] Mutombo tapes. I watch Hakeem over and over again. I don’t have his footwork, most definitely not.

Not yet. For my size, I move, but I don’t have Hakeem’s footwork, but I’ve watched a lot of him. Tim Duncan, is someone that I think, all-time is definitely my favorite player. I’ve watched Bill Russell on like blocking shots. I watched some old Dwight Howard, that’s like when I was in high school, I used to watch those. Pretty much all the bigs that were like really good, I used to watch the tapes. Even recently, even like in college, a lot of recent bigs like Joel [Embiid], I watched a lot of their tapes.