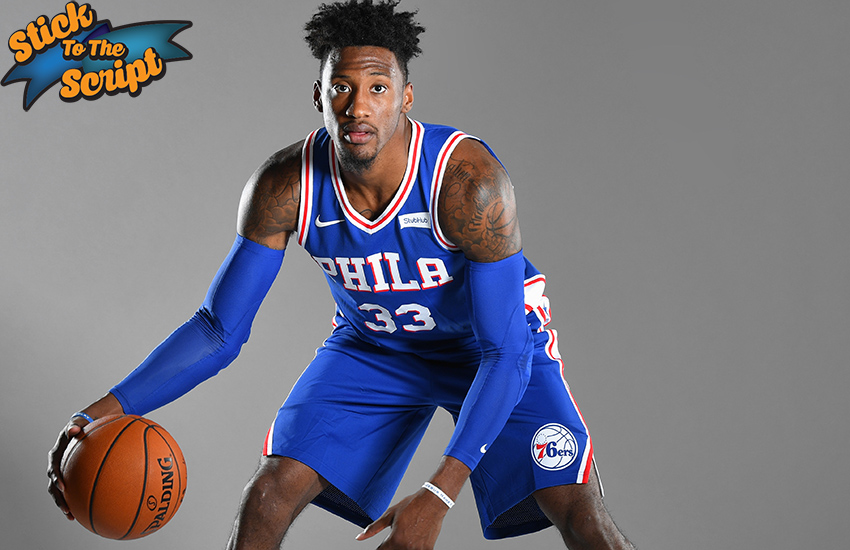 The road to the NBA is one of many paths. Some players are drafted with much fanfare, others quietly enter the League through free agency, no two stories are the same. The circumstances might differ, but once in, the goal is the same: staying and establishing a career.

Robert Covington of the Philadelphia 76ers didn’t step foot to shake hands with Adam Silver or Mark Tatum on a grand stage, but has accomplished something some of his peers from his rookie class have not done: become one of the cornerstones of a franchise. After three years of proving his worth as one of the better 3-and-D wings in the game, Philly rewarded the 6-9 swingman to four-year, $62-million extension. To reward the the Sixers for their faith in him, Covington became the team’s defensive anchor and being selected to the All-Defensive First Team.

The hard work and perseverance has paid off and the road less traveled is part of what make Covington’s narrative so inspirational. The Sixers will begin training camp later this month, and they will rely on the consistency that he will provide on both ends of the court.

I had an opportunity to speak with Robert about his alma mater, not getting drafted and more.

Talk to me about your basketball journey.

Coming into high school, I made a transition from being a big to a wing. My coach started to allow me to play on the perimeter because he saw me shooting in the gym just playing around and he said he was going to test it out and allow us to see how we roll from that and my game just kind of evolved from there. Going into high school I never played for any schools. I only played AAU basketball. My freshman year I was 5-9, but I jumped to 6-3 before the season so that was a big spurt for me. My sophomore year I went back to playing big at the 5. I was the second biggest guy on the team. I didn’t really play a lot in the beginning of the season because the coach went with his core group of guys that he had on his B-team from his freshman year. The good thing about my freshman year is that I play up on varsity during the playoffs. Coach saw us playing on the side while the varsity practiced and he asked if I was on the team and I told him that I played on the freshman team. He said that I could really shoot and the next day he told me to meet him at 3:30PM. I didn’t know why, I didn’t know what it was, it just so happened that he gave me a practice jersey and told me that I was going to play varsity during the playoffs.

What was the college recruitment process like for you?

Tennessee State was one of two scholarship offers I had. The other was Sacramento State. I had coaches that were talking to me, but there wasn’t anything on the table. My mom and I went back and forth for a long time about it, and she told me that if I didn’t pick the school that she was going to pick the school. My dad made her understand that she wasn’t the one that had to go there, so she couldn’t make that decision for me. At first she was kind of hesitant, then she realized that my dad was right. I actually went to an unsigned senior showcase in April. They had a big tournament and my AAU team played in it and this coach named Dana Ford was there on the sideline and he saw us play one game, and I had a really, really good game. He spoke with my coach and he wanted to talk to me, so he came back with the whole coaching staff and watched me play in a 3-on-3 setting. It wasn’t a 5-on-5 because everyone didn’t show up, so we played 3-on-3 and the coaches saw enough in me that they told me they wanted to bring me on a visit and they saw a lot of potential in me. When my coach told me Tennessee State, I had never heard of it. My dad told me to take the visit, and that I didn’t have anything to lose because I only had one offer. I really liked the coach. He basically told me that I wasn’t going to get anything, that I had to work for everything, and that’s the type of coach that I want. I never wanted to be given anything, because I never was given anything. I always had to prove myself. I took the visit and when I got there I saw so much, I liked the atmosphere, the staff, the campus. Once the first day was over with, I called my mom and told her we didn’t have to look anymore, I found my school. That’s how comfortable I was. It was amazing, I signed three weeks before my high school graduation.

What was your college career at Tennessee State like?

I actually got hurt my senior year. I tore my meniscus midway through the season in December, like  three days after my birthday. I tore my meniscus and I sat out 10 games. I missed the first 10-games in our conference, but I ended up coming back the last six. I finished strong, but unfortunately we lost in the semifinals. Once that happened, I had to realize that my college career was over, and I started to focus on my pro career. I knew I had to potential to play, it was just a matter of where I would play, and I never stopped working. My strength coach, my trainer, they pushed me, and that’s what helped me get to where I am today. I praise those guys because they worked their butt off, man. My head coach believed in me. He pushed me my entire four years there. It was nothing but growth, and that’s what helped me as a person not just on the court but off the court as well.

You never got to celebrate getting drafted. What was it like following the 2013 NBA Draft?

Not getting drafted was motivation. That was [what it was] to me—motivation to go out there and prove myself once again, and I never put my head down about it. I knew another opportunity was going to come, it was just when. Before the draft was even over, I had signed with Houston and my agent was working on that from the very beginning. I played in the Portsmouth Invitational and I worked out for Houston as well. I had a good workout and I did the workout hurt, but it all worked out in the end. I embraced it, and I learned a lot and I experienced a lot. Going to a small black school helped me and prepared me. Not a lot of people will have the experiences that I had…I grew up, and I learned from it. I had a lot of adversity and I worked that much harder to try to prove myself.

What’s your role on the Sixers?

I’m the guy that has to go against the best player each and every night, so my tone and everything sets us as a unit…guys build off of what I do. If I make it hard for the other team’s best player and then my teammates see how much I’m putting into it, it builds them up, too, and they match it. That’s what’s unique about this team, guys are willing to take on the challenge as well.

You are a success story. You got to the NBA from a small school and made a name for yourself. What would you say to someone that is on a similar path?

I believe that it doesn’t matter what school you go to, you know—look at guys like CJ McCollum, Damian Lillard, all guys that went to smaller schools. They didn’t go to big name schools, but they had the talent. They got noticed and just because guys go to smaller schools doesn’t mean that they’re not talented enough to be in this position. It’s all about how hard you work, not about where you go, or what you do. As long as you work hard, that will get you to where you gotta go. Big name schools, a lot of people go based off the name, not based off the talent, so it’s a lot of guys that are out there who are talented. If you have the work ethic, and the drive, they will find you.