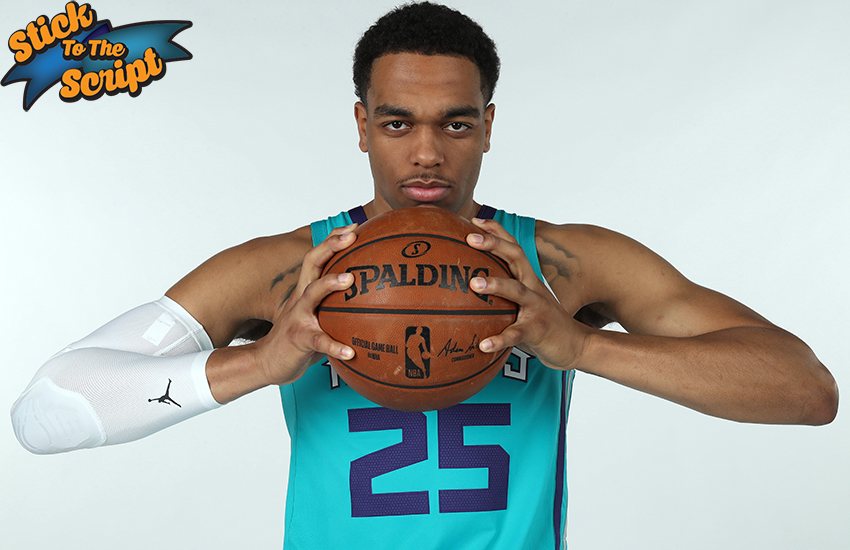 When it comes to PJ Washington of the Charlotte Hornets, it is safe to say that basketball was infused into his DNA. As the son of two former colligate basketball players (Sherry and Paul Washington Sr. both played at Middle Tennessee State), his path to the highest court in the land was forged long before he first picked up a ball.

The 21-year old rookie has quickly become a fan favorite in Charlotte and his name has managed to stand out among rookies. Through the first 10 games, he is averaging 13.5 points, 6.2 rebounds, 1.4 steals, while shooting 51 percent from the field. The numbers speak volumes, as he has shown true ability and prowess beyond his years, giving the Hornets’ franchise hope with his potential to emerge as a star.

I spoke with him briefly before the matchup earlier in the week against the Philadelphia 76ers where he answered a few questions on his style of play, his family and time in Kentucky.

Can you talk about when you first began playing basketball, and when did you know that this dream could be a reality?

Would you say that started at Findley Prep?

Honestly, yeah, around eighth grade, ninth grade, that’s when I felt like it could really happen.

And then going to Findley, and being on that big stage, you were able to come into your own, can you talk about that?

When I first started playing in middle school, I was the most skilled on my team. My dad pretty much made me do everything—I was comfortable with dribbling the ball, passing ball, doing a lot of different things on the court—so once I got to the bigger stage it was kinda of normal for me, so I was just confident in my own abilities.

College was an even bigger stage. Can you talk to me about your time down at Kentucky and how it helped you get to where you are today?

It was tough. When I first got there Coach [John Calipari] told me and told everybody that you have to work for everything you get, so everybody pretty much was trying to be THE guy. You can’t have 12 [main] guys on the team in college; unfortunately you can only have one or two. The first year I was trying to find role, and once I found it towards the end of the season, I tried to build off it and try to be the best person in that role. Then in my sophomore year, I tried to be aggressive from the first game on, and then it kind of opened up for me.

Would you say that coming into your sophomore year, you knew that you have to eat, because A) it’s Kentucky, and B) you had your sights set on something bigger?

Do you remember the first NBA game you ever went to?

Um, growing up I went to a lot…a lot of them in Dallas. I don’t remember the first one, but the one I remember the most it was Carmelo [Anthony] and JR Smith when they were in Denver—they were literally hitting every shot, and I think it went down to the wire. Denver ended up winning and they both had like 30 points and I was like: Wow, like they weren’t missing out there and I was excited to see that happen.

Now you’re up close and personal with it.

Oh yeah, it’s definitely exciting. This is my first time in Philly, and I’m just excited for the game.

So to keep that legacy.

I’ve been wearing it since like, third or fourth grade.

Yeah, I’ve always been wearing it.

How does that feel man—especially now that you’re wearing it in the NBA?

I mean after a while, I was like, yeah this is going to be my number. Growing up, I definitely felt good because it’s my dad’s number obviously, but now I’m just like, it’s my number, so I’m just happy they [Charlotte] had it open for me, and I was willing to take it.

Are your parents your biggest basketball influence or were there other people that you looked at like, I really want to watch him play or add that to my game or her?

When I was a kid they definitely were, and then obviously I played with Coach Penny Hardaway and I kinda looked up to him a lot, he kinda gave me the in’s and out’s of the game, so I would say three are the biggest influence in my whole life.

And Hardaway wore 25 in college.

It’s always been with you.

In today’s NBA, your position is a stretch 4, or wing, but you’re versatile, and people are talking about your stats, but you rebound, can we talk about that?

To be a good player in this league, it’s about the things you do every night. Even if you’re not shooting the ball well, you can always defend, always rebound, always find other people. I just try to do those things every night. If my shot is falling, it’s going to fall. If it’s not, it’s not, but I know I’m going to rebound, defend, and block shots, stuff like that.