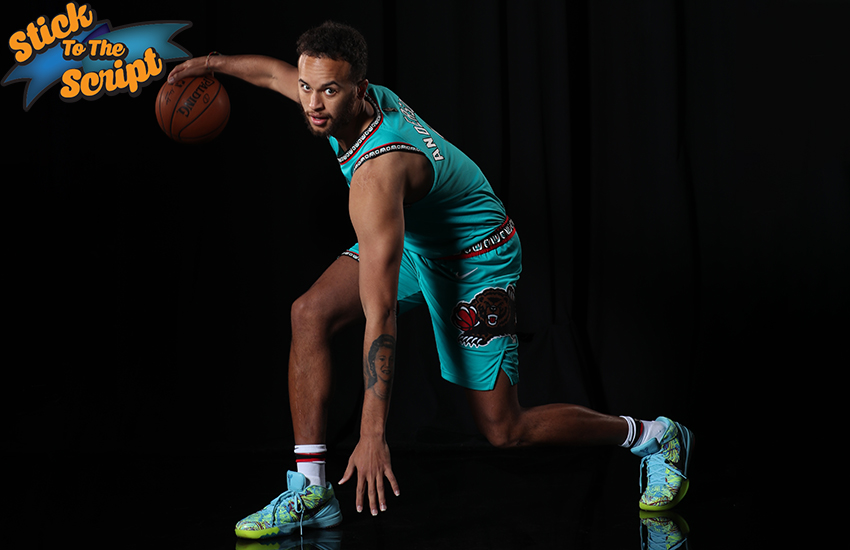 Basketball can provide many opportunities, and when it comes to Kyle Anderson, it has not only afforded him to complete at the highest levels, he feels at peace, playing the game that was passed down in his family by his father. He picked up a ball before he could walk and it did not take long before he became one of the the top players in the country as a senior in high school. He was named the 2012 New Jersey player of the year, and he earned McDonalds and Parade All-American honors. Anderson took his talents to UCLA, and the accolades continued to be bestowed upon him; he was named to the All-Pac-12 second team and the Pac-12 All-Freshman team. Shunning one-and-done, Anderson decided to return for his sophomore year, where he moved into his natural point guard position and immediately flourished. He became the first player in the history of the Pac-12 to get 200 rebounds and 200 assists in a season, as well as the first Division I player with at least 500 points, 300 rebounds and 200 assists in a single campaign. Anderson declared for the 2014 NBA draft, where the San Antonio Spurs selected him with the last pick of the first round. Currently he suits up for the upstart Memphis Grizzlies, with averages of 5.3 points per game, and 4.0 rebounds, while shooting 49.3 percent from the field. I spoke with him prior to a recent game and he expounded on growing up with a lifelong love of the game, his time as a collegian, and much more.

The basketball scene in the New Jersey/NYC region is crazy, what are your thoughts about it?

It’s a different kind of feel…you know the NYC basketball scene—you have the playgrounds, the great streetball legends—but you also have some good organized basketball players that come out of there. It’s a different type of culture, and you really have to be a part of it. Everybody asks: How’s Dyckman? How’s the Rucker?and it’s like…it’s cool, but you have to come out and see for yourself. I can tell you this and that, but you have to come and see for yourself. High school basketball is big in New Jersey and New York. It’s just special, man.

You have your St. Pat’s, St. Benedict’s, St. Anthony’s…legendary programs.

That’s three-schools in 10-miles of each other, all within the top 5 of the country.

You have your small schools—Patterson Catholic, Union Catholic—why do you think they get overshadowed?

I’m not sure really.

Yeah, I’m not sure really. Maybe it’s the Catholic school system…I’m not sure why it does, but we always…there’s always four or five schools in the top 25, when it comes to New Jersey basketball.

How did you get into playing basketball? What was your journey to basketball?

When you talk about Jersey City, my dad was a coach at [Henry] Snyder High School in Jersey City, right on Kennedy Blvd. So, for as long as I could remember, after school, we’re in the gym, from 3:30, until 9 at night. I just grew up in a high school basketball gym. Basketball is my life, that’s all I knew. If you grow up in that area, you know sports is prominent in that area, and I choose basketball. It’s what my dad was doing. And he’s my superhero, so I watched him do it. So I wanted to become a part of it.

Okay, so how did you get across the country to UCLA?

How couldn’t I? You know, the weather was beautiful and that’s just aside from the basketball, the tradition, all the great players that played there. All the resources that they have, and then it’s 80 degrees in January. I wanted to get out of my comfort zone. You know, I was thinking about staying close to home, Seton Hall, but I didn’t want to stay home and have everything done for me, and catered to me. I kind of wanted to venture out west and make a name for myself out there, but also like, kind of grow up out there, too…being on my own. It was an experience and I was happy that I made that decision.

Wouldn’t you say that being that far away from home, prepared you for your life today?

There you go! Definitely, just being alone on Christmas… I had a tough time trying to figure things out. I have two sisters, and my mother, so they would always wash my clothes, so I had to learn how to wash clothes, learn how to do things on my own. I wanted that, I didn’t want the shock to come down the line, I wanted to prepare for it then.

I know the summer runs are special at UCLA. Did you have a moment when you knew you could play at this level in the league?

I knew I could since I was 7 years old. I knew I had a different love for the game. I always knew I would give my all to it, and I would hear “I’m too slow, you’re not going to be able to play point at the next level, do what you do at the next level,” things like that. I just never listened to it, I’ve always had a different passion for the game. I absolutely love basketball to this day, so I never really let someone else tell me what I wanted to do with my life. I knew it was in my hands.

Let’s talk about Coach Niele Ivey. She’s super accomplished in her own right, but now she’s working with you guys, how is that experience for you?

It’s dope. It’s dope to see. This is my second time being on a team where there is a woman on staff. It’s never really…it’s a sense of respect…they know the game, too. They know the game probably better, so it’s not like you’re going turn your nose up at her or anything. It’s being around Becky [Hammon] and being around Coach Ivey, it’s like…they really know the game, they’re really going to help you out there. That’s something I respect, and it’s just cool having a woman around. Both my experiences, with both of them has been great. I love the idea, I think the NBA needs more of it and I think it’s headed that way.

Yeah, I actually always wore Kobes when I could, they’re comfortable. I’m somebody that cannot change shoes. I’ve been wearing those shoes all season. I can’t switch up shoes. I’ve always worn Kobes since high school, but then with everything that’s happened recently, if you want to go out there and represent him and everything he stood for, what he mean to me as a player… I never grew up as a fan, but I appreciated how he helped guys around the League, or how he transitioned into life after basketball was very impressive. It’s just an honor to go out there and wear his shoes.

What was it like getting on the court against him?

Yeah, it was pretty crazy. I actually couldn’t believe it. I had a moment like that with Dirk Nowitzki, a week or two before that my rookie year. That was like my guy, so Kobe was kind of the same thing. I was like, that’s really him right there. We’re about to go against him but it was a pleasure, because it’s kind of fun playing against those big names. It’s what you think of when you’re 8, 9 years old on the basketball court, you think about playing those guys and it’s kind of cool to see it on the floor.