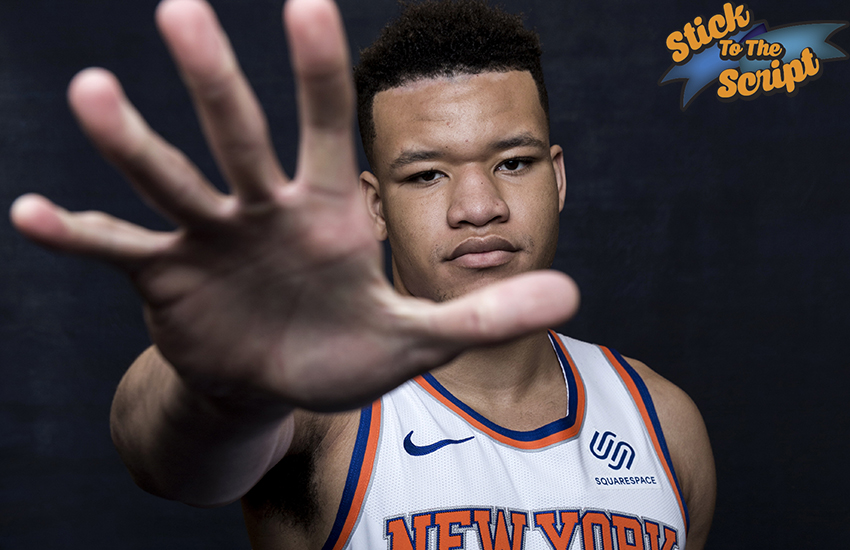 Kevin Knox II of the New York Knicks is no stranger to sports at the professional level as his father played for Florida State University, and eventually as a wide receiver in NFL. The second year forward from Kentucky has experienced a lot during his short time in New York, and the road has been full of lessons, and learning. The 2018  SEC Freshman of the Year became the ninth overall selection of the 2018 NBA Draft and the Knicks envision him as part of the future of the franchise. Knox’s career averages of 11.7 points, and 4.1 rebounds show his potential. We sat down with Knox to talk about his dad, his journey to the NBA and his favorite players growing up.

I’m sure when you were younger that you wanted to play in the NBA, can you tell me how you arrived here?

Well, basically it’s just a lot of hard work. My pops, he raised me, my brothers and my little sister to always work hard. I mean, he made it to the highest level playing in the NFL, so he kind of knew what it took to get here so he kind of pushed us, put that work ethic in us, and it carried over to now.

Was that something that was always around—like a ring that you could look at and aspire to?

Yeah, always. He always had them [rings] around the house. He obviously had it locked up safely, and he used to always show me when I was growing up. I used to put them on and stuff like that, wear them around the house, but that’s just motivation, trying to get to where he was at and to try to get me a championship one day.

Talk about high school: You were tearing it up in high school and you could have pretty much went anywhere. What was it that made you want to play for Coach John Calipari at Kentucky?

Just his résumé of getting guys to the League. He kinda just kept it straight with me through the whole recruiting process. I mean coach KP [Kenny Payne] was a big part of me going there as well. They get a lot of guys because they keep it real with you at all times and they push you hard in practice. No matter who it is, they are always going to play you in practice, push you in practice and that’s something I really wanted, and kind of how it was growing up for me, so it’s kind of basically getting me ready for the second part of my life.

I spoke to PJ Washington, and he was telling me the same thing.

He said that it took him two years to get to that point in Kentucky. What was it in one year that you were able to go to the next level? Did you have a specific moment?

Everyone wants to be a one and done. For some people it happens, for some people it doesn’t…but I know throughout the season I got better and better, so I knew when the time came. I made my decision later because I wanted to make sure I was making the right decision so I was definitely thinking about going back to school my second year as well. A lot of people don’t know that but I really love Kentucky, I wanted to go back and get better but I had a great opportunity to go top 10 in the draft and I just took it.

Who did you look up, or pattern your game after when you were younger?

What was it like when you had that moment to go against him?

Yeah, it was cool. I always watched him. They had a camp when I was in high school and he was there, but I never got to play in an actual game against him, so it was pretty cool, it was fun.

Playing in New York, there is a lot of media attention, but it sounds like growing up this is something you were prepared for.

Yeah, that’s why a lot of people go to those big time schools to prepare for NBA. Kentucky is on TV almost every single night, so it’s one of those schools, where you just go there and you’re going to get that media attention and have that type of atmosphere that prepares you for the NBA—that’s another reason why I went to Kentucky.

What would be one piece of advice you would give your younger self to get to this point, now that you know what to expect?

Probably the same thing: just keep working hard. Work ethic is a big thing, a lot of guys get to the League and they stop working hard because they get the money and stuff like that, but you have to have motivation to keep playing and to keep going. Family is a big thing for me, so I have always motivated myself to go out there to play hard. I have younger siblings that look up to me, so that’s what motivates me every single day, too.

You’re wearing PUMA. RJ’s [Barrett] wearing PUMA. You have Knicks legend Clyde [Frazier] who is the brand’s most iconic star. Talk about that history and now bonds with your teammate.

It’s good to have another PUMA guy on the team. PUMA’s getting big around the League. I was the only one last year, so it’s good to have someone else in the locker room wearing them as well.