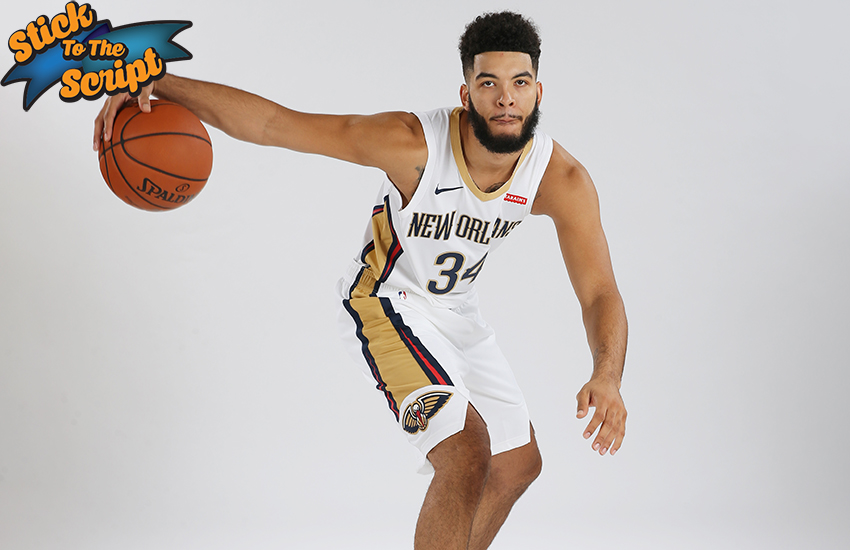 Kenrich Williams played collegiately for TCU, leading the Horned Frogs for three-years after transferring from New Mexico Junior College. He made an immediate impact and he quickly became the big man on campus. In spite of the accolades—Williams was named to the preseason Big 12 honorable mention and second team All-Big 12 honors during his senior season—he ultimately went undrafted in 2018.

He signed with the Denver Nuggets summer league team, and he played well enough to receive a contract offer from the New Orleans Pelicans. During his rookie season, he was assigned to the G League where he continued to use the opportunity as a proving ground, showing his worth as a bonafide NBA player.

Williams is affectionately known as Kenny Hustle from his conference leading rebounding titles with TCU. He is a versatile player who plays both ends of the court, doing whatever it takes to help the Pelicans, averaging 3.9 points and 5.2 rebounds.

Through it all Williams stays ready and willing to contribute whenever and however he can. I had a moment to speak with him before a recent game last month. He spoke fondly of his alma mater, his love of exploring NBA cities and more.

Can you talk more about your road to the NBA and how that helped you mentally?

Like you said, everybody has a different path. Some get drafted, mine was a little different. I went unrecruited and I went the junior college route, and I didn’t get drafted so I was overlooked at every stage, but I think what it does for a lot of players in my position—it puts a chip on your shoulder and makes them just work even harder to get to where they’re at, and I think that’s the mentality that we all have. I’m not saying that people who get drafted don’t have that mentality; it’s not the same type of chip on their shoulder.

So when you look at it, it has given you a slight edge.

What does that do for you now that you’re here? Obviously you have the chip on your shoulder so that makes you work hard, but it also makes you appreciate things more?

For sure, it makes you not take things for granted—like, I remember riding the Greyhound [bus] in college, or having to ride the Greyhound just to go back home. Now I’m taking you know, the charter flights and stuff like that; the seats are laid back.

For real! You get to sleep and stuff, so I don’t take anything for granted you know what I mean, and that’s how it is.

Talk about making the most of your opportunities. You maximized every situation to get here.

You know it’s different, because I didn’t really play AAU basketball. I played for a year and I played with my local team in my hometown. Just for me to be here is really just a blessing. Just to really be able to get it out the mud you know what I mean, and take advantage of every opportunity like you said. Last year, I got a shot to show what I can do and it’s only been up from there.

When you got to the G League what was your mindset?

Do you go back to TCU?

Are you a big football fan?

Okay, because where you’re from it’s football, it isn’t basketball.

Talk about that a little bit.

Yeah, I played football until my sophomore year of high school. I’m a big football fan, I thought I was going to go to the NFL. This worked out for me, but football is huge, especially at TCU. We got a change to turn the program around basketball-wise. It’s good to be around the football team and then you have the basketball team right there.

You don’t want to get on the court with the football team.

No sir [laughs], no sir, you definitely don’t. They have to do their own thing. It’s a different type of feeling.

A different type of energy.

A whole different type of energy.

Think back to probably when you were in high school. What would be something that—now wearing an NBA uniform, in the league as we say—you would say to encourage yourself, like, “Look dog, it ain’t going to be pretty, but I got you.”

One last question: Some cats in your position can’t lead a “normal life”—they can’t go to the Apple Store, they can’t walk down the street—are you able to do that and if so how do you feel about that? Would you rather it the other way?

For sure. I go anywhere. Any city, I try to get out in any city—walk around, explore the city. A lot of people, they don’t know me.

Every now and they might recognize me, but for the most part nobody knows me. They can’t really recognize me. They see I’m tall, probably play basketball.

Right, might have something, but other than that, they don’t know me so I go around every city and explore. I get out and see firsthand because I never been to any of these cities.

Do you enjoy that or would you rather be a little…let me get a pic for the ‘Gram?

Nah, I enjoy where I’m at right now, how everything is going right now. I’m not a big social media type.

At TCU, people are stopping you.

For sure, yeah, for sure. It’s always love, it’s love at TCU.