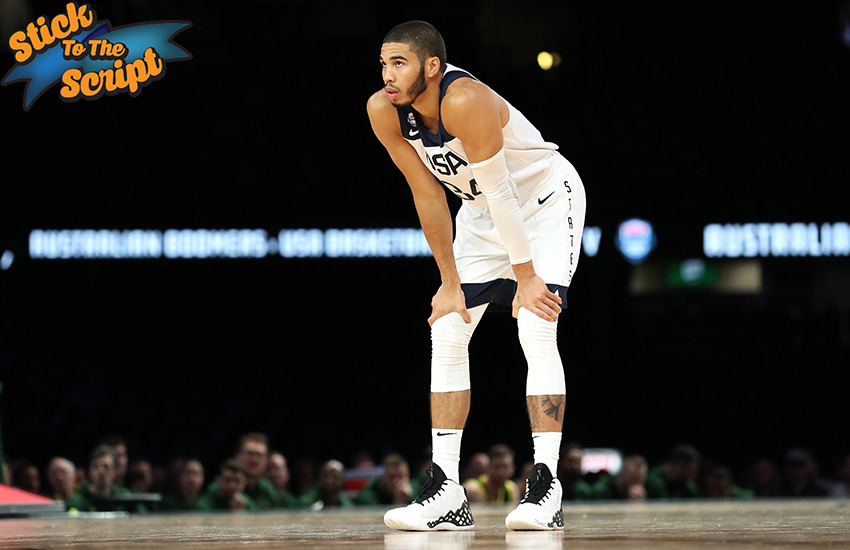 Team USA has traveled the globe as they are prepare to compete in the 2019 FIBA World Cup, a qualifier for the 2020 Olympic Games in Japan. Many of the invited top tier NBA talent have pulled their names from the roster, opening the doors for some fresh new faces to play internationally and represent their country. One such player in particular has burst onto the scene with thunderous dunks and a knack to knock down the open look from beyond the perimeter. As one of four members of the Celtics vying for a spot on the red, white and blue, Jayson Tatum is using the USA Basketball as his summer proving ground to stardom.

Some of the faces will change from this summer to the next, yet Tatum has already made a strong argument to solidify his spot for 2020. I had an opportunity to catch up with him in Philadelphia prior to and then again during training camp, as we spoke about what it means to play for Team USA, signing with the Jordan Brand, raising his son and more.

You traveled to Philadelphia before heading out to fulfill your national team mini camp in Las Vegas. Why did you stop here?

My grandfather received an award from his fraternity [Kappa Alpha Psi Fraternity, Incorporated], so it worked out that I could be there. His name is Ruben Shelton III. I had some free time before USA Basketball on Monday, so I came down here.

You got your cut. I know Jules [Gutierrez] hooked you up.

Yeah you know, I had to get that fresh cut before getting on the road.

What are your thoughts on the national team?

It’s not a lot of per-se superstars. It’s a lot of talented guys, a lot of guys that have proven themselves, a couple young guys out there—like myself, [Kyle] Kuzma, and Donovan Mitchell—but everybody out here can play.

Talk about playing with Team USA, what does it mean personally to you?

It’s something that I’ve always dreamed of. Obviously it has come a lot earlier that I had expected, being 21, but it’s what I love to do, so I embraced it and kept working.

No doubt. Let’s talk about the Jordan Brand…I think it’s a really good look, not only just for you but it creates a lot of buzz for the League. Jordan, a UNC guy, signed not only Zion Williamson, he also signed you, two Duke guys. Can you talk about that partnership and what it means.

Yeah, it was cool. The unique part about it is…whoever signs with Jordan Brand, you know Michael Jordan specifically selects them, so just getting the ultimate nod from the greatest player ever, so I’m super excited for what’s to come with Jordan Brand. You know, myself, Kia Nurse, Rui [Hachimura], Zion [Williamson], a lot of new faces…so I’m excited.

During the season I’ve asked you about fatherhood and you have Deuce with you today. What’s it like knowing that you can provide for him and do something different than what you had as a kid.

It’s the best feeling in the world. I didn’t expect to have a kid at 19, but everything happens and I’m loving every bit of it. I’m with him as much as possible. I take him on the road during the season and playoffs. He’s with me now during the summertime, so wherever I go, he goes.

Yeah…has has as many shoes as I do.

I remember asking you about taking 9th Wonder’s class; did you know about it going into that summer? Was everyone talking about his hip hop class? Did some of the former Duke players tell you to take this class? How did you get into it?

I know but he told me he wish he would have.

You know, it’s just everybody that comes through there gets the recommendation and I’m glad I did. It’s my favorite class. I obviously know who he was before I took the class, but I didn’t know how big of an influence he was and how much we learned about hip hop culture and things like that, so I’m glad I took it.

Who did you tell to take the class?

Umm, who was after me? Marvin Bagley III, Gary Trent Jr., those guys.