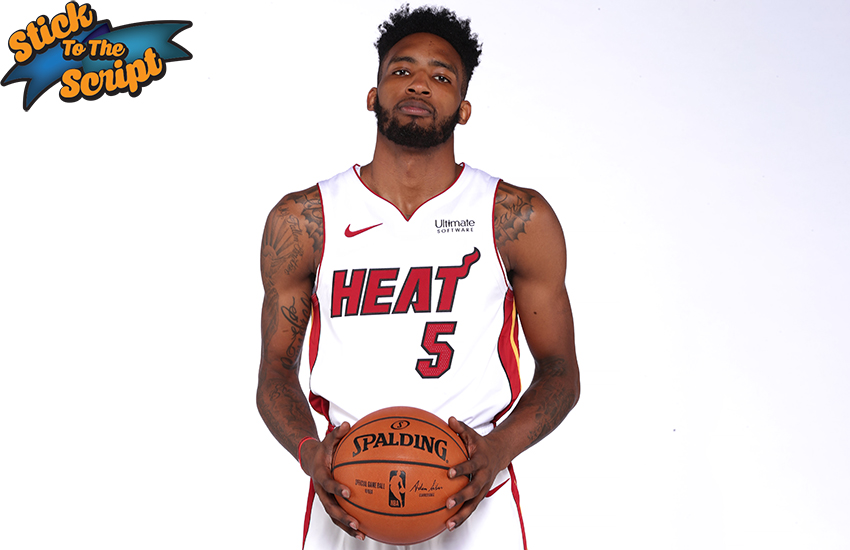 Derrick Jones Jr. shook up the basketball world during All-Star Saturday. Both he and Aaron Gordon put on a show that will be discussed for years to come.

Jones walked away with the hardware, while Gordon vowed to never compete in another NBA dunk competition. Agree or disagree with the so-called controversial decision, but the youthful, lefter-handed, wing from Chester, PA stepped up and jumped into his destiny as one of the more prolific dunkers of his time. His former assistant high school coach, James Clark of Archbishop John Carroll recalls his immediate thoughts upon seeing Jones walk into the gym, stating, “[He had] athleticism that was out of this world…first time I saw him at practice, I thought to myself, ‘If this kid could ever get a jump shot, he’s going to be dangerous.'”

He expounded further: “I wanted to improve his handle and work on his midrange jumper…at the next level [NBA] he needed to have a consistent jump shot and be able to finish around the rim when he couldn’t always dunk.”

Jones entered the League in 2016 after going undrafted as an early entry out of UNLV. He eventually signed with the Suns, making the opening night roster. A brief stint in G League Northern Arizona Suns gave him enough leverage to sign a two-way contract with the Miami Heat in 2017. He played with the Heat G League affiliate Sioux Falls Skyforce before signing with Miami in the summer of 2018. The rest has been a boyhood dream come true, and with averages of 8.7 points, 4.2 rebounds and a shooting percentage of 49.4, he has proved to be a valuable contributor for the Southeast Division-leading Heat.

I spoke with him on several topics including the recent victory, his hometown, Vince Carter and much more.

A few weeks ago, you talked about how this is important for you. How does it feel winning this dunk contest on your birthday?

It feels great. Just being able to get an achievement like this on a day like this, it’s special for me. This is a day that I’m going to tell my kids, just make sure they know that this is a day for me.

I know it’s a lot to process in the heat of the moment, but have you had a chance to think about where this Dunk Contest is going to rank historically?

No, I didn’t. That hasn’t even sunk in yet. I’m going to be honest with you, this is looking like a dream. I only dreamt of this moment, having this hardware right here, taking it back to Miami with me. Once this stops feeling like a dream, that’s when I’m going to start thinking of that.

Talk about Vince Carter. He has said you’re the next person to watch and follow in his footsteps.

Vince is a very cool dude. Just having that conversation—it’s great being able to talk to a vet like that, somebody who has been in the League for so long and somebody that you looked up to as a child. It’s real. Your idol becomes your rival, and for him to put my name in a conversation like that is great. I’m very grateful, and I’m thankful for that—just a relationship that I build with a guy like that—it’s just great.

How did you and him meet and get to this point?

It was actually my rookie year. He was in Memphis and I was playing in Memphis. I was warming up, and he was out there warming up at the same time. After we warmed up and everything, I was sitting on the scorer’s table and this was right before the All-Star break, and he came up to me and just told me to just go out there and have fun, just be yourself, they called you for a reason…so just go out there and have fun and be yourself. Nobody knows it but, if you go back and look at the little film when they was in the locker room for the All-Star Weekend…you’ll look in my locker and you’ll see a Vince Carter jersey, cause I was going to do a couple of his dunks in my All-Star Weekend thing.

When you play in Philadelphia, what’s it like being so close to home? For the people that don’t know, they think you’re from Philly, but you’re from Chester, and I know you take pride in that.

I will always be from there, I never change up from that.

So what’s it like being a parent? It wasn’t that long ago when you were in Philly playing at the different tournaments like The Chosen League, and things like that, and now you have different responsibilities. What’s that like?

Yeah, [smiles] it just made me mature a whole lot, you know. I’m a 23-year-old young man, and just to have three boys. I had my first when I was 17. It just made me. My mindset just changed. It just told me that I have to make it, and I have to stick no matter what, cause, I mean, when my kids grow up, I want them to…dream, I want them to fulfill that dream and never give up on it. That’s one thing I’m never going do. No matter the ups and downs, no matter the turns, or curves that come my way, I’m never going to give up, and keep fighting through whatever I have to fight through.

Is one of your kids Derrick Jones III?

What about that legacy? Was it a no-brainer for you?