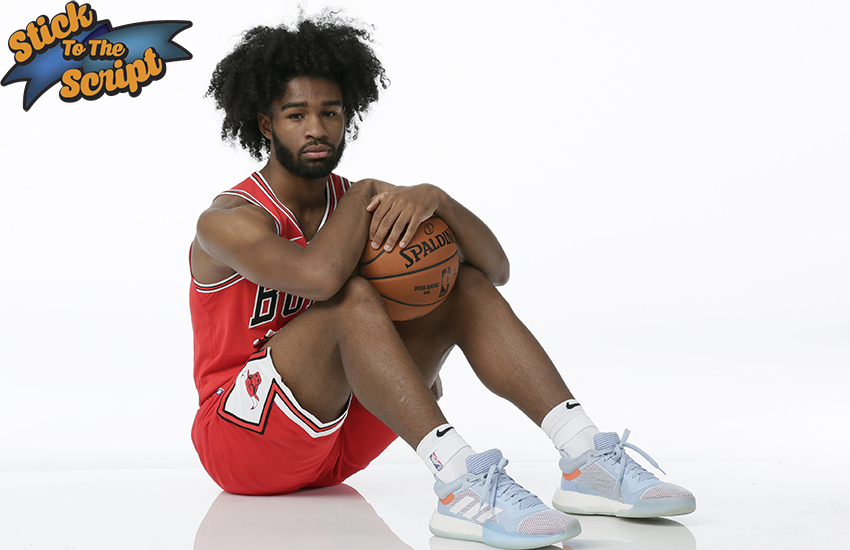 Coby White is a charismatic, playmaking, stylistic rookie for the Chicago Bulls. He believed and bet on his abilities early on when it was far from the popular thing to do. His upbringing and tightly knit family, helped him to achieve and preserve far beyond what he was projected to be.

Standing 6-4, he adds length and versatility on both ends of the court, and his speed literary helps to separate him from the proverbial pack. These are the qualities that enabled him to be selected in the 2019 NBA lottery as the seventh overall selection from the University of North Carolina.

The Goldsboro, NC native has emerged as a solid contributor for Chicago with averages of 11.1 points, 3.4 rebounds and 2.2 assists per game. He enjoyed a stellar high school career, finishing as the all-time leading scorer in the state of North Carolina. As a senior, he was awarded Mr. Basketball, and named for 2018 McDonald’s All-American game.

His path to the League has been steady, as he undoubtedly puts his family first above everything else. He went all out in his second-career game, pouring in 25 points off the bench. Filling up the basket seems to come naturally as he combined for 42 points after coming off the bench in the first two games.

I approached him prior to a recent game and we had a good conversation about being underestimated, the reason he wears the number 0, and a lot more.

You worked hard and now you are here with the Chicago Bulls, what has it been like for you to get to this point?

It’s been a long road to prove myself time and time again. I feel like in high school I was overlooked a lot, not a lot of people imagined me being here when I was in high school.

Even with the numbers you put up?

Yeah, I saw a video, the other day. It when I was going into my senior year. I was playing AAU, and I was playing on ESPN. We were playing in this Las Vegas Classic and the commentators were like the people who do the rankings.

Yeah the experts. I heard them broadcasting the game and they were talking about me and my teammate going to Carolina, and they said Roy Williams has two good players coming in—two four-year guys. I remember that, I remember going back and seeing the highlights and I remember them saying that. That was just a reminder: Supposedly the experts—the people that know it all, who know you the best, besides yourself—are telling you I’m a four-year guy. I went to Carolina with a chip on my shoulder for sure, proving that I can play with the best of them, and I think I went out there and I did it, and here I am. But you know, it was countless hours in the gym like you said—sacrificing a lot throughout high school, throughout college—and you know, it was all worth it…hearing your name called on draft night.

You went through some personal tragedy in your family…

Yeah, life is a journey, like you said. Life itself is a journey, you’re going to go through ups and downs. You know with me, I went through some downs, also had some ups, but like I said, it’s a blessing for me to be here. When my dad died, I could have taken it two different ways: I could have went down the wrong path, but basketball was one of my best outlets. When I was on the basketball court, my mind was free, I wasn’t thinking about nothing but hooping…it’s my first love and it’s a big thing for me.

No, not really. My dad was more of a showboat type of dude.

You have a little bit of that.

I got a little bit, but not like they say he was…but they say he was really good. My dad, when he was in college, he made some poor decisions, as a lot of people do, make mistakes. But like he always said, he never regretted anything he did because he had me, my sister, my brother, so he raised three great kids.

Knowing that you were able to go one-and-done, what do you carry with you? Everybody carries something with them on that court. You definitely play smart, you play hard, I also would say, you’re really confident in what you do. Where does that come from?

I honestly think it comes from all the time that I put in to becoming the player that I am. Without confidence, I think I wouldn’t be where I’m at. I think confidence is a mental thing. First, the work that I’ve put in and for me to just trust in myself; and second my family, they believe in me, they know how much work I’ve put in, and they believe in me and they want me to be great. So with them behind me, I feel like I can do anything.

When was that moment, when you know you could play in the League? When did that hit you?

It hit me my senior year of high school. I went to the John Wall Invitational the big tournament in Raleigh, [NC], I think I broke the scoring record. The way I was scoring and the way that I was playing was the best I was playing my whole high school year. After that, I felt like I could go to the League. And once I got to Carolina, I knew I was going to the League, I just didn’t know how long it was going to take me. Then once we played Duke at home that second time, I got hot in the second half, I was like yeah, I’m leaving.

Tell me about your No. 0—what does that mean to you?

Zero just came when I was in high school. I would have worn it at Carolina, but an upperclassmen already took it. But to be honest, if I’m being honest, it came from my favorite video game character, which was Sub-Zero.

So that’s why, that was my favorite video game growing up was Mortal Kombat…favorite dude to play with was Sub-Zero, and once I got to high school, that was it. That’s the main thing where it came from…it’s nothing special.