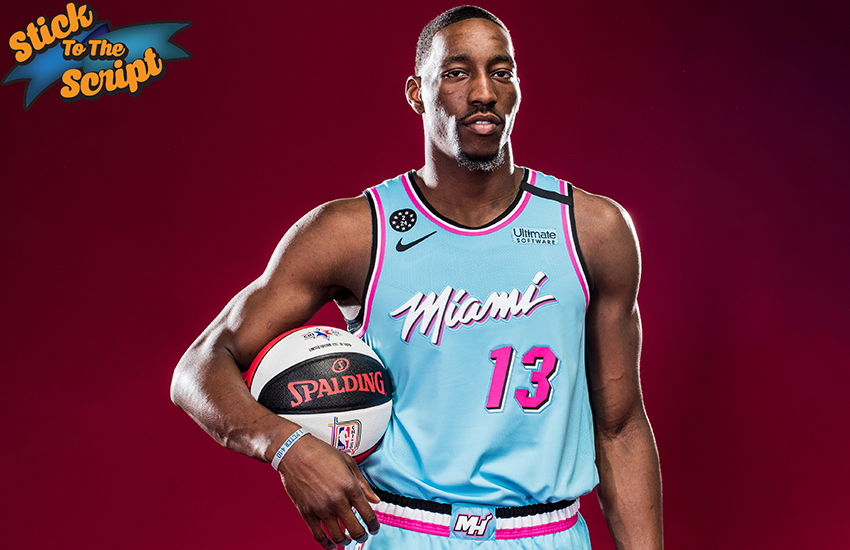 Bam, as described by Merriam-Webster is a noun, meaning a sudden loud noise, often used interjectionally to indicate a sudden impact or occurrence, which defines Edrice Femi Adebayo—the world knows him mostly as Bam—perfectly.

The Miami Heat has made tremendous strides throughout the 2019-20 campaign and a lot of that correlates with Adebayo’s development. Adebayo went on a tear during the month of December with two triple-doubles, and an Eastern Conference Player of the Week honor for the games played from December 9 to December 15. During that stretch he filled up the stat sheet with averages of 20.0 points, 11.3 rebounds and 8.7 assists per game, cementing his first All-Star selection.

Adedayo has worked on understanding what is needed of him, as he has improved his game since entering the League in 2017 as the 14th overall pick. He has since blossomed into a team leader, joining teammate Jimmy Butler to represent their franchise. One of Adebayo’s calling cards in his leap year—he’s putting up 16.2 points, 10.5 rebounds, 5.1 assists, 1.2 steals and 1.3 blocks per contest—has been his versatility on both ends. As a defender he can guard 1 through 5 and on offense, one of the better big men facilitators. He showed off his tool kit on All-Star Saturday night with hardware for the Skills Challenge and assisting teammate Derrick Jones Jr. on his dunk crown.

I recently spoke with him after practice about his All-Star experience, the resurgence of the Heat, his mother and more.

Talk about Dwyane Wade and what he means to you.

Is there anyone in particular you want to dedicate your Skills Competition trophy to?

My mom, and it’s because all she’s been through, all the struggles she’s been through, the living conditions I had to go through, and how she still strived to make me happy and make our house feel home. I can’t do nothing but give her that and keep giving her every other accolade I get.

What’s the bigger picture in regard to you mother?

That’s my mom, man. It’s not only for her, it’s for the name I wear on the back of my jersey, it’s for this organization and all my family members. My family hasn’t had a generational type of player like this before, so I’m just trying to make my family proud and make my mom proud. You know my mom struggled when she was younger raising me, so it’s kind of a dedication to her.

How long did you live in Newark, NJ, before you moved?

So you’re from Newark…can’t take it away from you.

Okay that’s fair. A lot of people didn’t have the Heat where you are today when the season started. You’re a big part of that. Coach Eric Spoelstra talked about Jimmy Butler, but you’re a big part of what this team is doing and where they’re going. Can you speak to that?

Man, you just gotta whole bunch of guys willing to lay it on the line for each other, just put it all out there between the lines for each other. That’s the reason why we’re here where we’re at. I  can’t do anything but thank my teammates. My success isn’t based on me, it’s based on my teammates. All my teammates encourage me, they want me to be better, and we hold each other to a higher standard, and that’s what you need from teammates.

Talk about the Heat and what you and your teammates have been able to accomplish so far.

Just saying that they know how to pick players. They know who they want. They know how to get them, and they did that this year. I feel like Jimmy Butler is a big reason why we’re winning. I know Jimmy says it’s me, but I believe it’s Jimmy, and that’s all respect to him because his effort, the way he goes about himself, the way he carries himself on the court, he’s one of those dude that’s hard knocks. He’s one of those dudes that’s fought through the wringer and he’s trying to win. It gets contagious.

What can you say about the season Jimmy is having? Can you talk a little about the chemistry?

You went to Kentucky and now you have a young guy on the team from there, Tyler Herro, what’s that relationship like?

It’s the same way, like when I came into the League—just get in where you fit in and figure it out. His role is bigger than when I first got here…he’s coming in here with open arms, and he’s under Jimmy’s [Butler] wing. He asks me a couple things, you know I’m still learning…young player in this league trying to figure it out myself, so me and Jimmy [Butler] just try to give him a couple tips [like how] he’s not going to get the calls he wants Hs one of those guys…he’s like a sponge, he soaks up all the knowledge.

Oh yeah, that Kentucky love never dies, we all have mutual respect for one another, whenever we see each other…doesn’t matter who it is.

Not really life lessons, they just call to check up and see how I’m doing.