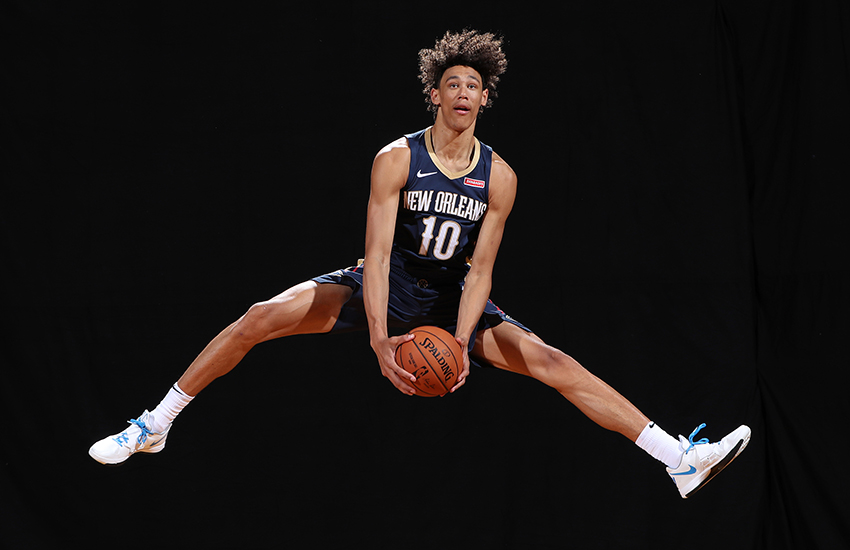 Jaxson Hayes is one of the most promising NBA rookies not named Ja Morant or Zion Williamson. In Summer League he displayed that he more than capable of being the eighth overall pick in the draft. His elite athleticism was on full display and he brought a contagious energy to the floor. In the regular season Hayes is still finding his way as a steady contributor for a New Orleans team that is geared toward the future with Brandon Ingram, Lonzo Ball and Williamson as the stars of the show. Haynes has shown flashes that he has what it takes to be one of the better long term big men In New Orleans if they somehow decide to move on from one of their established bigs. Recently against Chicago, Hayes had a very efficient 14-point and 12-rebound effort against the Bulls. We’ve only gotten a small-sized sample of what Hayes brings to the table, but if this appetizer is only the prelude imagine what the finished product will look like.

How did playing under Shaka Smart at Texas prepare you for life in the League?

Playing for Coach Smart teaches you a lot of things. He’s one of the best coaches in college basketball and he’s one of my favorite coaches as far learning different defensive schemes. He got on me a lot last year about defense and crashing the boards which is helping me a lot this year.

Coming into the League, did you have a list of players that you wanted to either cook or shut down?

No, my mentality is to cook and lock up people every night, I don’t have anyone in particular that I would put on a list, maybe Mo Bamba—I don’t have any beef with him, he’s just my boy. I love to compete against him.

Your teammate Derrick Favors is a big man who has experienced longevity and has some years in the League. What are some valuable things that you learned from him that you plan to carry with you throughout your career?

Just the little things on defense—like watching his foot placement, the way he moves his feet in the pick-and-roll, watching who he’s tagging—just little things like that, those are things that I learned the most from him.

What’s the best advice that you received concerning longevity in the NBA?

Making sure that I take care of my body and making sure that I get my treatment to limit different nagging injuries. That’s probably the best advice I’ve gotten so far because if I do those things, I will have a long career.

What are some things that you struggled with the most in your first year?

I struggled with the physicality a lot at first, but now I’m getting adjusted to it. This offseason I’m going to work in the weight room so I can be more physical in the post in upcoming years.

What separates yourself from other rookies in the League?

I feel like my mentality is different. At the start of the year I came off the bench mostly every game, and now because of the injury bug that has hit our team, I’ve been able to play more minutes, sometimes as a starter and show that I belong. Also sitting on the bench has allowed me to see the game different I can see my coach’s point of view and adjust my game accordingly, longterm I feel that helped me a lot.

How has playing with an All-Star guard like Jrue Holiday helped elevate your game?

Playing with Jrue is the best. He’s like Superman, he does a little bit of everything on both ends of the floor. Playing with a guy like him helps my work ethic because you see him putting in the work day after day—that type of attitude rubs off on the young guys like myself.

How has playing with a pass-first guard like Lonzo Ball helped in your development as an offensive player?

He’ll find you wherever you’re on the court, he’s not scared to throw those 50-50 lobs. I love playing with him, he makes all of us better with his unselfishness.

How would you assess your growth from Summer League to now?

My role from Summer League is a lot different than it is now. My role now is to come in and get good minutes, bring energy to the team and get us going whenever I get in.