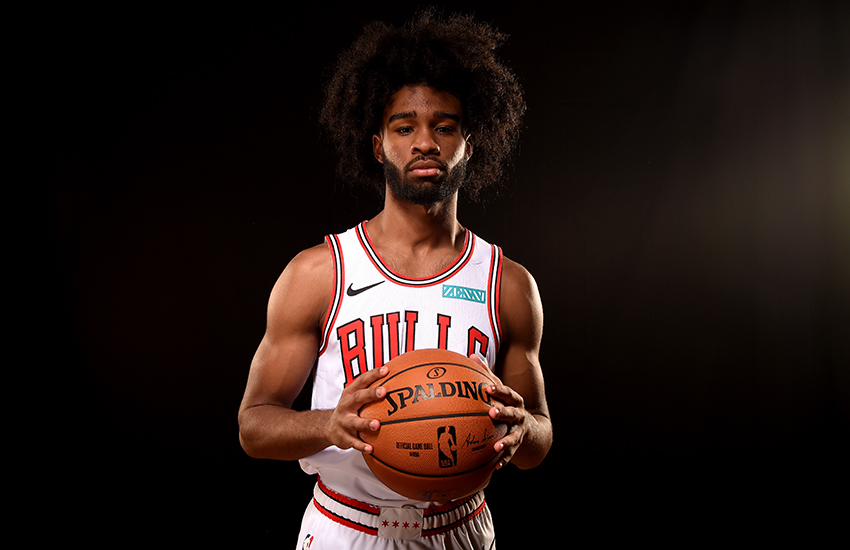 Since being selected with the seventh overall pick in this year’s draft by the Chicago Bulls, life has moved very fast for Coby White. The only thing that has been able to slow things down for the point guard out of UNC has been his adjustment to the city’s traffic.

For a team that’s looking to get out and run more, White’s speed should easily help the Bulls, who finished 24th in transition frequency last season. He also adds another capable scoring option to a team that could get stagnated and predictable at times.

“He’s the best scoring point guard that I have ever coached,” said Tar Heels coach Roy Williams after a career-high 34-point performance against Syracuse’s vaunted zone defense in February. “Ty Lawson got to that stage later that he could really score. Coby is a scorer and I have never minded a scoring point guard.”

We caught up with the rookie point guard at Gary Elementary School on Chicago’s West Side where he was present as SAP Digital Scholars launched their new interactive STEM educational program to help encourage students to pursue careers in technical fields through gamified lessons. In between his participation in the interactive program, White discussed adjusting to big-city life, integrating himself into the community, what he learned from his Summer League experience and what he hopes to accomplish in Year One.

How did you get involved with this program?

My agency came to me with the idea and they always ask me about different things. They never force anything upon me and once they asked me, I said I would love to do it and that’s why I’m out here with the kids and trying to do whatever I can to impact their lives in a positive way.

It’s rare to hear that sense of obligation from a 19-year-old. You mentioned how you looked up to Chris Paul and the impact it had on you when you met him. Is that why participating in programs like this important to you?

Yeah, especially for kids at an early age. I know being where I’m from, it was a lot of kids just as good as me, they were smart and they could have done something positive with their lives besides what they’re doing now. I feel like if we had someone telling us to never give up on our dreams and continue to stay on the right path, it could have impacted them in a positive way and their lives could have turned out way different.

With having lived all of your life up until this point in North Carolina. How has it been adjusting to Chicago?

I think I’ve adjusted pretty well. The only thing for me is the traffic. It’s a pain, but you get used to it after a while. I’m kind of used to it at this point, but I never thought going 2.1 miles could take 20 minutes.

You didn’t play as well as you wanted to during Summer League, but what was it like to get your feet wet?

I’m glad I played in Summer League because it got me reps for the League. I feel like I adjusted well. As a rookie, you’re going to have ups and downs. You’re playing with the best in the world and every day is not going to be great. For me, I have to realize that because I want every day to be perfect and top notch. Some days I go [into practice] and I don’t hit as many shots as I want to and I don’t get to do this and that, but I just keep telling myself that it’s a process. You’re not going to always do as good as you want, especially at this level. The great ones are the ones who come in and get it done every day.

How valuable has it been to have already began practicing with most of your teammates already?

Everyone on the team is back except Tomas [Satoransky] and [Cristiano] Felicio because they’ve been with their national teams. Other than that, everyone has been back for a few weeks now. I think it’s been great for us to jell this early because we have new pieces in me, [Thaddeus Young], Tomas and it’s been big for me to learn from guys like Zach [LaVine], Thad, Otto [Porter]. [Ryan Arcidiacono] has been a big help for me. He’s so smart and knows the game. He’s always giving me pointers on how to run and guard the point guard position.

Even though there is adjustment on the offensive end because of the speed of the game, can you describe the adjustment you’re learning to make on the defensive end?

It’s been different. I’ve never been told to run someone off the 3-point line. Even in college, if an opponent takes a 3, we’ve won the possession. Now, if an opponent takes a 3, it’s such a high percentage shot in the League that we don’t want that. That takes some adjusting to just because of my instincts, which is to close out and contest. That’s been the biggest adjustment—the defensive end.

It’s a cliché question, but what expectations have you placed on yourself this season?

I always say this, but to be the best me that I can be. I know it’s going to be a few ups and downs and not going to be perfect because you’re playing against the best players night in and night out. For me, just come in and do what I do, which is be coachable, willing to learn through any situation and just be the best Coby that I can be.