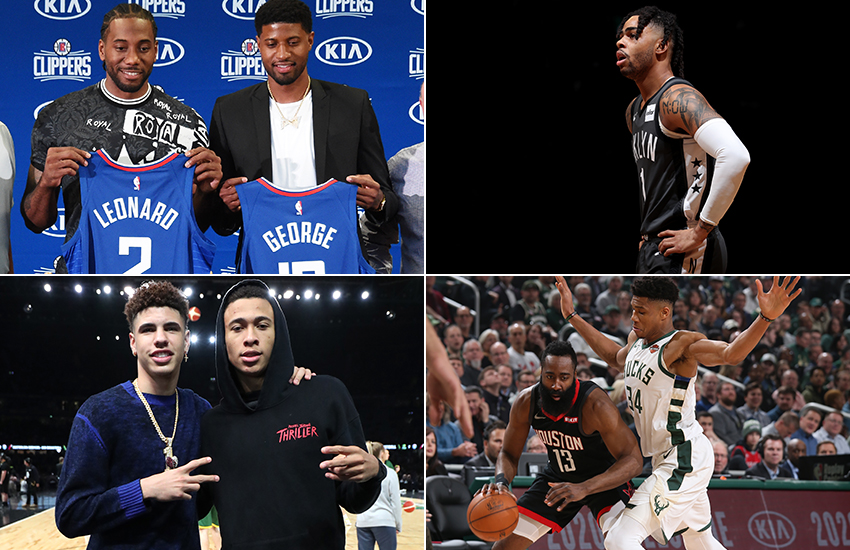 Mike D’Antoni’s Rockets have been a work in steady progress, posting improving offensive efficiency numbers throughout the years (from 104.1 points per 100 possessions in 2017-18 to 104.9 in 2018-19) that kept them in lock-step with the Golden State Warriors at the top of the offensive charts. Only now, with the Dubs sans Kevin Durant and Klay Thompson (at least, for most of the 2019-20 season), the Rockets are ready to surge past Golden State offensively, especially with a healthier Russell Westbrook replacing an aging Chris Paul in the lineup.

What happens when Kawhi Leonard and Paul George—two 2018-19 All-Defense forwards—replace two defensive-neutral forwards (Danilo Gallinari and Tobias Harris) in the starting lineup? And then what happens when that same dynamic duo joins former All-Defense guard Patrick Beverley and future All-Defense center Ivica Zubac in the starting lineup? Well, we cannot say for sure, but we’ll have fun watching this transformation from mediocre D to whatever it becomes.

When the Jazz signed reserve center Ed Davis, Utah pretty much insured it always will have the best rebounder on the floor, no matter who head coach Quin Snyder’s team plays. With All-NBA center Rudy Gobert ranking second in total rebounds in 2018-19 and Davis ranking third in rebound percentage, who else can compete with the team that already finished third in the League in rebound percentage in 2018-19?

If you thought NOLA pushed the pace when Anthony Davis was headlining—the Pelicans ranked second with 103.89 possessions per game in 2018-19—what is going to happen now that fastbreaking Lonzo Ball joins Jrue Holiday in the backcourt? If you are a ferocious finisher like Zion Williamson, you must be salivating at the thought. That said, do not be surprised if the Pelicans have a couple hot teams on their tail in Trae Young’s Atlanta Hawks and De’Aaron Fox’s Sacramento Kings.

The reports of the Warriors’ demise are greatly exaggerated. Consider this: they have four All-Stars who signed $100-plus-million contracts in the past two years (Stephen Curry, Klay Thompson, Draymond Green and D’Angelo Russell), not to mention two talented centers who both gave Dubs management the best bang-for-buck deals in the NBA (Kevon Looney and Willie Cauley-Stein). If Thompson was not dealing with a torn ACL, most people would be predicting a sixth straight NBA Finals appearance.

Strange as it may seem, the Lakers go from being one of the league’s youngest teams to perhaps its most experienced. You will be hard-pressed to find any team’s players who have played more playoff games than LeBron James (239), Danny Green (124), Rajon Rondo (105) and Dwight Howard (95).

Although I am a big fan of Atlanta’s quartet (John Collins, Trae Young, Kevin Huerter and DeAndre Hunter) and Memphis’ trio (Jaren Jackson, Ja Morant and Brandon Clarke), no franchise is in better future shape than the Sacramento Kings, whose under-23 prospect division is loaded with top talents De’Aaron Fox, Marvin Bagley and Harry Giles. Expect the 20-year-old Bagley and 21-year-old Giles to team up with the 21-year-old Fox in the Kings’ starting lineup full-time in this 2019-20 season.

The Clippers return Lou Williams and Montrezl Harrell, who finished first and third in the 2018-19 NBA Sixth Man of the Year voting. If that is not enough bench for you, throw in Mo Harkless, JaMychal Green, Rodney McGruder and Patrick Patterson, and you have a six-man sub set that cannot be topped.

Just when you thought LaMarcus Aldridge and DeMar DeRozan were getting old, head coach Gregg Popovich and Co. developed Derrick White and Dejounte Murray into leaders of the new school, transformed Jakob Poeltl into a strong starting center and made outsiders wonder if 20-year-old wing Lonnie Walker is the next Spur prospect to land contributor minutes in yet another San Antonio playoff campaign (22 straight and counting).

The Warriors quietly renewed the contracts of GM Bob Myers and Coach Steve Kerr, after the dynamic duo masterfully shuffled the 2019-20 deck of Dubs and came away without having to pay nine-figure luxury-tax penalties. Deep down, I seriously believe Warriors ownership is happy to lose Kevin Durant’s max contract in favor of a bottom line that gives them manageable salaries. In the meantime, they still are able to juggle a roster that features four NBA All-Stars in a new San Francisco arena built for them to shine.

As well as the Raptors treated him and as hard as the Lakers pursued him, Kawhi Leonard chose Steve Ballmer’s team as his destination of choice, thereby clinching owner-of-the-year status for the anti-Donald Sterling. Leonard said as much when he told Ballmer that he wanted to play for him, but did not believe his Clippers were good enough to win a championship. Get Paul George, Kawhi said when showed a list of players the Clippers could pursue, and I will come. Ballmer—through his generals Lawrence Frank and Doc Rivers—delivered on the deal, thus solidifying his stature among League stars for years to come, making Ballmer The Man.

Next year, I kind of expect a similar roll-out with these revised Warriors, who this season are without the services of injured Klay Thompson until at least February.

Can they win 51 games? It is possible.

But next year is when I see the Warriors returning to their former 67-win status.

Because their newest All-Star, young D’Angelo Russell is one of the best young shooter-playmakers in the League.

At age 23, Russell has already shown he can create his own shot and get baskets for other as well as anyone not named Stephen Curry or James Harden.

He is that good already.

Now can he become more accurate?

His efficiency will come with age and experience.

As for the other rare gifts, Russell has already put them on display, leading a surprising and injury-riddled Brooklyn Nets team to the 2019 NBA Playoffs.

I compare Russell here to Klay Thompson because that is the role he must fulfill during this season’s first four months.

As we noted before, Russell is a shooter-playmaker, while Thompson is more of a shooter-sniper.

Don’t get me wrong: shooter-snipers are valuable, but a shooter-playmaker is more treasured as one of the most valuable commodities in offensive basketball.

Having two of the best shooter-playmakers in the game in Curry and Russell is going to open up the Warriors playbook in dramatic ways.

Plus, when Curry is resting, Kerr has the luxury of replacing him at point with the best complementary guard in the game today.

It is reminiscent of what Houston did with James Harden and Chris Paul the last couple of years, and what the Rockets are doing with Harden and Russell Westbrook this season.

Granted, as a newcomer, Russell will have his chemistry issues that will give Golden State long-timers fits at times.

But if Curry and Draymond Green can be patient with the young All-Star, Russell could have the team playing at a high level upon Thompson’s return.

At that point—in both the 2020 NBA Playoffs and in the future during the 2020-21 season—the Warriors really will be able to reap the benefits of the youngster’s game.

Imagine a lineup of a healthy Thompson, Curry, Russell, Green and either Kevon Looney or Willie Cauley-Stein?

Dare I say it looks as good as the 2015 club that featured a 26-year-old Curry, 24-year-olds Thompson and Green, 22-year-old Harrison Barnes, along with a 31-year-old Andre Iguodala, 30-year-old Andrew Bogut and 29-year-old Shaun Livingston.

Shades of the Future

Two of these prospects are Americans who bypassed college basketball to play in Australia’s National Basketball League: No. 3 prospect LaMelo Ball and No. 6 prospect R.J. Hampton.

Expect that number to grow from seven to perhaps double that in the near future.

If 28 percent of the top prospects are professionals now, I would not be surprised if that number grows to at least 50 percent when the 2022 NBA double-draft comes, when the one-and-done rule is likely eliminated from the NCAA lexicon.

The G League is probably a year away from being a 30-team minor-league system with each organization having its own affiliate. And with the current 15-man rosters, a couple two-way contracts and a half dozen Exhibit 10 deals, NBA squads can hoard as many as 23 players on their North American-based preseason rosters alone, not to mention draft-and-stash rosters on overseas clubs.

There have never been so many six-figure salaries available for so many prospects, nearly double the total from eight years ago when teams fielded 12-man rosters.

It almost makes one wonder why would a five-, four- or three-star athlete illegally accept $50,000 to $100,000 from a college team, when he can make that same salary in the G League in America, or in the NBL in Australia, not to mention China and other European leagues.

The time has never been better—and more profitable—to be a young professional basketball player, evidenced by the 225 rookies entering the NBA in the last two seasons combined (112.5 average), about double the yearly average from a decade ago.

With the double-draft dawn upon us in three years in 2022, I would not be surprised if we see as many as 150 rooks annually entering the League, starting with the 2022-23 season.

That is great news for those parents out there with high school freshmen who are five-, four- and three-star players.

By the time those players turn 18, there is probably a six-, seven- or eight-figure job waiting for them in the NBA, G League or NBL.

We should be used to the mid-October start times by now, but for some reason fantasy basketball always has a way of sneaking up on you.

If you have a points-based draft going on this week and don’t have a clue who to take, here’s a quick top 30 rundown of the healthy players who are going to put up quality and quantity numbers in 2019-20.

The Superstars Tier: The obvious money is on Anthony Davis. The sharp money is on Karl-Anthony Towns. The old money is on Stephen Curry. Nikola Jokic has the upside. Damian Lillard has the sure side.

The Unsteady Superstars Tier: LeBron James can be king, if his age does not show. Kawhi Leonard is supreme, if he can manage his load. Paul George can be an MVP finalist again, if he recovers from shoulder surgeries soon. Joel Embiid can be MVP, if he stays healthy. Kyrie Irving is a top 10 player, if he can play 75 games.