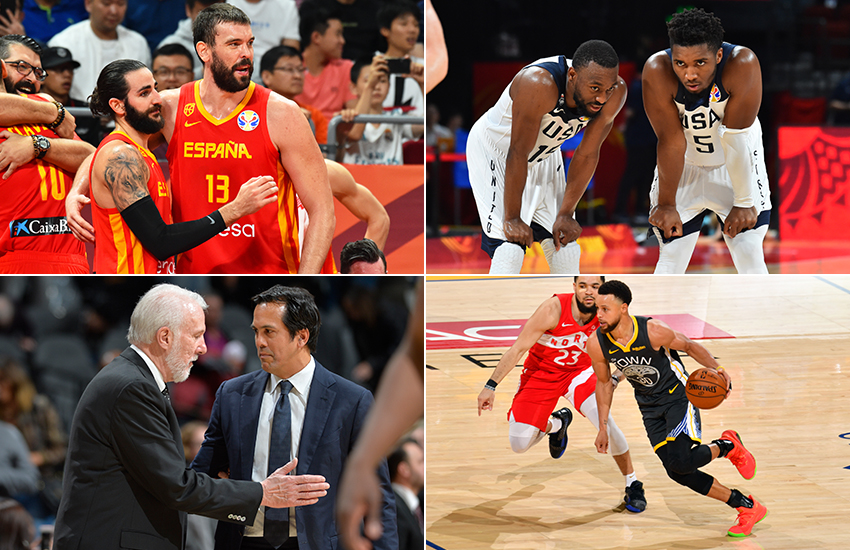 With 10 All-NBA Americans taking a vacay from the 2019 FIBA World Cup—only Kemba Walker went—the China games became the stage for other global greats to dominate on the world stage.

And dominate, they did.

We thought we would take a look at the five international players who owned the globe this summer.

Ricky Rubio, Phoenix Suns: The 17-year-old kid who won silver with Spain at the 2008 Olympics, and then became the 25-year-old man that won bronze with Spain at the 2016 Olympics and now reigns as the 28-year-old who won gold with Spain at the 2019 World Cup. Now that is meta mettle medaling, Dude. Not only does the golden child persevere as a global great, Rubio now exits Beijing as the Tournament MVP after quarterbacking the Spaniards to a 95-75 win in the championship game. And he is only 28 years old. The 28-year-old still has many chapters to write in his NBA bio, not to mention his Olympics diaries to come. In the 2019 World Cup, Rubio averaged 16 points, 5 rebounds and 6 assists in 26 minutes per game, with a .578 true shooting percentage, posting a +96 plus-minus in nine games. The future Hall of Famer definitely looked like he had recovered from the hamstring injury that hampered him last season and postseason with the Utah Jazz. Now that Rubio is a Phoenix Sun, the 6-4, 190-pound point guard looks primed to give youngsters Devin Booker and Deandre Ayton the guidance—and the touches—they need, just as he did with his old-head teammates in Spain (34-year-olds Marc Gasol, Rudy Fernandez, along with 31-year-olds Victor Claver and Sergio Llull).

Marc Gasol, Toronto Raptors: Speaking of Rubio’s old-head teammates in Spain, what an amazing summer it has been for future Hall of Fame center Marc Gasol. After getting traded from Memphis to Toronto February 7, the point center opened up the Raptors offense to the point where they became second only to the Golden State Warriors in assist ratio, after ranking 15th before February 7. Gasol had similar impact on Team Spain, with the 7-1, 255 pounder ranking second only to Rubio in assists, while spearheading an offense that scored 95, 95 and 90 points in the tourney rounds to eliminate Argentina (75 points), Australia (88) and Poland (75). The All-Tournament center averaged 14 points, 6 rebounds, 4 assists in 29 minutes per game, with a .538 true shooting percentage, posting a +109 plus-minus in eight World Cup games.

Luis Scola, free agent: Luis Scola made the world stand at attention when the 39-year-old center became Benjamin Button and schooled defensive center Rudy Gobert for 32 points on 17 shots in the World Cup semi-finals, leading Argentina over France, 80-66. Who can blame Scola if he ran out of gas in the final to Spain? His LeBron-like imitation—fast breaking attacks at 6-8, 240—will forever be remembered by those sitting courtside in awe (former teammate Manu Ginobili, Tony Parker and Kobe Bryant, among others). The All-Tournament center averaged 18 points and 8 rebounds in 30 minutes per game, with a .566 true shooting percentage, posting a +103 plus-minus in eight World Cup games. The future Hall of Famer who thought he may have played his final minutes in China for both the Shanghai Sharks and Argentina this year, now faces the tough decision to play or retire as NBA teams come calling on the former Rocket/Sun/Pacer/Raptor/Net to suit up again.

Bogdan Bogdanovic, Sacramento Kings: All eyes were on Nikola Jokic for this World Cup, but a Serbian teammate—with Jokic’s blessing—upstaged him in a good way, as both point center Jokic and scoring guard Bogdanovic were as efficient as could be. The 6-6, 205-pound Bogdanovic averaged 23 points, 4 assists, 4 rebounds in 28 minutes per game, with a .741 true shooting percentage, posting a +100 plus-minus in eight World Cup games. The All-Tournament wing scored from all over, making 35 of 66 three-point attempts (53 percent), 25 of 42 two-point attempts (60 percent) and  28 of 35 free throw attempts (80 percent). Meanwhile, Jokic was equally efficient in his point center role, averaging 12 points, 8 rebounds and 5 assists in 23 minutes per game, with a .754 true shooting percentage, while posting a +101 plus-minus in eight games. If Serbia had not run into such a hot Argentina team in the quarterfinals—with both Facundo Campazzo and Scola erupting for 48 points on 25 shots in a 97-89 upset loss—the 27-year-old Bogdanovic may have earned his third global medal, after picking up silvers with Serbia while playing in the 2016 Olympics and 2014 World Cup. If Sacramento prospects De’Aaron Fox and Marvin Bagley, who both spent time with USA Basketball this summer, did not recognize Bogdanovic’s potential before (-28 plus-minus in 302 minutes together in 2018-19), we are hopeful the Kings teammates are aware of his abilities now.

Patty Mills, San Antonio Spurs: In a foreshadowing of things to come for USA Basketball, Mills dismantled Team USA in an exhibition game with a 30-point performance in front of a record 52,079 fans in Melbourne, Australia. Mills scored Australia’s final 10 points to lead his country from a 10-point deficit to a 98-94 victory. It was the Americans’ first loss in international play since 2006. In eight World Cup games this summer, Mills averaged 23 points, 4 assists, in 34 minutes per game, with a .641 true shooting percentage, posting a +57 plus-minus. When Mills returns to the Spurs, the guard undoubtedly will return to his sixth man role as a leader of the second unit, a la Manu Ginobili, who as fate would have it, also led the upset of a professional USA Basketball squad back at the 2002 World Cup. And, yes, Spurs head coach Gregg Popovich was there for that loss too, as a USA assistant to head coach Larry Brown.

Who Does USA Basketball Bring Back From The Daydream Team?

Kemba Walker and Donovan Mitchell were the only USA players to play well throughout the 2019 World Cup.

Pop had so little depth to work with that he even ditched his three centers in the quarterfinals—Turner, Lopez and Plumlee—in the game against France, only to see Rudy Gobert offensively dominate USA’s strange small-ball lineups.

I never thought I would see the day where Harrison Barnes and Khris Middleton played center on a World Cup USA Basketball team.

I blame USA Basketball for concocting a ridiculous 25,000-mile, eight-city, tri-continental schedule that both scared off 10 All-NBA Americans (all but Kemba Walker) and 31 of the original 35 players from the original USA roster.

Hopefully next time, when USA Basketball plays at the 2020 Olympics in Tokyo, they don’t schedule two weeks of exhibitions in Brazil before the games begin.

That said, there are only two players I automatically bring back for next year’s Olympics: Walker and Mitchell.

Everyone else makes my 20-man USA Basketball 2020 roster, but they do not automatically make the 12-man team.

I need me the two best scorer-playmakers in the game in James Harden and Stephen Curry. Curry is already on the record for being part of the 202 Olympic squad, barring injury.

I need me two legends of the game in LeBron James and Kevin Durant.

I need to make my legends happy so I get their teammates Anthony Davis and Kyrie Irving on the list.

And I need me some lockdown defenders so I dial L.A. and call up Kawhi Leonard and Paul George.

Those eight, with Walker, Mitchell and two 2019 holdovers should get the job done.

And if I’m Pop, and if any of these guys bail on me again, then I get my assistant coach Tim Duncan to take their place and come back for one last hurrah.

Every column I write somehow has to work in a Duncan & Pop, Butch Cassidy & Sundance type of ending to this story.

Put Me In, Coach

It seems like everyone with an NBA résumé nowadays is making the Naismith Memorial Basketball Hall of Fame, best evidenced by the 111 entrants that have entered the hallowed hall in this decade alone, comprised mostly of league administrators, owners, general managers, along with men’s and women’s college coaches, international players and 20th Century teams.

Lost in the shuffle is NBA head coaches.

I actually was not aware of this fact until Los Angeles Clippers head coach Doc Rivers and Miami Heat head coach Erik Spoelstra talked about the discrepancy on Adrian Wojnarowski’s “The Woj Pod” podcast last week.

But as of now, after referencing Basketball-Reference, I can confirm only 16 men who coached a majority of their career in the NBA are now in the Basketball Hall of Fame.

When you consider there are 105 coaches in the Hall, this is quite the discrepancy.

Even women’s college basketball coaches, who only recently received their due recognition, have 15 coaches in the Hall of Fame.

There used to be a stipulation that said a head coach had to be retired to be inducted, but that rule was scrapped long ago, paving the way for active college head coaches like Bill Self, Tom Izzo and John Calipari to enter the Hall of Fame as active college coaches in the last five years alone.

Yet, no active NBA head coaches have been nominated during this time.

Granted, San Antonio head coach Gregg Popovic asked that his name not be considered until his No. 1 player, Spur great Tim Duncan, also was eligible, which happens in Summer 2020.

But that is no preclusion why other NBA championship coaches could not be considered, like Steve Kerr, Spoelstra, Rivers, Rick Carlisle, among others.

There is no reason why they cannot green-light the candidacy of past coaching greats like the late Rick Adelman, Rudy Tomjanovich and George Karl as well.

It is a crime when the Hall of Fame committee is inducting nearly a dozen new members every year, yet continue to ignore NBA head coaches who have suited up for more actual games than anyone else going into the Hall.

Go figure that one.

Shooter-snipers are valuable in today’s NBA, but there is nobody more intrinsic to offensive efficiency than the elite shooter-playmaker.

By spacing the floor as three-point threats, a shooter-playmaker at times creates gravity within the offense, similar to a shooter-sniper.

By shooting efficiently from all over the court, a shooter-playmaker becomes perpetual scoring threat from deep perimeter to rim attacks, which lead to free throws, of course.

By playmaking for others, a shooter-playmaker quite frankly is a deadly force at all times, whether he is creating his own great shot or creating great shots for others.

But it is even more imperative to have at least one great shooter-playmaker on the floor if you want to win championships in today’s NBA. They not only create gravity with their propensity to shoot, they also create 3s, 2s and 1s by being a perpetual triple threat with the ball.