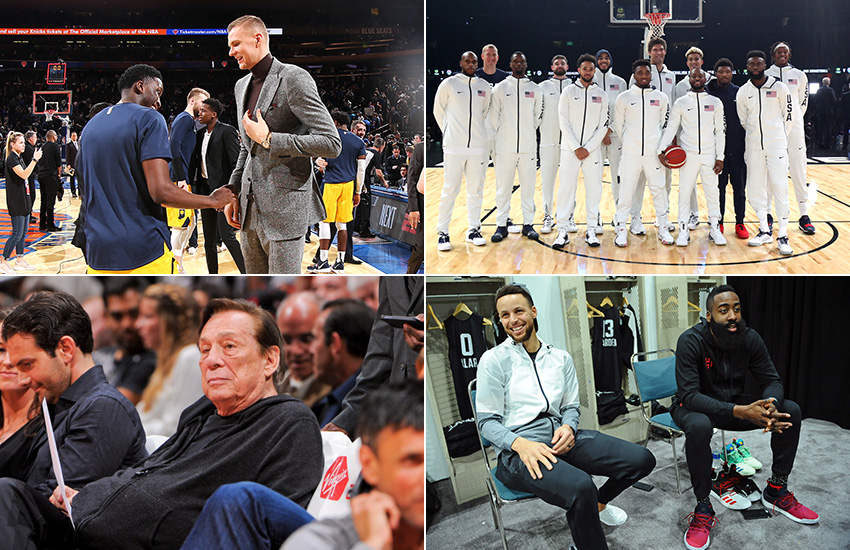 Fallen stars come in many forms in the NBA.

First off, you have your retiring stars: players who played at high levels in recent years who are no longer on NBA rosters (Dirk Nowitzki, Dwyane Wade, Tony Parker, Darren Collison, among others).

Then you have your out-of-sight stars: players, recently taken out of action with injuries, who are likely to return in the 2020-21 season, but will miss most—if not all—of the current 2019-20 season (Kevin Durant, Klay Thompson, DeMarcus Cousins and John Wall).

Finally, there are the comeback stars: players who have hopes of returning to the NBA skyline after missing most of last season due to various injuries, for the most part.

We list the top 10 comeback stars here with summer status updates on each one.

Victor Oladipo, Indiana Pacers shooting guard: Some think October. Some say November. Some are non-committal. Oladipo won’t talk about his right knee injury or his pending return. The main thing Pacers management is concerned with is not pushing their 2018 and 2019 All-Star to rush back to his team after tearing his quad tendon last January, especially with guards Malcolm Brogdon and Jeremy Lamb on roster now to cover for the 27-year-old’s absence.

Kevin Love, Cleveland Cavaliers power forward: The five-time All-Star has not cleared the 2000-minute standard for three seasons now, but that did not stop coaches from naming him to the All-Star team as recently as 2018, thanks in part to the Cavs’ five-straight-Finals showing. Now, with Love seemingly back to full strength and health after his longest offseason since Minnesota, look for Love to return to his 18-point, 11-rebound career averages in Cleveland, at the very least.

Dejounte Murray, San Antonio Spurs point guard: The 23-year-old prospect whose career line compares favorably with Kawhi Leonard at similar age is 100 percent again. Remember, the 6-5 point guard who suffered a torn ACL last preseason was a 2017-18 All-Defense second teamer as a 21 year old, joining Tim Duncan, Anthony Davis and Kobe Bryant as the only four players to do so at such a young age.

Jusuf Nurkic, Portland Trail Blazers center: Trail Blazers GM Neil Olshey says his do-everything center is “on or ahead of schedule,” though he does not give a timeline when the 25-year-old Blazer is expected to return. Remember, the 7-0, 275-pound Nurkic was a most-improved candidate last season whose 16-point, 10-rebound averages only begin to reflect his all-around importance to this team when it comes to doing the big and little things in team basketball.

Goran Dragic, Miami Heat point guard: Dragic was almost traded to Dallas, but they were not going to unload their 2018 All-Star without something good in return, which is why the 6-3, 190 pounder remains in Miami to this day. Only time will tell if the 2018 All-Star is over the knee problems that caused the 33 year old to miss 46 games in 2018-19.

Isaiah Thomas, Washington Wizards point guard: The 2016 and 2017 NBA All-Star has not been healthy for two years now, missing 120 games in both the 2017-18 and 2018-19 seasons combined. That said, John Wall’s Washington replacement at point guard is telling everyone who will listen this summer that he is 100 percent again after suffering a serious hip injuring during the 2017 NBA Playoffs. The 30 year old listed at 5-9, 185 pounds says he now weighs a healthy 168.

Pau Gasol, Portland Trail Blazers center: Gasol was the Spurs’ starting center on a prospective playoff team before the six-time All-Star started suffering foot problems last November. Now the 39 year old is expected to perform tag-team center duty with Hassan Whiteside until Nurkic comes back, and who knows how many minutes he will also log as a stretch 4 when Nurkic returns.

Dwight Howard, free agent center: Even though NBA teams play hot potato with Howard on an annual basis (four teams in the last four years), the eight-time All-Star is only 33 years old and did average 16 points and 12 rebounds the past two years in 90 games combined.

Carmelo Anthony, free agent power forward: The 10-time All-Star who played in the All-Star Game as recently as 2017 says he has some more bullets in the gun that averages 24 points in a 16-year NBA career. The 35-year-old Melo played 10 games with the Houston Rockets before they waived him last season and he has not found an NBA home since, though rumors still mill about that his comeback is imminent.

With the exceptions of the 2004 Olympics and 2006 World Cup squads, the USA Basketball teams assembled from 1992 through 2016 have been head-and-shoulders above the rest of the global competition.

Those 1992-through-2002 and 2008-through-2016 teams were comprised of the best in American basketball, with the USA Basketball 12-man rosters being loaded with active All-Stars.

That was not the case with the 2004 USA Basketball Olympics’ bronze-medal squad, the first American team to disappoint on the worldwide stage since the Olympics went pro 27 years ago.

That 2004 USA squad only had two NBA All-Stars on its 12-man roster, Tim Duncan and Allen Iverson (seven others would become future All-Stars, but none at this point) and one 2003-04 All-NBA player (Duncan).

It is totally reminiscent of the 2019 USA squad that also features only two 2019 NBA All-Stars (Kemba Walker and Khris Middelton) and one 2018-19 All-NBA player (Walker).

Judging from past results, it seems like a recipe for disaster again, if finishing third in the upcoming 2019 World Cup still qualifies as disaster.

For the life of me, I do not understand why USA Basketball made its players commit to a month-and-a-half travel schedule that culminates after a month of globetrotting with a two-week World Cup in China.

I mean, who wants to make but four trips to four cities on two continents before they even fly to Shanghai?

Did they really need that much worldwide travel to train for the World Cup?

Is this a marketing trip or a competition to win gold?

Why couldn’t USA Basketball train in Las Vegas and then fly to China?

It is understandable why injured All-NBA players—like Paul George and Kevin Durant—cannot make the journey because they are recovering from surgeries.

Did we not learn our lesson in 2004 when we sent a team of college-aged prospects to a world competition?

Remember, that was when LeBron, Dwyane Wade and Carmelo Anthony were just NBA rookies, before they had become the All-Stars, All-NBA players and legends we know today.

If that is not bad enough, I do not even think the 2019 USA team is as good as that 2004 USA squad that disappointed and earned the Olympics bronze medal from a third-place finish.

When I run my Efficient Plus-Minus numbers on each team’s previous NBA season, the 2004 USA team is so much better than the 13 players currently on roster for the 2019 Daydream Team (see box below).

That is not to say the current American squad cannot compete with the world because I believe it can. I believe USA is the favorite, with Serbia a competitive challenger, following silver-medal finishes in both the 2016 Olympics and 2014 World Cup.

This 2019 USA team is a far cry from those Olympics and World Cup squads, not to mention the Dream Teams of the 1990s.

For further comparisons on past versus present, check out how the 2019 USA Basketball squad does not even come close to the 2004 USA team, using Efficient Plus-Minus from the previous NBA season as the key barometer.

Ramona Shelburne has a thriller of an NBA story to tell on ESPN’s 30 For 30 Podcast series.

The five-part, 230-minute series is, without a doubt, the best podcast program I have heard in 2019 thus far.

Now that I have finished listening to the 5-part, 230-minute podcast released today, I can say—without a doubt—that @ramonashelburne @30for30 miniseries was the best podcast program I have heard in 2019 thus far. Congrats Ramona, 30 For 30 & ESPN. https://t.co/i3qcfq1rC0 https://t.co/VtJL0DpWVW

It is so good that I cannot wait to see who lands the movie rights, and from there, I will lay in wait for the movie to come out.

Nobody comes out smelling nicer from The Sterling Affairs following Donald Sterling’s odious behavior than his wife Shelly Sterling, who basically outsmarted her husband to finalize the sale of his former team.

But a close second is NBA Commissioner Adam Silver, who forced the team sale when, in only his fourth month on the job, he called for the lifetime ban of Sterling in April 2014 after recordings captured the owner’s racist rants.

The podcast makes one wonder how The Donald was able to keep an NBA team for as long as he had during David Stern’s 30-year run as league commissioner. Stern, as the podcast points out, was defensive of the owners’ behavior in previous incidents, while Silver, in one of his first acts as commissioner, sided with the players in this employee-versus-employer scenario.

In retrospect, five years later, both sides benefited from Silver’s decision in more ways than one.

Silver became the most respected leader in the players’ eyes by taking that stand against the owners who pay his salary.

Meanwhile, the owners could respect the decision because it ultimately made them all richer.

Sterling’s Los Angeles Clippers franchise ultimately sold to Microsoft CEO Steve Ballmer for $2 billion, after Forbes had previously estimated the franchise to be worth only $575 million in January 2014.

The escalation in franchise value consequently doubled or tripled most NBA franchise valuations, thus assuring dissenting owners that new Commish Silver indeed had their best interests at heart. Men like Michael Jordan, who had a majority ownership in the Charlotte Hornets, became billionaires overnight.

Remember, all this came on the heels of the 2011 NBA lockout that forced owners and players to restructure their collective bargaining agreement for the good of the game.

Then, nearly two-and-a-half years later, with this Clippers-created value escalation, business has never been better as a result.

The best measuring stick of this booming market is the annual escalation of the NBA salary cap, which is basically determined by a formula that splits league basketball-related income 50/50 essentially with owners and players.

So a rise in salary-cap figures means business is good for everyone.

To best illustrate how the Clippers sale benefited the bottom line for all, know this: The NBA salary cap from the 2007-08 season through the 2013-14 seasons rose only $3 million—from $55.6 million to $58.7 million, a 5 percent increase over that six-year span

For contrast, check out the yearly rise from the season before the lockout ($58.0 million in the 2010-11 season) to the day of the Clippers’ sale to Ballmer ($58.7 million following the 2013-14 season) to each year following that monumental change in the NBA business landscape (see box below).

Ever since the forced Clippers sale in April 2014, NBA business has never been better, with the salary cap rising $50 million alone over this current six-year span, including this 2019-20 season. That is a 46-percent increase, my friend.

Who could have predicted a lifetime ban of one owner would turn into a deal-of-a-lifetime for the other 29 owners?

Now that all the big-money free agents have signed their 2019 deals, it is time we re-establish NBA pay grades for top players for future edification.

Players falling under this parameter for 2019-20 include Stephen Curry, Chris Paul, Russell Westbrook, John Wall, James Harden and Kevin Durant, according to Spotrac.

In similar fashion, 33 players are making at least $27.285 million (25 percent of the league’s $109.14 million cap), which means you should be a strong All-Star candidate to be worthy of such a junior-max deal.