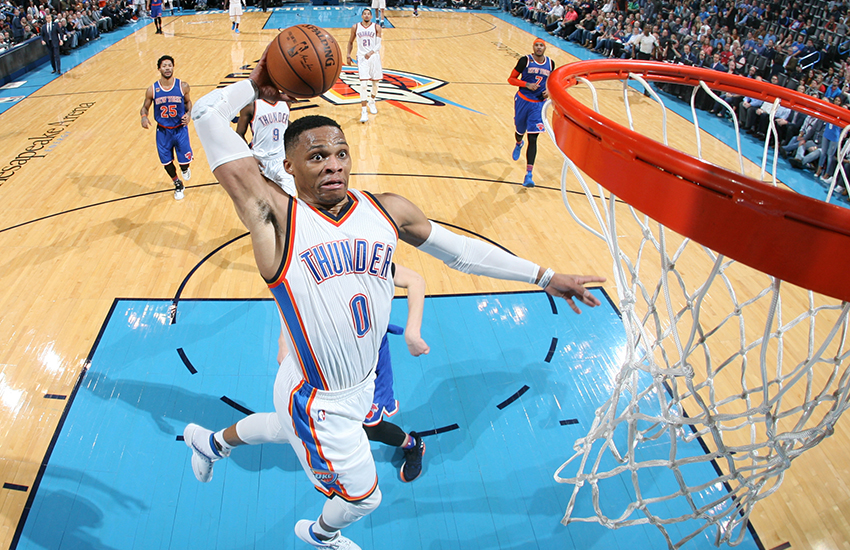 Even though the Oklahoma City Thunder were dispatched in five games by the Houston Rockets in this year’s playoffs, Russell Westbrook still had the greatest individual regular season of any player in modern history. If that sounds a bit hyperbolic, remember that the last time a player averaged a triple-double for a full 82 games, a vast majority of us who call ourselves basketball fans weren’t even born. It’s also worth remembering that not too long ago, most thought LeBron James, the most all-around gifted player to ever play, had the best chance of anyone to duplicate what the Big O did in 1961-62.

Robertson averaged 30.3 points, 10.4 rebounds and 10.6 assists in his remarkable season, and Westbrook’s numbers were almost identical at 31.6 points, 10.7 rebounds and 10.4 assists. The only difference is that while Robertson finished third in MVP voting behind Bill Russell and Wilt Chamberlain, chances are that Westbrook will beat out James Harden—his only real competitor—for this year’s MVP.

Westbrook’s ethereal season was one many predicted. The ball would be in his hands and triple-doubles would be a certain outcome, but few saw a season-long one, especially given the lack of capable scorers converting Westbrook’s passes into dimes.

Westbrook was equal parts dominance and indomitable will. With Kevin Durant bolting to join the Golden State Warriors last summer, Russ seemed hell bent on proving to the world that he wasn’t just a supporting player or KD’s sidekick, but a bonafide superstar and one-man gang in the mold of Michael Jordan, Kobe Bryant or Allen Iverson. At some point in each of those player’s careers, they were the sole reasons for the success of their teams in the regular season, but could only do so much individually in the playoffs where coaching strategy, adjustments and quality of supporting talent matter so much more.

Still, in five games against the Rockets, Westbrook proved that what he did during the first 81 regular-season games was no fluke as he put up triple-doubles in the last three contests of the series, but it wasn’t enough to help the Thunder advance past the first round. Now, it’s all about the future in Oklahoma City and how the team plans to build around their star and lessen the load he had to carry in 2016-17.

When the Thunder collapsed, and blew a 3-1 lead against the Golden State Warriors in the Western Conference Finals last year, a large part of the talk was the team needed a third player to take some of the pressure off Durant and Westbrook. With Serge Ibaka seeming to regress both on offense and defense, Sam Presti sent him to the Orlando Magic for Victor Oladipo and the rights to rookie Domantis Sabonis. Unfortunately, 10 days later, on July 4, Kevin Durant announced his decision to join the team that had just beaten his old one, prompting Westbrook to announce his own “independence” by posting a three-tiered tray of holiday cupcakes, an obvious dig at his former teammate.

Moving forward, while Oladipo obviously wasn’t expected to replace what Kevin Durant brought to the Thunder, he certainly should have been able to step up and fulfill a larger role in the offense. In his three previous seasons, the 24-year-old had proven to be a capable, albeit inefficient, scorer. The hope was he’d grow in his fourth year and improve with more talent surrounding him. But that was never the case as he put up the same, uninspiring numbers (15.9 PPG on 44 percent shooting) he did when he was in Orlando. In the postseason, Oladipo was virtually a non-factor as he regressed to a paltry 10.8 points points on 34 percent shooting from the field and 24 percent from beyond the arc. When you consider that his new deal kicks in that will pay him $21 million annually over the next four seasons, the pressure to perform at the level of his salary will be much higher.

Oladipo never seemed to fully take advantage of his newfound opportunity as a second option to Westbrook, and Presti will have the difficult decision of deciding if he truly is a part of the team’s future going forward, and if not, ascertain what he can get for him in any potential trade. The prospect of moving Oladipo after just one season may be a little hasty, but 2017-18 will be his fifth year in the NBA and unfortunately, it appears that he may have peaked as a player, which doesn’t bode well for the Thunder now, or in the future.

Before breaking his forearm in late January, Kanter was a legitimate candidate for the Sixth Man of the Year award. Up to that point, he was averaging 14.4 points and 6.7 rebounds in 22 minutes off the bench. Never a stout defender, Kanter mitigates his shortcoming with his solid offensive play, but in the microscope of the playoffs—and the constant pressure of Houston’s pick-and-rolls, James Harden, rolling bigs and a bevy of shooters to close out on—put a bullseye on Kanter. He even seemed to lose the confidence of head coach Billy Donovan, who pulled him after multiple defensive lapses in Game 1, seen telling assistant Mo Cheeks what lip readers surmise as: “Can’t play Kanter.”

The Turkish big man would play sparingly over the next four games of the series, barely making an impact, possibly leaving his future in Oklahoma City in question as well. Two summers ago, the Thunder matched the four-year, $70 million offer sheet that Kanter signed with the Portland Trail Blazers—a move that now seems dubious at best. With Sabonis being a still unproven, yet promising rookie with a high ceiling, and veteran big man Taj Gibson who values loyalty above all else and could be convinced to stick around, like Oladipo, Kanter could be used in a potential trade scenario to get quality reinforcements around Westbrook.

Is Adams the Answer?

Steven Adams poses another dilemma for Presti and the Thunder. On one hand, he’s the team’s best rebounder not named Westbrook, even though his average of 7.7 boards in the regular season and 6.8 rebounds in the postseason, leaves a lot to be desired. Still, he’s a tough competitor and durable, starting in 80 of the team’s 82 games. However, the Thunder need players who can not only score down low consistently, but also stretch the defense when and where appropriate. Adams can run the floor, roll to the basket and has good hands, but he’s no Hakeem Olajuwon in the post and lacks range. Like Oladipo, Adams seems to have peaked in terms of ability and the chances of him being any more than what he is now are unlikely.

The big Kiwi also signed a four-year, $100 million extension that kicks in next year and will pay him $22.4 million during OKC’s 2017-18 campaign. If you add that to the $17.8 million that Kanter will make, that’s roughly $40 million annually for two incomplete big men who specialize on just one side of the ball. It’s truly hard to ascertain which player may have more value to the Thunder or another team, and there’s a good chance that even with the salary cap expected to go up as the NBA’s new TV deal kicks in, OKC could still have a very difficult time unloading both players if that’s the direction they choose to go.

What’s not in question is the fact that Russell Westbrook is happy in Oklahoma City and seems to have every intention on remaining a part of the Thunder. Able to sign a new contract extension this summer—which could make him the League’s highest paid player with a total compensation of $220 million over five years—after just signing one last summer, Westbrook stated in his exit interview that Oklahoma City is where he’d like to be.

“Everybody knows that I like Oklahoma City and I love being here and I love everybody here,” he said. “But I haven’t even thought about [the future]. Obviously, Oklahoma City is a place that I want to be.”

Of course, this is April and July is still some time away. A lot can change in the span of a few months, even a year. And as we’ve seen before, players certainly have an ability to say one thing and then do the opposite. This is not to suggest that Westbrook, who always gives it to you straight, is misleading the Thunder in any way by saying he wants to stick around. But after the season he just had, inking a deal that would keep him in town beyond next season would certainly bring relief to a fan base that’s already been jilted by a superstar once.

The real pressure, however, is on Sam Presti. He has a roster that is clearly flawed and has glaring holes that need to be filled. And with only $11 million in cap space, it will be almost impossible to lure anyone in the upcoming free agency class to Oklahoma City. And for a small-market team that traded away James Harden to avoid paying the luxury tax, Presti appears to be painted into a corner with his back completely against the wall.

He has to convince his superstar to stay, while at the same time adding much needed pieces that will make that decision an easier one for Westbrook. It won’t be an easy summer for Presti, and if he’s able to do nothing except stand pat, then next year will be wrought with anxiety for the franchise and the fan base because Westbrook has a player option that he could very well exercise, making him an unrestricted free agent and able to go to the team of his choice.

If that’s the scenario that Presti is faced with, then the Thunder would have to explore the possibility of trading Westbrook just so they aren’t left empty handed if he were to leave. But that’s a conversation for another day.