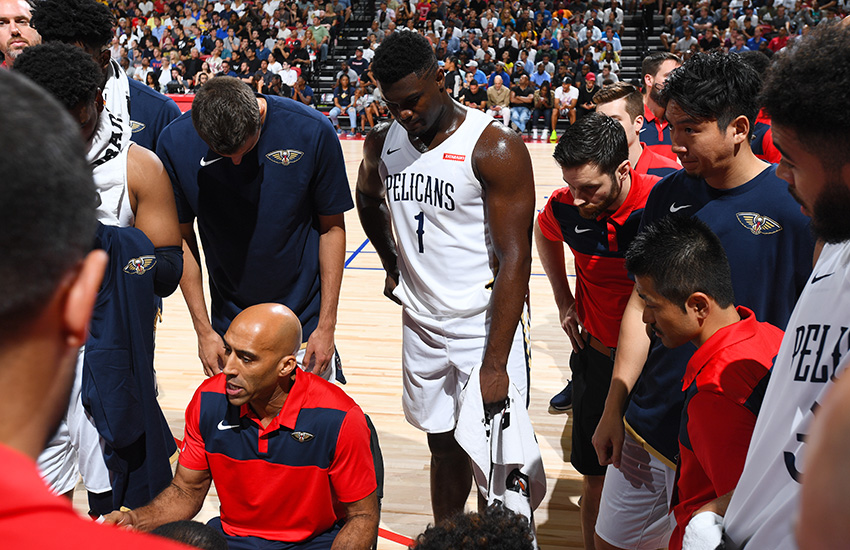 Lost in a storm of outside discussion on the moral implications of an NBA superstar violently forcing his own exodus, lies an actual basketball team.

The chaos came and destroyed the Pelicans’ season and threatened its long-term viability, but the birds hunkered down and through the anarchy of both external and internal pressure, have every reason to enter this season with an air of optimism.

But before we can get there, a few words summing up the windy road that led New Orleans here last season.

Seven years ago, Anthony Davis was supposed to be a savior. Davis was the consensus No. 1 pick of the 2012 NBA Draft, a 6-10 wonder who had the size of a big but the skills of a guard, a one-and-done sensation coming off an all-time freshman season and a National Championship at Kentucky who, with zero games of NBA experience, was good enough to suit up with a team no less than 8-10 future Hall of Famers in London to represent the nation in the U.S. Olympics. Davis was supposed to be a solution for a franchise that has to date been almost wholly irrelevant in the grand scheme, and with the help of the CBA, he was supposed to be a fixture for years to come in the Bayou. He was meant to replace the former beacon, Chris Paul, who was off to that other Los Angeles team. Davis was every bit the generational talent he was billed as, finding his onto the MVP ballot at just 21 years of age.

In Davis’ seven seasons in New Orleans, the Pelicans tried their best to put a contender around him, but given the small market, playing in an era with two historic great teams (Miami Heat and Golden State Warriors) and some unfortunate injury luck, they never quite met that mark.

In comparison to the Toronto Raptors squads around Chris Bosh, LeBron’s first go-around in Cleveland Cavaliers squads and the bevy of misfires the Minnesota Timberwolves surrounded young Kevin Garnett with, the Pelicans didn’t do a bad job, they just didn’t nail the situation to an extent where Davis was totally content. And even if they had, perhaps Davis leaves anyway (see Kawhi Leonard and the Toronto Raptors this past year).

You know what comes next. Despite showing some promise—winning a series and falling admirably in an unwinnable matchup against eventual champs, Davis, via Rich Paul and Klutch Sports, made a power play and crippled the Pelicans hopes of ever getting it right by publicly declining a contract extension with two years left on his Pelicans contract. This left the Pelicans with little choice but to seek the best deal they can get for one of the top players in the game—except Davis left them with a short list of teams that New Orleans could strongly deal with since he only had a short list of teams—with the Lakers sitting atop—he would considering re-signing with. When negotiations broke down, the Los Angeles Lakers and Klutch Sports tried to flex their collective strength and force New Orleans into submission but the Pelicans held fast and brought in a new negotiator, David Griffin.

Griffin, the former general manager of the Cavaliers brought in a championship pedigree. Respected around the League for his tangible contributions to a team that made the Finals three straight years under his watch, the Pelicans had an executive that they believed could not only survive but thrive in the immediately unforgiving condition of the franchise.

Griffin did his due diligence on retaining Davis, but the ship had already sailed and running contrary to the idea that winning was the most important factor for Davis, it had become clear he was dead set on joining the Lakers.

With the Lottery gods shining upon them, the Pelicans did manage to net the No. 1 pick (Zion Williamson), which made losing Davis more palatable, so Griffin took the only route available to him, resulting in a fast and on-the-fly re-tool.

He dealt Davis to the Lakers and came away with a monster haul, despite holding little leverage. The deal reset the bar on what fair draft pick compensation looked like when sending out a superstar, as we’d come to see later in the summer.

The Pelicans cleaned the Lakers out of picks and youth, acquiring former first-round picks Lonzo Ball, Brandon Ingram, Josh Hart, the rights to No. 4 pick in the 2019 draft, two futures and the rights to swap another down the line. They turned number 4 (De’Andre Hunter) into numbers 8 (Jaxson Hayes) and 17 (Nickeil Alexander-Walker), both of whom shone in Summer League.

Then, with the draft behind him, Griffin turned his gaze to free agency. Also leaving with Davis: Solomon Hill, Julius Randle, Elfrid Payton, Stanley Johnson, Christian Wood and Cheick Diallo. Coming in with Williamson: Derrick Favors, JJ Redick and Nicolò Melli. (Melli was mentioned as the best international player outside of the NBA in last year’s NBA executive survey.)

Will the re-tool keep the Pelicans in playoff contention in a tough Western Conference, despite losing one of the seven best players in the NBA this offseason?

Currently, Draft Kings has the Pelicans over/under at 38.5 wins this coming season. It’s the 11th highest mark of Western Conference teams and doesn’t bode well for New Orleans fans hoping to avoid another year in the lottery.

The Pelicans are tough to project, their rotation is about to be peppered with young players and if they are going to be competitive in a very tough Western Conference, they’ll need a large amount of growth from one of their newly acquired pieces—most likely, Brandon Ingram.

The expectations for Williamson are astronomical, perhaps even higher than they were for Davis seven years earlier. If he’s anywhere near the player pundits believe him to be, they’re in good hands.

The veteran additions of Favors and Redick should help provide some stability, so the Pelicans have the makings of a solid core on day one, but who is going to be the star that pushes them over the top in a star driven league?

Can Jrue Holiday be an MVP candidate?

Griffin would tell you that this is Holiday’s team. Recently on the Full 48 Podcast, with Howard Beck, Griffin had high words of praise for Holiday, stating the following:

“He’s a stone cold killer for one and he’s a two-way player who can be literally impossible on both sides of the court for anyone to deal with. I looked at Jrue very much in the way that I might’ve looked at Steve Nash. Steve was never thought of as being an MVP candidate, he didn’t enter that year an MVP candidate. People looked at Steve and they said, ‘God, they really overpaid Steve Nash.’ We looked at it in terms of building something that fit around him because he was a winner! All Steve wanted to do was win basketball games and he was willing to sacrifice whatever it took—that’s who Jrue is.”

Holiday is already one of, if not the best perimeter defender in the NBA. If he has another level offensively within his grasp and validates the kind address of his new executive here, it’d be tough to see the Pelicans not exceeding expectations.

Will the Pelicans be the best League Pass team regardless?

Williamson is a phenom. He is the most celebrated prospect since LeBron James and he’s a mammoth of a man with rocket boots for legs. Viewers are going to flock to their televisions and tablets to see this man dunk, whether it’s in a 20-point loss or a 20-point win.

Hayes and Alexander-Walker put on a show at Summer League and it more than fair to posit both are going to excite viewers. Hayes with his rim running and shot blocking, Alexander-Walker with his all-around game and driving acumen.

Then, you have three players Lakers fans died for on the mean streets on the internet. There was belief in the purple and gold ranks that Ingram was going to be a superstar, that Ball was going to be one of the best two-way players at the position.

Add into the mix a blue collar core that Pelicans fans saw grind it out despite terrible circumstances last season and you have a potent and exciting mix of players and personalities coming together in New Orleans.