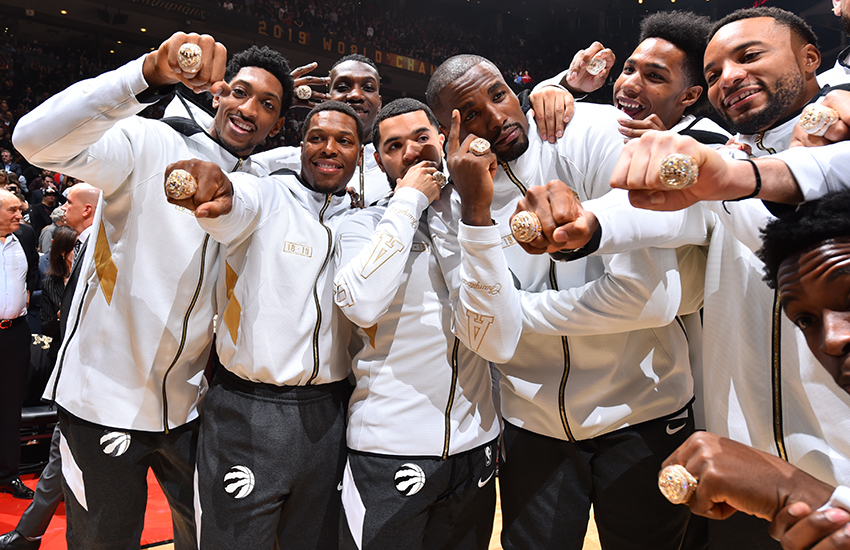 The Toronto Raptors began their 25th season by first celebrating their 24th: A season that will forever be cherished as the one where the Raptors became NBA Champions on June 13, 2019. After winning the first championship, the Raptors—minus a few key members of said championship squad—were rewarded with the honor of kicking off the 2019-20 NBA season in a home opener against the New Orleans Pelicans, but first there were championship rings to be presented and a banner to be unveiled.

A little over four months since the night the Raptors defeated the Golden State Warriors in Game 6 on the road in Oakland and the celebration still felt fresh in the arena in Toronto. For fans in attendance at Scotiabank Arena on Tuesday night, this was an opportunity to shower their team with praise and appreciation on its home floor for the first time since hoisting the trophy. Well before the 8 p.m. tip-off time for the game against the Pelicans, seats were full as fans waited for the chance to relive the the team’s championship run. As the arena went dark and the championship trophy was displayed at center court, glimmering, gold and beautiful, equally beautiful images began flashing on the court below and screen above as highlights from a magical postseason run played out and cheers from the crowd in the clips on screen melded with those live in the area to create a deafening, multi-dimensional roar.

“It’s crazy, a lot of emotions going on, seeing what we accomplished,” Pascal Siakam said of the ceremony and the night. “I’m happy the fans were all together, one last celebration. It’s definitely something we’ll never forget.”

After the quick trip down memory lane, it was time for the rings to be presented. Beginning with Raptors president Masai Ujiri, who triumphantly pumped his fists into the air, joy expressed upon his face as the arena loudly chanted MVP for him, through all of the front office, coaching and support staff, the crowd was ready to celebrate everyone involved. This included a raucous cheer for Alex McKechnie, the Raptors’ director of sports science and overseer of last season’s load management. There was another booming reception for head coach Nick Nurse, and then, for the players, this was the fun part. Along with the parade back in June, days after winning the championship, this was one more opportunity to revel in the moment, a rare reprieve from the nonstop grind of the NBA season, not reflecting on the work it took to get here, nor working to be ready for what was to come. There were brief dance interludes from Norman Powell and Serge Ibaka, a true champion’s eruption for NBA Finals hero Fred VanVleet, a perma-grin from Siakam, as well as appearances from former Raptors Eric Moreland and Jodie Meeks who were in the building to receive their rings.

Receiving his ring last, of course, was point guard Kyle Lowry. After 12 years in the League and six spent in Toronto, Lowry is the bridge between those Raptors teams that painstakingly fell short of this moment, and the one that will go through this NBA season as defending champions. It was Lowry who had a hand in the design of the rings, working with MLSE and Raptors management, giving input on behalf of the players and it was also Lowry who addressed the crowd, mentioning current and former teammates, thanking the fans for their support and then beginning the countdown to the banner being unveiled.

“It meant the world for me to be able to address the crowd,” Lowry said after the game, “[To] speak for everyone that’s put the work in and the time in, blood sweat and tear equity into the organization.”

After 24 seasons of basketball, Toronto’s championship banner was raised to the rafters where it will always remain. After nearly an hour of a packed arena showing its appreciation, it was time to officially kick off the 2019-20 NBA campaign in Toronto. Though the Raptors got off to a slow start and trailed 13-4 early, despite the Pelicans being without first overall pick Zion Williamson (who had surgery for a torn meniscus a day earlier), the defending champions recorded a 130-122 victory in overtime in the first game of the season.

Playing a basketball game after such an emotional presentation is an odd thing. It’s weird to be in an arena and have the biggest focus of the night be something that takes place before the ball even goes up into the air. With New Orleans free from any emotional hangover, the Raptors needed to take a collective breath. When they did shift gears from pregame ring ceremony to NBA regular season game being played, they were led by Siakam and VanVleet, who each finished with spectacular games.

Siakam, who won the NBA’s Most Improved Player award last season and is days removed from signing a four-year, max contract extension with Toronto, showed why the Raptors are all in as he finished with 34 points, 18 rebounds, five assists and a blocked shot before fouling out in 38 minutes. “I’m capable of scoring and scoring different ways, so I know what they expect of me,” said Siakam. “I’m going to continue to work hard and make sure I do my job and continue to help the team win.”

VanVleet who started the season as a member of the starting backcourt alongside Lowry, also finished with 34 points, a new career-high. He shot 12-for-18 from the floor, including 5-for-7 from beyond the arc, while adding five rebounds and seven assists. The two are now tied for third place in franchise history for points scored on opening night, trailing just DeMar DeRozan (40) and Vince Carter (39). “I’m so happy for those guys to go out there and perform like that tonight,” Lowry said. “We will see them grow all year. We’ll continue to see them flourish.”

With Kawhi Leonard now in a Clippers uniform this season, there are points that will need to be scored in Toronto. Tuesday’s game is just the first of 82, but the VanVleet/Siakam duo looked convincing and also extremely fun. Lowry had a solid effort in the victory as well, finishing with 22 points, five rebounds, six assists and two steals as he attempted 13 free throws (making 11), while playing a team high 45 minutes as Nurse relied on his starters heavily, playing an eight-man rotation. Terence Davis was the lone newcomer on the roster to get into the game. Though the Raptors had an opportunity to win the game in overtime, Norman Powell’s pull-up three was off the mark. In the extra session, Toronto outscored New Orleans 13-5. With the score tied at 122 with 2:23 remaining, the Raptors closed on an 8-0 run as Lowry hit a pair of free throws and then VanVleet and Lowry traded three-pointers to seal the win.

“I went into it with an open mind, I wasn’t really sure what to expect,” VanVleet said of the emotional night. “I kinda thought would be anticlimactic to some extent, or kind of dull us out for the game, but it was the opposite. Really got the emotions going again, watching it, being in the arena and feeling that energy was amazing.

“It was cool to recap all of that, get the ring and then finish it out with the win. It was a pretty good night.”

While fans leaving the arena certainly enjoyed the victory, the highlight was celebrating the championship that was brought to Toronto. Whenever a team reaches the ultimate height of success, the conversation quickly turns to whether they’ll be able to reach that summit again. What this conversation fails to consider is that certain accomplishments simply endure on their own. Whatever does or does not happen next, there are the years and moments before the Toronto Raptors became NBA Champions, and then there is the moment that they did. Tuesday marked the beginning of a new NBA season where 30 teams will take the first steps toward what they hope will culminate in an NBA title. Include the defending champion Toronto Raptors on that list as well.