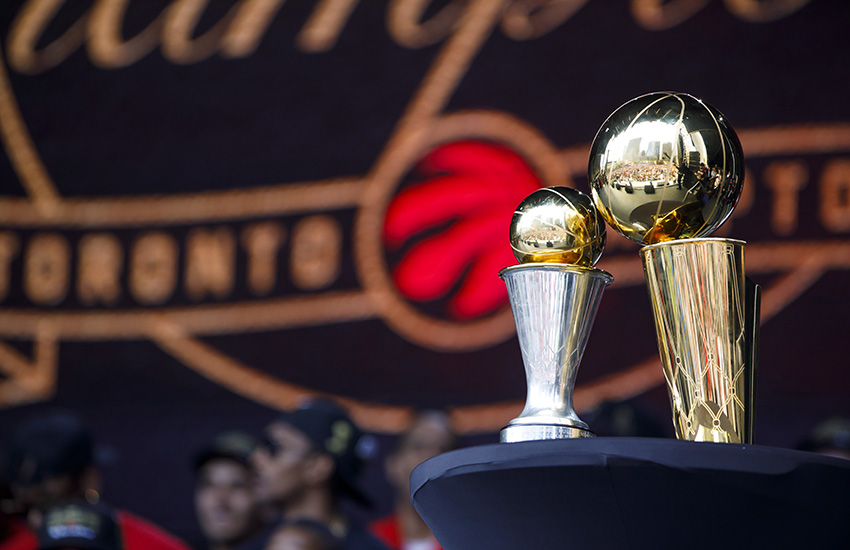 The thing about a championship is that it is forever. Whatever happened before can be looked at in a brighter light; sharp edges become smoother because they were part of the journey. Similarly, whatever comes next cannot be separated from the trophy’s afterglow, even if it isn’t what the winners had hoped. The banner still gets raised, the rings still delivered on opening night.

The Toronto Raptors lifted the Larry O’Brien trophy—now forever known as the Larry O’B in Canada; thanks, Kawhi—on June 13 in the final NBA game to be played at Oracle Arena. The team had roughly three weeks to celebrate the first championship in the franchise’s 24-year history before news broke that Finals MVP Kawhi Leonard would be signing with the Clippers and taking his talents on to Los Angeles. So, what now? For a team that is still so fresh off of its title run that Serge Ibaka is still posting near-daily selfies from various beach locations—shirt off, sunglasses on—things look quite different than they did just a few weeks ago. Players change cities and jerseys more than ever in today’s NBA. It is the superstars among them that know how to wield their power. The Raptors gave their superstar everything they could, but only he could determine his—and, by extension, their—fate.

It is impossible to fault Leonard for wanting to play at home. He has made no secret of his desire to be in California, first announcing his trade wishes to the San Antonio Spurs in 2018. Kawhi came to Toronto by trade a year ago for what seemed like a king’s ransom at the time—DeMar DeRozan, lifelong Raptor and the franchise’s greatest player—in exchange for a player, while great, was still coming back from having missed 73 games. At his introductory press conference in September, Leonard never made a promise to stay in the Six, but stoically pledged to take the season game by game and keep his focus on being the best player he could. Fast forward 11 months to a championship, a(nother) Finals MVP and countless highlights that will go down in Raptors lore forever, Leonard has more than delivered on his word.

Though Leonard’s decision to leave for the Clippers stings—the trophy, the victory parade, all of the gorgeous murals around the city, an entire country rooting for one team—Toronto always knew he could leave. When Raptors president Masai Ujiri spoke with reporters for the first time since news of Leonard’s decision at summer league in Las Vegas, the message was clear: Onto the next. No time for panic nor anguish. Things will be fine.
“We got a great deal out of this,” said Ujiri. “We won a championship. We’re happy. This is the NBA and this is how it works. I always say there’s no time to go out, you can’t cry, you can’t go hide under a table and cry. Honestly, I’ve lost no sleep. I’m not disappointed. It’s on to the next. I’m telling Raptors fans, I’m telling everybody don’t lose one day of sleep, one second of sleep we’re going to be just fine. We’re going to be alright.”

Nick Nurse had a whirlwind first season as head coach. A month after the Raptors hired him, the team traded for Leonard and Danny Green, immediately spiking expectations for the first-time NBA head coach. The Raptors won the title 364 days after his introductory press conference. It has been a truly wild year, now capped off with Leonard leaving in free agency. While this would seem like a lot to handle for any coach, Nurse has taken it all in stride. Before going to Vegas to watch the summer league team, Nurse joined local rock group Arkells onstage at a recent show in Toronto. According to ESPN’s Rachel Nichols, he was checking out a Prince impersonator when he got the bad news text from Leonard.

Throughout his career, Nurse has been praised for his innovative approaches and willingness to experiment and explore on the fly. Though the Raptors will be defending champions next season, they will not feel the full amount of pressure that typically accompanies that label. Raptors fans will not get to watch Leonard’s brilliance every night, but they will get to see Nurse’s creativity at work.

In the weeks after Leonard’s decision to go to the Clippers (as well as Green following him to L.A. to play in the other locker room at Staples Center with the Lakers), the Raptors signed a handful of players. From deadeye shooter Matt Thomas who was playing in Europe to Rondae Hollis-Jefferson, Stanley Johnson, 2019 draft pick Dewan Hernandez and undrafted guard Terence Davis, the Raptors get significantly younger and remain extremely defensive-minded and versatile heading into the 2019-20 season. None will be a replacement for Leonard, but each will bring facets of the Finals MVP’s game.

They also seem to be taking a page from Fred VanVleet’s “bet on yourself” playbook, betting on their proven track record of player development by adding players who are still looking for the right opportunity and fit. How satisfying it must be for VanVleet, now an NBA champion, who went undrafted just three years ago, to hear new teammates talk about wanting to be “the next Fred VanVleet.”

As things stand today, aside from Leonard and Green departing for L.A., Toronto’s core remains intact. Kyle Lowry, Serge Ibaka and Marc Gasol are still Raptors. So is the aforementioned Fred “Received-a-Finals-MVP-vote-from-Hubie-Brown” VanVleet, along with Most Improved Player and burgeoning star Pascal Siakam. There could be big seasons (and opportunities) ahead for Norman Powell and third-year forward OG Anunoby. Anunoby had an emergency appendectomy the day before the playoffs started and didn’t log a minute afterward. After this season, only Powell and Anunoby currently remain under contract for the Raptors.

So many things had to go right in order for Toronto to win this title. In addition to Leonard’s spectacular postseason, the Raptors needed Gasol’s (deservedly) hyped defense in shutting down Nikola Vucevic in Toronto’s first round series against the Orlando Magic. They needed it again against Joel Embiid in the team’s second round series against the Philadelphia 76ers. Ibaka had his moments when Nurse decided to go big against the Sixers, then came up huge in road games in the Finals against the Warriors. After struggling through the first two rounds, VanVleet flew home to Toronto for the birth of his son, Fred Jr., and closed out his own postseason by refusing to miss from the floor, exploding for 3-pointer after 3-pointer in the Conference Finals against the Milwaukee Bucks, then doing the same while also playing defense on Steph Curry in the Finals. His fourth quarter performance in Game 6 is an instant classic that only gets better with time. Powell, too, came alive against the Bucks as the Raptors needed him most. There was the 32-point Finals debut explosion from Siakam, six threes in Game 3 from Green, and of course, Lowry’s 26-point Game 6 performance, including 15 points in the opening quarter and 21 at halftime. In addition to Leonard’s all-time postseason run, each of these moments were needed. Each will be remembered by Raptors fans for an eternity.

Toronto will undoubtedly take a step back this season, but it’s important to remember that the Raptors went 17-5 without Leonard in the regular season. If the remaining core stays intact throughout this upcoming season, it isn’t unrealistic to think that Toronto could have homecourt advantage in the postseason despite things looking much different than they did just a month ago.

The Raptors are in uncharted territory: after winning a championship for the first time in franchise history, they’re now navigating rougher waters, adjusting to the departure of the 2019 Finals MVP. Despite this new direction, the players, coaching staff and front office remain focused on the task at hand. If there is one emotion that seems to define the Raptors in the wake of Leonard’s decision it would be pride. Meaning don’t get so caught up in what Toronto has lost that you count out what they still have: a collection of players who have spent their careers playing with chips on their shoulders, a group of guys intent on showing that they’re still the defending champions regardless of who is or isn’t suiting up in a Raptors uniform next year.

Though the season ahead for Toronto is filled with plenty of unknowns, the identity that’s been built remains. In weak moments, when fans are unsure about what the near future holds, count on VanVleet to remind everyone of one certainty: Addressing fans from the team’s official Instagram account from Las Vegas summer league with Siakam at his side, VanVleet said, “Still champs. Just In case you were wondering, we’re still the champs.”