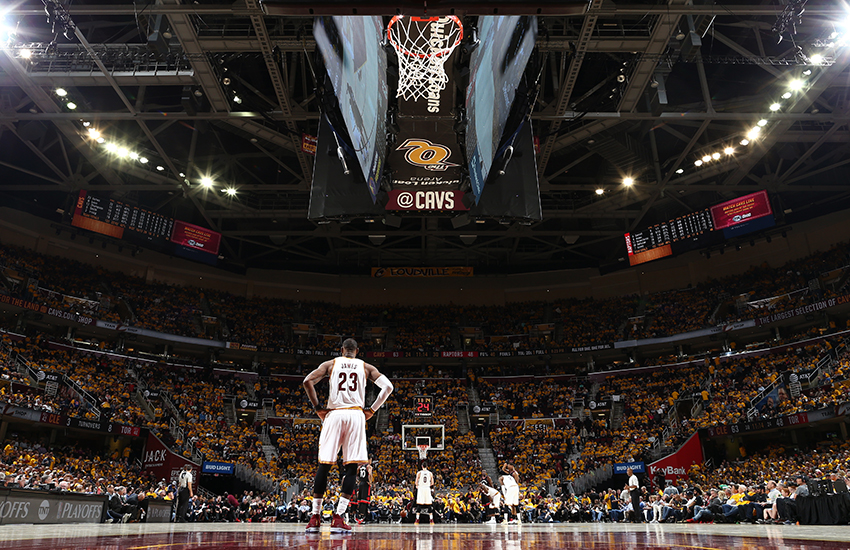 Being great isn’t an occupation for the faint of heart. Being great is a full-time, uphill journey that knocks you down repeatedly before allowing that first victorious breath at the top of the hill.

Being great is relatively easy compared to staying great and maintaining greatness. Once there, the question becomes: How great are you? Or more importantly for our purposes, how great is LeBron James?

Greatness is attainable for some. For a rare few, even maintainable. But perfection is not. As a player’s legacy grows, as their legend bolsters right in front of our eyes, the resistance to their claim is also questioned. Narrative can carry a player up the pyramid but the opposite is also true. Negative spin can tarnish up a player’s legacy in the eyes of the spectators whether its base is fictional or not. Narrative spins tangled webs around everyone and few get permanent seats at the big boys’ table because of it. Every misstep strengthens the bind and before long what was a reasonable critique has become a constricting cloak of failure.

According to stats.nba.com, 486 players dressed for at least one game this season and James has played more minutes in the Finals than 420 of them have played in the playoffs. He has played more minutes in the Finals than his current rivals DeMar DeRozan and Kyle Lowry have played in the postseason, period. Knowing just how busy James’ June schedule is every year, what stands out more: The previous stat just shared or the rhetoric that the East is weak? Greatness is fickle and spin is unpredictable.

Consider some of LeBron’s contemporaries in the early part of his career. Gilbert Arenas was great, for a few years it looked like he might maintain his greatness and be more than a footnote in NBA history. Sadly, he made poor choices that aside from the obvious included not taking care of himself. Arenas was bounced from the League before the dialogue of his, “how great” discussion truly began. Tracy McGrady’s pinnacle was bright enough to get him into the Hall of Fame and powerful enough to keep him relevant in the best player conversation for however brief. Unfortunately, T-Mac’s body failed him and so did the fans and media who plagued him over the lack of first-round success. Which is more memorable: McGrady’s 13 points in 33 seconds or that he could never escape the first round of the playoffs? Be careful which story you give power to.

The cautionary tale might be the player that LeBron was judged against in the beginning of his career, Carmelo Anthony. The two were separated by the infamous Darko Milicic in the first three picks of the 2003 NBA Draft. LeBron and Melo were supposed to be the second-coming of Larry Bird and Magic Johnson, two prodigious stars who would fuel each other’s teams and battle for championships for the next decade. Melo was even considered superior by some circles, having cut down nets at Syracuse and guiding his Nuggets to the playoffs in his first two years while LeBron watched (the only two seasons LeBron didn’t play in the postseason). We now know how that narrative went.

James is 32 years old, the unquestioned best player in the NBA and considered a sure bet to make the Finals for a seventh straight time and for the eighth time overall. James, now in his 14th NBA season, has won four MVP awards. When the Cavaliers make the Finals, he will have stopped playing basketball before June only six times in his career.

Greatness is a measuring stick. Do you remember when your mom marked your height on the door frame, keeping track of your progress as you grew from child to teenager to adult? The world has had James pressed against that door frame every moment of his life since he was on the cover of Sports Illustrated as a 17-year-old, constantly marking his every achievement and weighing it against his peers. The key difference being most of the world had emotional connections to those peers. Fans of McGrady, Kobe Bryant, Tim Duncan and of all the other legends who came before him. The deck was stacked for James the same way it will be for Kawhi Leonard, Giannis Antetokounmpo and every star that comes next. To acknowledge the presence of greatness in the immediate is to disrespect the past or so it would seem.

James is clearly miles ahead of Arenas or McGrady, and even the staunchest Bryant and Duncan defenders are having trouble holding James down. Why are the masses still caviling each and every step of James’ career? We are left with two clear factors.

Firstly, the culture of this game is locked in a never ending conflict of, “If you’re not first you’re last,” and “winning isn’t everything.” James has been held up by his fans and his critics to both extremes. His fans made him a martyr, sensationalizing his failures and his critics have nitpicked every victory to the bone. James has been revered for his three championships but he’s also been reviled for his four failures in the Finals. Fans are and have always been passionately divided on the context behind James’ successes and failures.

Secondly, James has been held to the golden standard since day one which is a testament to his greatness but also presents a befuddling quandary. McGrady wasn’t enough, Bryant wasn’t enough, because the predetermined landing spot for James has always been higher. As Howard Beck wrote so beautifully last week, “Everyone wanted to be Michael Jordan. But to be the next Michael Jordan was both a compliment and a burden, the ultimate aspiration and an unshakable curse.”

It’s not just the fans and the media who locked James into this insurmountable quest, James himself has embraced the journey.

“My motivation is this ghost I’m chasing. The ghost played in Chicago,” said LeBron James in the now infamous Lee Jenkins feature. The quote seemed to jump at people but the comparison had been made a billion times before just never from the mouth of James himself, not like that. Everybody knew it would come to this, no matter what the pacifist fan tell you, we cannot just let them both be great. That’s not how sports work, that’s not how greatness works and that’s not how life works.

In some ways LeBron has exceeded the hype that comes with being declared the assumptive No. 1 pick while in high school—as a junior. He entered the NBA as an 18-year-old rookie who was the Kid LeBron persona of Nike’s early marketing campaign. He was always Athlete LeBron and we saw plenty glimpses of Business LeBron throughout the years, but now LeBron is more resembling Wise LeBron at this stage, having played almost 50,000 combined regular- and postseason minutes. LeBron went from flip phones, baggy attire, a “preposterous” $90 million Nike endorsement and driving a Hummer to being an investor in tech and media, custom suits, a reportedly $1 billion lifetime Swoosh deal and schlepping his kids around a sensible Kia. Through it all, he’s won titles—a few shy of his braggadocio in South Beach, but he more than made that up with a promise kept to Cleveland—only six legends stand in front of him in the all-time scoring ledger, he’s putting kids through college and despite claims to the throne—be it triple-doubles or three-point barrages—remains the best player in the game. LeBron’s #StriveForGreatness isn’t just a throwaway hashtag, it’s been his lifestyle.

So here we are, James’ whole career has come to this as it was meant to. James or Jordan. The unquenchable search for perfection, the King vs. the GOAT. The never ending run of rhetoric, hyperbole and gross mistreatment of two icons who never really had any say in the matter. The ending of this story will not be uplifting, but like the chase of perfection it was never within our grasp to have any other outcome but disappointment.

James and Jordan will be compared for all eternity and I’m genuinely sorry to say, there will be no victor. There’s no clarion line illuminating the pathway to the NBA’s own Iron Throne. There are those who believe James’ all-time Finals showing last year elevated him to the elusive GOAT status. On the other side, even if James went on to win seven rings (one more than Jordan), there are those who would never bend the knee in fealty to him. Heavy is the head that wears the crown.

You don’t have to accept that, and if you did, the never ending sports dialogue would be worse for it. But deep down we all know winning in the grand scheme has always been subjective.