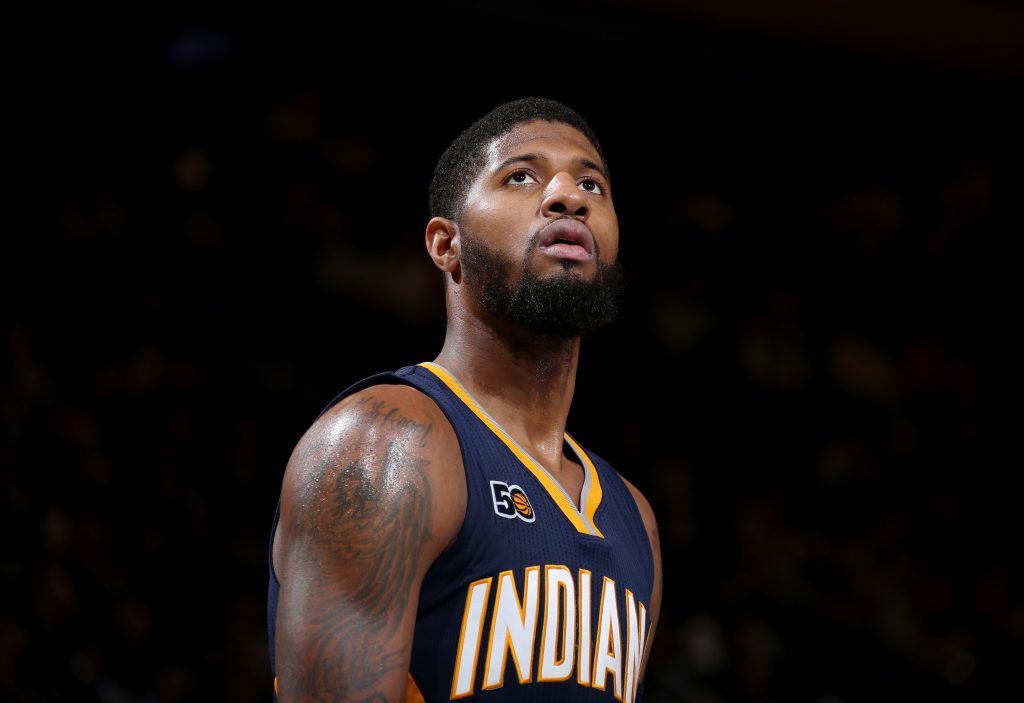 Sitting on the egg of Paul George is the gargantuan girth of all Indiana.

It’s a bizarre notion, of that there is no doubt. Waiting on an All-Star in his seventh season to reach another level seems like false hopes and yet it’s the only way in which the Indiana Pacers will ever reach contender status.

George, who had an excellent First Round series against Toronto, seemed to exclaim “I’m back!” to the basketball world in the postseason. PG-13 averaged 27.3 PPG (on 46 FG percent and 42 three-point FG percent) 7.6 RPG, 4.3 APG and 2 SPG, pushing the eventual Eastern Conference finalists to seven games.

The Pacers lost the series but George made DeRozan look like a scrub at times, beating him to the spot over and over on defense. He also torched the Raptors defense on a ridiculous .632 True Shooting Percentage (TS%).

It was a huge moment. Even in the face of defeat, George balling out on the big stage just two years after his gruesome injury was as hopeful a sign for the Pacers faithful.

Following the almost cheerful playoff loss, a gold medal for George, and a fast and furious off-season that saw Indiana vastly change their roster—expectations were high. Fast forward to today and the Pacers have struggled mightily.

The Pacers are 15-15, mired in a spot that most .500 teams usually find themselves: fighting for a spot in the Eastern Conference playoff picture. George has missed time with minor injuries, and the Pacers rank in the bottom half of the League for both their ORTG (21ST) and DRTG (17TH).

George’s numbers are right in line with last year’s (23.1 PPG, 7 RPG, 4.1 APG and 1.9 SPG). The only differences being a slight dip(about one point) in scoring and assists (3.1 this season). His shooting percentages are up and he’s played a greater leadership role than in years past, but any improvement on George’s part hasn’t been reflected in the Pacers’ record.

You can’t put it all on George and yet if we were talking about Carmelo Anthony, Kevin Durant, James Harden, LeBron James, Russell Westbrook, etc. We would point our finger at the super human who despite dazzling our minds on a nightly basis had a team that was slacking in the grand scheme.

We’ve Been Here Before

George who is having a modest season is leaving the masses wanting. George’s growth both physically and as a basketball player since his rookie season have had many projecting him as a future superstar. However, here we sit in season seven, one grotesque injury and three All-Star campaigns later and we’re still looking for that next big jump.

It’s important to remember George hasn’t been bad—hell, he has been damn good. He just hasn’t reached the great level necessary to carry a mediocre team to the promised land. It’s a familiar feel for Pacers fans who’ve been treated to many All-Star talents falling just short of the next echelon.

Notable Pacers in their seventh season:

Despite having wonderful and storied careers, no one on the list above went on to win the MVP, nor did any of them go on to be first-team All-NBA. O’Neal made it to the second team once, Miller made it thrice to the third team, as has Paul George, but that’s the Pacers pinnacle. Not one player rocking the Indiana threads in the NBA has been in the best player conversation on any given year.

We’re nearing the point in the season where the small sample size isn’t a considerable worry but let’s assume for argument’s sake George heals up and his numbers climb some as the season goes on.

Below are wings with relatively similar numbers in their seventh season. It’s important to note that while PER isn’t the only measuring stick of value it gives us a snap shot. It might also be worth jotting down that not one player on this list had a superior PER to the mark they set in their seventh year or earlier. Meaning, to some extent, none of those listed below had a greater statistical season after year seven.

George is a very good defensive player, PER doesn’t do that aspect of his game justice and it’s fair to say what he sometimes lacks in offense, he makes up at the other end. That said, the Pacers flat out need more.

George is being asked to carry a massive load at both ends and he’s being asked to do so with a sophomore as the team’s second best player. The Pacers have a long and proven track record of being good but as their marquee name, it’s on George to bump them up to great. The genuine problem is, what if he simply can’t reach that next level on a regular basis?

Very few players can carry a team without a second All-Star and to this point Paul George has been on the fringe of that benchmark himself.

Has Paul George been a top 12 player in the East to this point? Is he an All-Star right now?

Many seem to believe George is going to turn it around, or that he hasn’t peaked yet, but you have to wonder if that’s supportable or hope from the eternal spring of fandom.

As mentioned, George is in his seventh season as a pro. Drafted 10th overall in 2010, the chart compares him to every other No. 10 pick of the 20 previous years. 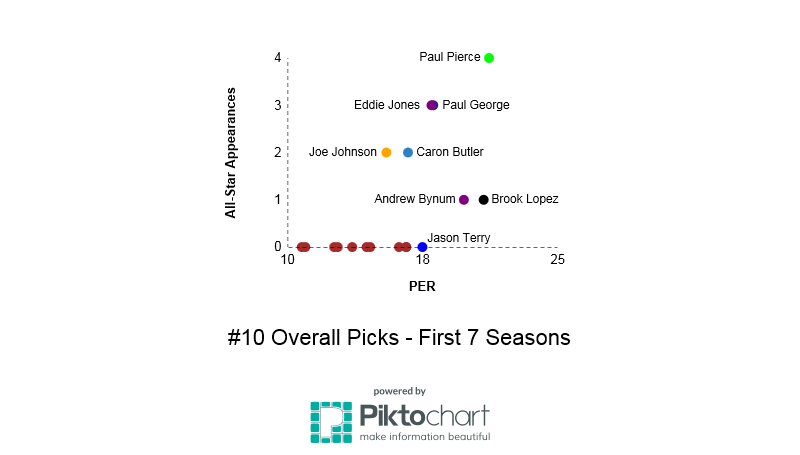 Taking a look at the average PER in years 1-7 and tallying up the All-Star games it stands that George is arguably the second best player drafted at No. 10 in the past 21 seasons. He sits behind only Paul Pierce in both PER and All-Star invites. It’s nothing to be ashamed of as Pierce might go down as one of the 50 best to ever play this game and is a surefire Hall of Famer.

All drafts aren’t equal neither are the teams evaluating talent but it’s hard to imagine the Pacers doing better than they did with George. He currently doesn’t belong in the superstar tier, it stands to reason that he will never will, but take solace in the fact that he has absolutely delivered in relation to his peers.