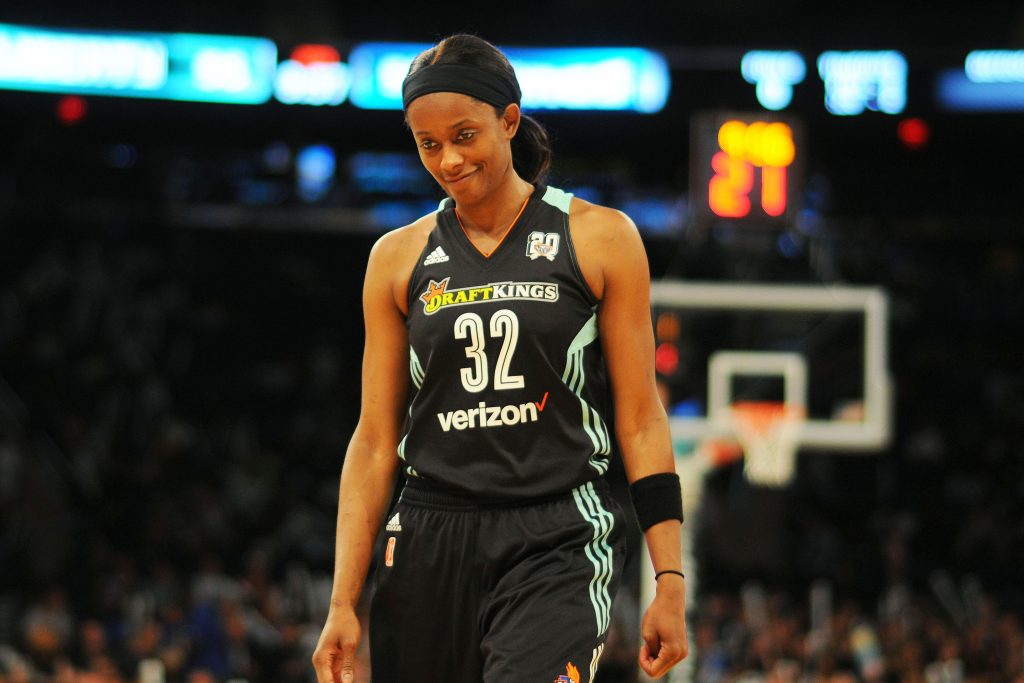 There is an often-repeated expression that notes people may forget what you said, but they’ll always remember how you made them feel. That seems an appropriate thought for an article about Swin Cash’s impending retirement at the conclusion of this WNBA season. She is one of the league’s larger than life personalities—not only on the court, where her accomplishments are historic, but also in the hearts of fans, friends, family and the community.

“I want to be remembered not only for the things that I did on the court, but what I stood for off the court,” says Cash. “I’ve always been about that since the day that I set foot in this league. I wanted to be an example to other players coming in the league, to young girls and to women that watched our game.”

Named to this year’s WNBA Top 20@20 list, Cash has amassed an extraordinary resume: two NCAA titles at the University of Connecticut, three WNBA Championships, two Olympic gold medals, two-time All-WNBA Second Team selections and four-time WNBA All-Star. Cash will finish as just one of 17 players to eclipse 5,000 points in career scoring (currently 5,104), she is seventh in rebounds with 2,516 and 15th all time in assists (1,129). Asked what she remembers about her wins and milestones, she said, “The friendships you make is really what it’s all about.”

So, we’re going to let some of her friends, teammates, colleagues and family share some thoughts. Let’s be clear, Cash has been called a diva, even by herself—passion for fashion, loves glam and compulsively late—but she’s also a leader, open-hearted and a tireless hard worker.

“She gives me so many words of encouragement, even now as women,” says Ashley Robinson, Cash’s teammate on the 2010 Seattle Storm team that won the WNBA Championship. “She is one of those people that respects every year that she’s gotten to play and knows that basketball is a gift.

“Swin is always late and she has a gift of making you late with her,” she adds. “She asks you to watch her bag or she asks you to go get her a magazine. You can’t say no to Swin Cash, so you’re both late together.”

Tina Thompson, who came to New York City for the retirement ceremony the New York Liberty held on September 7, referred to Cash as “an adamant professional.”

“She comes to work every single day and brings her best effort every time she steps in between the lines,” says Thompson. “That’s something you want and you look for in a teammate.”

Bill Laimbeer built a franchise around Cash. When he was asked to take over the struggling Detroit Shock in 2002, he not only made Cash a starter but appointed her team captain and leader. The next year, they orchestrated the “worst to first” turnaround and won the WNBA title.

There have been disappointments and challenges, including two serious injuries—a torn ACL and a back injury that required surgery. During testing for the back injury, doctors also discovered a tumor in her kidney which turned out to be cancerous, which was removed. When she spoke to HOOP after winning the 2010 WNBA title in Seattle, she said that championship was particularly sweet because so many people had counted her out and said her pro days were done.

After making the 2004 Olympic team, she wasn’t selected for the 2008 team. Undaunted, she asked what she needed to do better and did it, earning a spot on the 2012 team.

“It would be easy to have said, ‘That’s it, I’m done,’” says Carol Callan, women’s national team director for USA Basketball. “That’s maybe her greatest mark—she comes to work every day and gives her very best effort. She never stops working. She never stops thinking what she could be a part of and it shows.”

Callan remembered Cash taking her aside during a national team trip and telling her that she’d been selected as a special ambassador for UNESCO, a program of the United Nations that has the credo that peace must be established on the basis of humanity’s moral and intellectual solidarity.

Cash is a deeply spiritual person. In her speech at her retirement ceremony, she not only thanked God, but thanked the Liberty chaplains.

“She never missed a chapel,” says the Liberty’s longtime chaplain Yvette Hamilton. “Even in chapel, she was a leader.”

Current Liberty teammate Shavonte Zellous saw Cash as a role model. While a student-athlete at the University of Pittsburgh, she watched as Cash won Pittsburgh’s Dapper Dan Award for 2006 Sportswoman of the Year.

“I took a picture with her and thought, ‘I want to be just like you,’” says Zellous, who won the same award two years later and also began her pro career with the Detroit Shock. “Watching Swin, watching everything she’s done, inspired me.

“When you watch Swin, you knew what type of player she was. You knew what she wanted to do. It’s just great to play with her now.”

Liberty associate head coach Katie Smith was Cash’s teammate at the 2004 Olympics and on the Shock. She referred to Cash as “a little bit of everything.”

“She’s a piece of work,” says Smith with a laugh. “She’s a lot of fun, but at the end of the day, she’s always coming to work. It’s on and off the floor—she definitely practices what she preaches.”

Off the court, Cash established Cash for Kids, a charity with the mission to “motivate, educate, & elevate” kids with a particular focus on fitness. Although basketball has taken her far from her family’s home in McKeesport, Pennsylvania (near Pittsburgh), she always remains connected. A contingent of Cash for Kids participants came to New York for the retirement ceremony and two nights later played their own game on the court at Madison Square Garden.

Liberty director of player development and WNBA legend Teresa Weatherspoon said Cash has brought leadership and experience to the Liberty, helping the young players find their own bests on and off the court.

“She wanted to be helpful to other people in order for our younger players to understand what they must do to be elevated to play at another level,” says Weatherspoon. “Swin brings positive energy wherever she goes.”

Cash’s husband, Steve Canal, said he’s excited to see how this transition in his wife’s life unfolds. She is passionate about everything she does, from being a TV broadcaster—studio analyst for MSG Networks covering Knicks pre- and postgames as well as the weekly coaches show and co-host of We Need to Talk, the first-ever nationally televised all-female sports show—to her involvement with the WNBPA (players’ union) to life.

“She very passionate about everything,” says Canal. “If we’re taking a trip somewhere, she wants to see everything and explore. Even when we go to a restaurant, she loves to explore.

“To transition from [pro basketball], I know it’s emotional for her, but at the same time I know she’s ready for the next challenge.”

It seems appropriate that Cash finishes her pro career in New York. It’s not only her off the court home, but it’s a city that reflects her style and attitude.

Cash said her proudest moment in her pro career was this summer when WNBA players around the league spoke out on Black Lives Matter. A fan of social media, she is intent to use her platform to address important issues.

“Swin did it all,” says her proud mother, Cynthia. “As far as I’m concerned, she can say, ‘There’s nothing I didn’t go out and accomplish.’”

“I love the game, I respect the game and I’m giving it all back,” says Cash.

Oh yes, she also thanked the media who show up and cover women’s basketball on a regular basis, not just big games. As one of those people, I say it’s been a privilege. Let’s finish this off right.