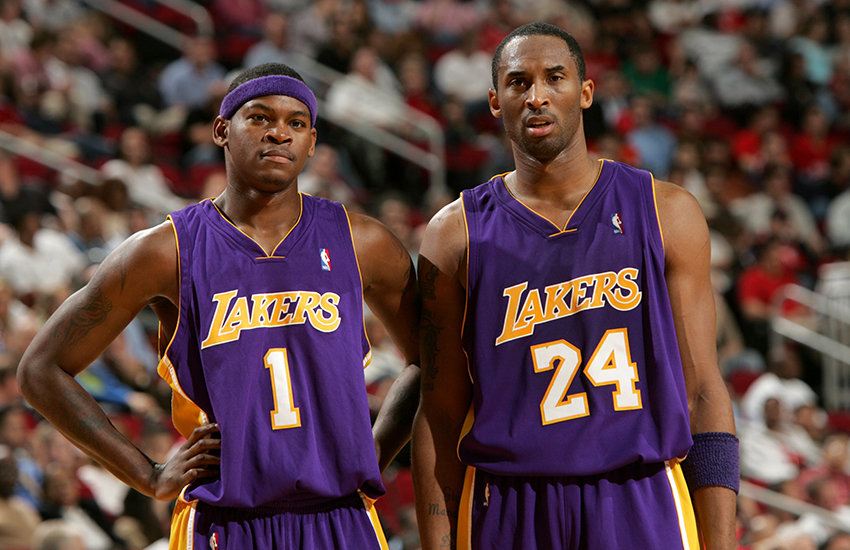 Sandwiched between Kobe Bryant’s two championship runs in the start and end of the 2000s was a three-year period that saw the Lakers trying to rebuild and Kobe trying to establish his new persona as the singular face of the Lakers franchise. Gone was Shaq after the 2004 playoffs, along with head coach Phil Jackson and all the veterans on the threepeat squads from 2000-2002. Phil would return, but the Lakers would struggle  in spite of Bryant’s two best scoring seasons—in 2005-06 he averaged 35.4 PPG (including his 81-point game) and in 2006-07, he put up 31.6. It was also those two seasons that he would be paired with journeyman point guard Smush Parker, forming one of the oddest backcourts. You had one of the most accomplished 10-year veterans, a seven-time All-NBA with three rings juxtaposed with an undrafted basketball vagabond who was most famous for his reputation in the New York City playground scene and had played for four teams (one being Aris Thessaloniki of the Greek League) before latching on with the Lakers in 2005. Parker was a surprise pick by Jackson to start at point guard, a spot he held for 162 straight games. During that time, Parker averaged 11.3 PPG and 1.6 SPG, decent numbers considering the backcourt counterpart that put up around 33 per night. The Bryant-Parker duo never coalesced (the Lakers were first-round exits in their two seasons together), and Parker was not re-signed in the summer of 2007. Once Parker left, Kobe would go on to win his one and only MVP and the Lakers would return to the Finals stage. Parker would play 28 more NBA games with the Heat and Clippers before disappearing from the League and playing professional basketball internationally.

The whole Parker-Bryant story would barely register a blip if not for Parker’s now-infamous 2009 interview outside of the West 4th Street Cage, one of the landmark courts that made Smush a household name in the New York City playground scene. In that interview, Parker said some regretful things about his two years as a Laker: “Playing with the Lakers was an overrated experience…the problem was…with your boy, 24, formerly known as KB, Kobe Bryant…The reason why I say overrated is because everybody thinks that playing with Kobe Bryant is the best thing since sliced bread, when it’s not.”

Parker would add that Kobe was a bad teammate that wouldn’t talk to his peers, a selfish player who broke off from the offense and he would stop passing the ball to Bryant.

This would lead to a war of words that Parker had no chance of winning. After an innocent preseason game in 2012, the Mamba had plenty to venom to deliver.

“Smush Parker was the worst. He shouldn’t have been in the NBA, but we were too cheap to pay for a point guard. We let him walk on.”

“Smush Parker, with Tierre Brown as the backup. I’m taking 45 shots a game. What was I supposed to do, pass the ball in to Chris Mihm? Chris Mihm?”

The beef would simmer for some years before two championships, a 20-year career, time and an apology would evaporate . But with the tragic death of his onetime adversary and teammate, Parker, now heavily involved in The R.O.C.K., a Brooklyn-based ministry, opens up about the good memories he had with Bryant, his regretful comments and more importantly, letting go of the anger.

Where were you when you got the news?

When I got the news, I was in church, one of the members showed me a post about Kobe passing. My initial thoughts is that this is a hoax, and it’s not real. After it was confirmed, the shock of it all set in. I got very emotional. I couldn’t hold back the tears and it affected my body to the point where I couldn’t stand anymore. It felt like the earth started to shake beneath my legs and I had to be held up. I couldn’t control the emotions that were going through my body.

What type of impact did Kobe have on you as a teammate, a competitor and as a person?

Playing with him in the backcourt gave me a front row seat to his greatness—just the level of determination perseverance, focus, and discipline that he had for his craft. A prime example of that is when we had a game in Minnesota. In the game, he had a bad shooting night, Kobe went 1-13 from the floor. I don’t remember if we won or lost, but after the game, after they emptied the arena and while both teams were packing up to leave, he put on his practice gear and put up so many shots before we left the arena.

What was it like having Kobe as a teammate and going up against him during practices?

During practice, I didn’t have to go against him much because I was a starter, so we played on the same team. But there was one instance that I do remember in training camp. I was having my way with all the guards, running circles around them. Kobe took it upon himself to switch [teams] and guard me. When Kobe wanted to test people, he would get physical. For one play, he guarded me for 94 feet, the whole way up the court. He was body-checking me, hitting me, knocking my arm, trying to get the ball. The Brooklyn in me wanted to go at him. I wasn’t going to back down, we had this ongoing battle all the way up the court.

What are your favorite memories of watching Kobe on the court?

For me, one moment had to be the 2006 playoffs against the Suns. The 3 before put us back in the game, Phoenix called a timeout and I came out to get the steal which led to Kobe getting the shot off was just electrifying—that’s one word that I can use to describe that game. That was the greatest feeling of my professional career.

You had a front-row seat to one of Kobe’s greatest games of his career: In Toronto, when he scored 81 points, the second-most in NBA history behind Wilt Chamberlain. What was like being a witness to history?

Parker: I remember that game vividly. Kobe saw the team was struggling in the first half, so he took it upon himself to carry the load. I didn’t understand what type of game Kobe was having until the end of the third quarter. We looked up and the scoreboard saw 61 points! Lamar Odom and I caught eyes and I was thinking that this guy is going for 100. There were shots that he was taking left me amazed because of the difficulty of shots that he was hitting was out of this world, it was a great performance. Kobe knew he made history, we all knew he made history. As professional players, we understand that feeling at different points of the game when we get in the zone. We understood what Kobe did was ridiculous, but he did it at the highest level of basketball, it was amazing!

What are some special memories that you shared with Kobe?

Everything between Kobe and I was professional and it was on the basketball court—all the chest bumps, the celebrations after good plays and wins, little things like that people don’t know gets overlooked.

You had a complicated past with Kobe as teammates. Can you talk about the biggest misconception about your relationship with Kobe?

That we didn’t have any respect for each other’s game. If you pay attention to the two seasons that we played together, there were a lot of positive embraces, a lot of affirmation, hugs, eye contact and fist bumps. Kobe and I shared many positive moments like that.

The media and fans love to speculate on your relationship with Kobe. From your point of view, what went wrong with your connection with him?

I went on to say a couple of words in the media that went viral and Kobe got wind of it. They were hurtful words and I’m sure his feelings, pride and ego were hurt, so he felt he needed to retaliate and that’s what a lot of people saw and read. People base their opinions on me based on the things that Kobe said in retaliation to the statements that I made. Now I get hate mail daily, it’s apart of my life. They said Kobe hated me and I was the worst point guard in the NBA, but people don’t understand that his comments were just a retaliation against the things that I said. At the end of the day, we were brothers, we shared a lot of respect for each other and we appreciated each other’s game when we played with each other.

Did you and Kobe ever reconcile your differences?

Three years ago I decided to send him a letter. It was pretty much an apology acknowledging what I did and said was wrong. I was young with a young mind, young thoughts and young actions, and I apologize for my role in the negative back-and-forth that we had. I would’ve loved to verbally say that to him. I wanted to be in the same room so we could’ve talked, but unfortunately, that’s no longer the case. If we could’ve spoken, it would’ve meant a lot. To some people, I will always be remembered as the guy that Kobe hated and that’s not a legacy that I want to be remembered by. At the end of the day, I wish we had the chance to hash things out, not only for myself but for him also. I think it would’ve benefited both of us if we came together and squashed it.

Can you talk about the importance of forgiving and making up with someone that you had a falling out with before it’s too late?The importance of forgiving someone is not always about the other person. When you forgive, it takes a lot of stress and negativity out of your life. When you have negative feelings about someone it just hinders your life, it puts a cloud of negativity in your mind, heart, and spirit—it’s unhealthy. When you forgive someone, you’re releasing that energy out of our lives, and you can start to see certain things that you would’ve seen before because you had that cloud in your life.

How do you plan to honor his memory?

Just to show the new generation of players that you won’t achieve your goals without putting in the hard work, just like Kobe and other great players did.