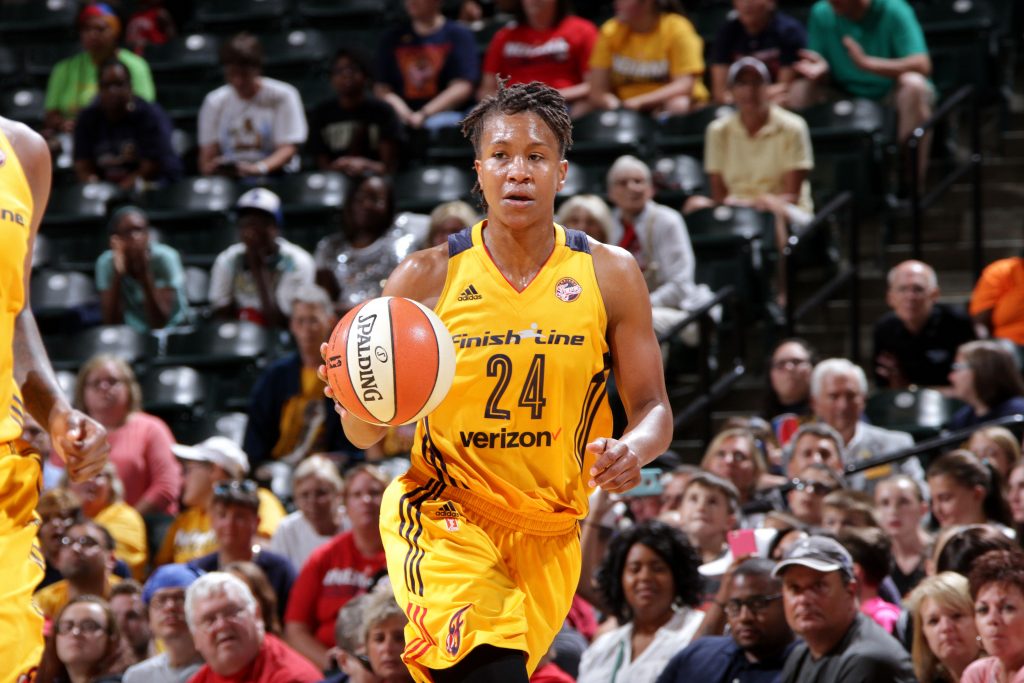 It seems appropriate that many of Tamika Catchings’ most memorable moments involve team achievements. Her individual accolades are extensive, most recently being named to the WNBA Top 20@20, in honor of the league’s 20th season. She has been league MVP, seven times named to the All-WNBA First Team and is a 10-time All-Star, but her drive for excellence reflects her desire to propel her team to glory.

She built the Indiana Fever franchise from the bottom up. Drafted in 2001, just a year after the Fever’s inception, Indiana basketball fans had to wait until 2002 as Catchings healed from a torn ACL. Even before her first game in uniform, she had a legion of fans. In her first year in action, she led the Fever to its first-ever playoff appearance. In 2012, the Fever became only the second Eastern Conference team to claim a WNBA Championship.

Most recently, Catchings, 37, played on her fourth and final U.S. Olympic team, with four gold medals to show for it. Now she’s back in Indianapolis for one final WNBA Championship push. When the final buzzer sounds, Catchings leaves the Fever knowing she’s built a strong team capable of carrying on without her.

Catchings spoke with HOOP about some of the most memorable moments of her professional career.

“More than anything, I remember them announcing my name. We came out of a tunnel close to where the bench is. They put a little stage there. As soon as I walked out, the crowd went crazy. I don’t remember the game, who we played, how I played or any of the details about the game. I just remember that feeling of excitement.

“The way the crowd responded, it was like I was home. It was that feeling of acceptance. This was the goal that I’d had since I was in seventh grade, to play professional basketball. Finally, I’m here. It was the most awesome experience ever.”

“I was one of the youngest with Diana [Taurasi], Sue [Bird] and Swin [Cash]. I felt like Van [Chancellor] yelled at me for everybody else’s mistakes because I was starting and playing a lot. From that standpoint, it was tough, but it was so worth it standing on the podium and winning the gold medal.

“Being able to have the opportunity to play with players I had looked up to since watching the ’96 Olympic team. The thing I talk the most about is getting to know people. That’s been the most fun part, being able to share these memories with them.

“Now here we go into our fourth Olympic Games, trying to be the leaders that Dawn [Staley], Lisa [Leslie] and Sheryl [Swoopes] were for us.”

September 1, 2005 – Indiana swept the New York Liberty 2-0, in the East Semifinals to reach the Eastern Conference Finals for the first time in history. Prior to the game, Catchings earned the first of her five Defensive Player of the Year awards

“I remember being so pumped up as a team. We were so prepared, so ready both games.”

She recalls being extremely proud of the Defensive award because she didn’t grow up being a defensive player. It wasn’t until she arrived at the University Tennessee, where the late Pat Summitt told her if she wanted to see minutes, she better learn to play D.

“To be honored as the Defensive Player of the Year was kind of a tribute to Pat. She was the main reason I learned about defense and the importance of it.”

October 21, 2012 – Catchings led the Fever to its first WNBA championship as Catchings was named Finals MVP

“What more do you have to say? It’s a tribute to our team and just how well we’ve been able to play together and how selfless we’ve been as individuals on the team.

“It was relief and a weight off your shoulders because every year you come in and the media asks, ‘Is this the year you win a championship?’ Of course, everybody at the beginning of the season in every single city is saying the same thing, ‘This is the year.’ But only one team is going to walk away with that championship. It meant a lot to win that first championship in Indiana history.”

September 29, 2015 – After losing the first games of playoff series vs. the Chicago Sky and the New York Liberty, the Fever rallied from behind to beat the Sky and the Liberty to take Indiana to its third WNBA Finals. The Fever took the Minnesota Lynx to five games, before the Lynx prevailed for the title.

“It was definitely one of those things where no one expects us to win, so all we’ve got to do is go out there and play. We went out, we played. Everybody was doing what they know they’re capable of doing.

“Defense has always been the staple of the Indiana Fever. That was the one thing I kept stressing: ‘We just have to play defense and everything else will take care of itself.’ Our offense is always predicated on how we play defensively. That was another testament of being able to will ourselves to be successful.

“Granted, we lost Game 5, but we played every single game that you could possibly play. Never count us out.”

The rest of Tamika’s most memorable moments

September 22, 2011 – Prior to Game 1 of the Eastern Conference Finals, Catchings was named WNBA MVP.

September 29, October 4 & 7, 2009 – Phoenix beat Indiana, 120-116 in overtime, in Game 1 of the 2009 WNBA Finals to mark the highest-scoring game in league history. Indiana captured Game 3 to take a 2-1 series lead, and hosted Game 4 before a sellout crowd at Bankers Life Fieldhouse; but Phoenix won Game 4 to send the series back to Phoenix, where the Mercury won.

August 23, 2008 – Returning from an Achilles tear in 2007, Catchings was the last player named to the 2008 U.S. Olympic team and captured a second Olympics gold medal with a win over Australia.

September 3, 2007 – Tied 1-1 with Detroit in the Eastern Conference Finals, the Fever’s dreams of reaching the WNBA Finals for the first time were shattered just before halftime, when Catchings suffered a right Achilles tendon tear.

August 27, 2007 – Game 3 of the East semis vs. Connecticut, Indiana scored the biggest comeback in WNBA Playoffs history, erasing a 22-point deficit to beat Connecticut in overtime and to reach the Eastern Conference Finals.

April 20, 2001 – With the No. 3 pick in the WNBA Draft, the Indiana Fever selected Tamika Catchings.