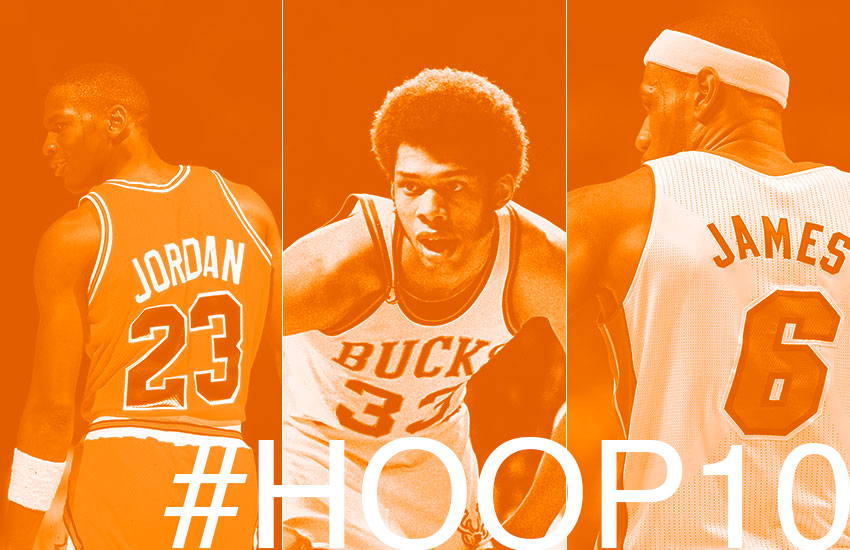 To the truly devout basketball fans, the Finals feels like ages ago. In truth, it hasn’t even been two whole months since King James and company downed a 73-win team on the road in game seven of the NBA Finals. The Cavaliers and their starving fan base were freed and LeBron James made good on a promise.

The spectacular performance of James, especially over the last three games, where he averaged 36.3 PPG, 11.7 RPG, 9.7 APG, 3 SPG, and 3 BPG, launched a title wave of claims that we may have just watched the greatest Finals ever. Can you blame them?

Where you’d place the Finals showing and the overall body of work that was James’ 2015-16 campaign is up to you. The panel of media members who worked on this project went deeper, attempting to sort out the best of the absolute best.

The question was simple yet impossible: what are the 10 greatest individual seasons in NBA history? Obviously with an out-of-season project like this, the results are subjective and the method in which we arrived is questionable, but nonetheless, it’s been a blast to see through.

The #Hoop10 project, as it has become known, is a year in the making. It’s a sister project or the next logical offseason project I had in mind following the collaborative top 50 from last year.

It goes without saying, but teamwork really does make the dream work, and this project couldn’t possibly have gotten running without the help of 28 other talented and dedicated individuals, all of whom are listed at the bottom of this article.

The guidelines were flexible — contributors had to provide a ballot of the 10 greatest individual seasons ever and provide reasoning on why each season was chosen. There were no real limitations; a player could be chosen more than once if they had worthy years, and there was no cut-off of eras or an overlying template describing how to go about creating a list.

If accolades were important to the particular member, then accolades took precedence. Depending on the panelist, winning, statistics, context and/or narrative all took a forefront for the reasoning in arranging their order.

It’s a bizarre thing to say, especially in a project attempting to narrow the list, but there really are no wrong answers. Greatness isn’t a universal term and its interpretation is what makes sports conversation so much damn fun.

Below are the honorable mentions, the players that ascertained at least one vote but failed to garner enough pull to make the top 10.

In true testament to how difficult and subjective the project was, 11 fantastic players were only able to ascertain one vote. All in all, 30 different players had a season nominated, and of those 30 players, 53 unique seasons were selected.

The ballots of all 27 voters will be revealed in the final post of the series, but to sate your appetite temporarily, a few of the more unique choices are listed below, followed by the guys who just missed the cut.

Jones wrote, “Playing with the old Kansas City Kings, Archibald became the first—and only—player in NBA history to lead the league in scoring and assists, scoring 34 points a night. He also sold tickets and popcorn in the stands during timeouts. Kidding…I think.”

Termine had this to say: “In just his second year, at the young age of 22, Barry ended Wilt Chamberlain’s seven-year run as the League’s scoring champ. He averaged 35.6 PPG and led the Warriors to the Finals. Only Chamberlain and Michael Jordan ever averaged more points in a single season. The 40.8 PPG he averaged in the Finals that year are second only to Jordan vs. the Phoenix Suns in 1993.”

Davis is the youngest individual to receive a vote. The man to throw one his way? Keith Smith of RealGM.

Smith on Davis: “Davis put up the 12th best single season PER ever at age 21. He dominated on both ends, averaging 24 PPG, 10 RPG, and 2 APG with almost 3 BPG. At age 21. Only health can keep Davis from getting to this point or above again. And did I mention he was just 21?”

On his deep dive, Joseph had this to say: “The first season of the National Basketball Association might have been the weirdest, with teams like the Anderson Packers (who made the Semifinals!) and Tri-Cities Blackhawks still hanging around as vestiges of a previous era of pro basketball. But one thing was very obvious to everyone involved: George Mikan was absolutely unstoppable.

The Minneapolis center had huge leads in nearly every statistical category associated with big men, and his only rival was Alex Groza, a point shaver who soon would be banned from basketball. Mikan averaged 27.4 points a game and unquestionably was the league’s best rebounder as well, plus he posted an easily league-leading 21.1 Win Shares. Moreover, the Lakers went 11-1 in a five-round playoffs after a 51-17 regular season, which would project to 61.5 wins in an 82-game season. It’s tough to argue any player dominated the league for a season as thoroughly as Mikan did in the NBA’s inaugural year, setting the tone for decades of Lakers lore.”

Nash grabbed his assist from Coach Nick of BBallBreakdown.

Coach Nick had this to say on Nash: “Effectively revolutionizing the game and playing even better than his back-to-back MVP seasons, Nash turned in a 50/40/90 season for the ages, along with his career-high 11.6 assists per game. Unfortunately he was deprived of leading his team deep into the playoffs from untimely suspensions of teammates, but it doesn’t detract from just how great he was, both from a toughness standpoint and skill. Oh yeah, and he did this at age 32.”

Any list also means there are some tough cuts to make at the end. There have been many great individual seasons that had to be left off, but deserve some shine. The list includes a pair of MVP winners for their outstanding seasons, two centers who turned in career years in the same season, an unprecedented season triple-double and one of the biggest scoring seasons in the modern era of basketball. The five closest seasons from a player not to make the #HOOP10 are as follows:

As far as top 50 players ever go, Robinson might be the most underrated of the bunch. The coming of his protégé Tim Duncan gave Robinson and the Spurs such a huge lift, but it also socked his legacy some. Robinson was a physical specimen, a statistical monster, and as shown above, his 1993-94 season was truly astounding.

“Robinson led the League in scoring, PER, Win Shares, BPM and VORP. One of nine seasons in which a player topped 10 in both BPM and VORP.”—Andy Bailey

“Robinson’s peak campaign is forgotten by many but it was spectacular. At the age of 28, the Admiral averaged 29.8 points per game (on 57.7 percent true shooting) with a 30.7 PER, and Robinson put up 10.7 rebounds, 4.8 assists and 3.3 blocks per game. He is (rightly) overshadowed by Tim Duncan at this point, but this was an uber-elite performance.”—Brad Rowland

Losing to the Shaquille O’Neal and Kobe Bryant Lakers is nothing to be ashamed of. The 2004 Timberwolves were the one contending Minnesota team Garnett was a part of and he made the most of it. What didn’t he do during that playoff run, leading his team in PPG, RPG, APG and BPG over their run to the Conference Finals?

“This is my personal favorite basketball season ever. KG was absurdly good at pretty much everything. He put up 24/14/5 and led the team in points, rebounds, blocks and steals — and was significantly better on defense. For all the talk of the Kobe vs. Duncan era, I’m not sure either of them ever reached the talent peak of KG in Minnesota — but he always needed to play a bit more selfishly (how I’ve always felt about KD, too). Still, he led the Wolves to the only postseason series wins in franchise history… and their last playoffs to date.” – Brandon Anderson

“KG’s MVP season was the pinnacle of what made Garnett so good. He was still at his defensive peak, wreaking havoc both on the stat sheet and off, and his rebounding numbers combined with his assist numbers are pretty unprecedented. If that Wolves team stays healthy against the Lakers, it’s fascinating to wonder how different KG’s career trajectory could have been.” – Carter Rodriguez

The infamous season in which Bryant dropped an unforgettable 81 points – a bludgeoning that sent the Raptors back to extinction and embarrassed Jalen Rose for all of eternity. No Shaquille O’Neal, no problem – Bryant Smushed the team into his backpack and carried the Laker load all the way to the playoffs.

“Efficiency has never been Kobe’s strong suit, but a 28 PER and 15.3 win shares is pretty ridiculous for anyone. Doing so while surrounded by the likes of Kwame Brown, Brian Cook and Smush Parker is borderline miraculous. While many point to the 3-1 collapse (damn you, Tim Thomas), building that lead against Steve Nash’s Suns with that supporting cast was undeniably impressive. Again, though, damn you, Tim bleeping Thomas.” – Anthony Irwin

“Go ahead and send all your anti-chucking, PER-thumping (he was third in the league that year w/28.0, highest in usage), “I really just couldn’t stand the guy” vitriol my way. I’ll take it. Although it didn’t ultimately lead to much postseason success, Bryant absolutely unleashed one of the game’s most vicious offensive attacks (Bean also played lockdown defense back then) we’ve ever seen on a nightly basis for a Lakers squad that–putting it nicely–didn’t have a lot of talent.” – Jabari Davis

“It is an utter shame Kobe’s truly PRIME years were spent with Smush Parker and Kwame Brown. If he and Shaq could have worked it out I think they would have won eight titles.” – Robert Littal

One of the game’s most beloved stars missed #HOOP10 by the smallest of margins. Olajuwon’s 1993-94 season was special beyond the numbers: he led the Houston Rockets to their first-ever championship, and he did so without any other marquee player on the roster.

“Olajuwon’s 1993-94 ranks amongst the most improbable NBA championship runs in League history. Yes, the absence of Michael Jordan most certainly helps. What Hakeem Olajuwon did remains incredible. With a grand total of zero fellow Hall of Famers, Olajuwon led the Houston Rockets to the first championship in franchise history. He also won MVP, Finals MVP and Defensive Player of the Year. To date, Olajuwon is the only player in NBA history who has averaged at least 25.0 points, 11.0 rebounds, 3.5 assists, 3.5 blocks and 1.5 steals in a single season.” – Maxwell Ogden

“Who’s to say what would have happened had Michael Jordan been in the picture? We’ll never know if Chicago could have won a fourth championship in a row. What we do know, though, is how incredible Olajuwon was, as he became the only player to win MVP during both the regular season and playoffs, as well as Defensive Player of the Year.” – Christopher Walder

The triple-double season. No sophomore slump for Big O, he found a way to make it happen in all facets of the game. Unfortunately he turned up one vote shy of #HOOP10.

“He averaged 30.8 points, 12.5 boards and 11.4 assists. Robertson also went to the line 11.0 times per game, making 80.3 percent of those. This might not be the greatest season or even close to it, but averaging a triple-double with 30 points per game just had to be squeezed in here somehow.” – Michael Gallagher

“The Big O did something unthinkable today: he averaged a triple-double. We place such a high value on this stat, like a decathlon or the 40-40 club in baseball. It’s even crazier that Robertson nearly did it five times in his career. Yet the fact that Magic Johnson, Jason Kidd, LeBron James and Russell Westbrook haven’t touched this record says everything.” – Marc Griffin