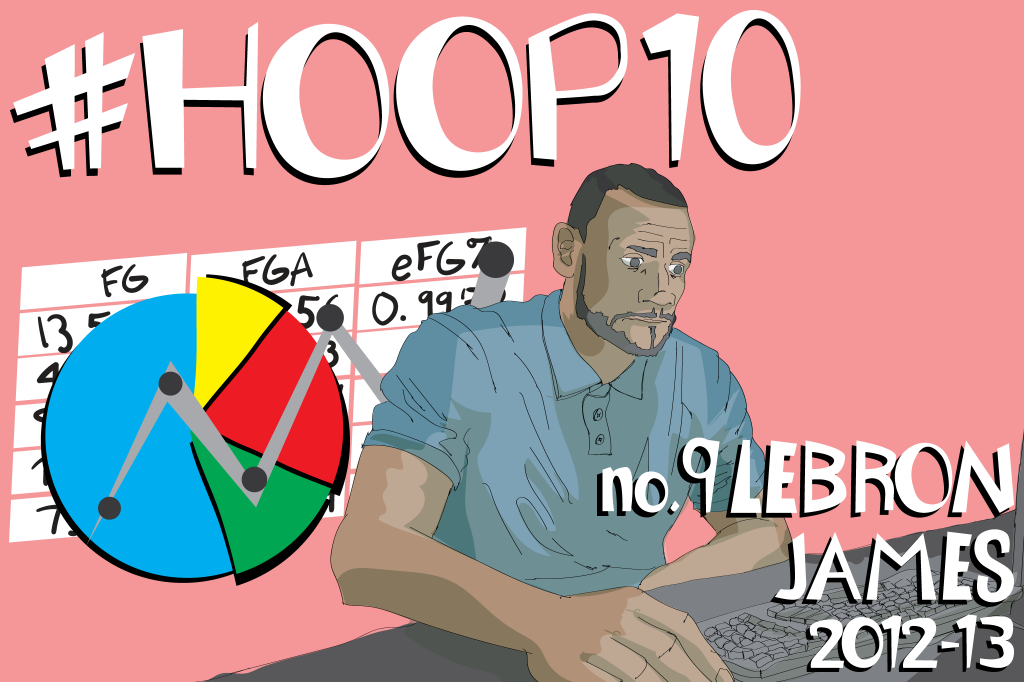 James has had a sensational career, but unfortunately, he’s often criticized to the extreme due to the avenues spectators now have, most of it rooted in his still-losing record in the Finals (3-4). That said, the 18-year-old “Chosen One” who entered the NBA playing for his hometown team has met every lofty expectation set in front of him. Ghost chasing is all he has left at this point.

If 2002-03 Tim Duncan is Wun Wun carrying the load for the wildlings, then James’ 2012-13 Hollywood comparable might be Darth Vader from The Empire Strikes Back. The Heat were rolling and James was their frontman, the villain many loved to hate. (Funny how that narrative has shifted again.)

While it’s hard to sort through so much greatness, we’ll try. Statistically, this is one of the best seasons of all time. James’ advanced numbers were off the charts (19.3 Win Shares, 9.8 Value Over Replacement Player, 31.6 PER), and viewed through the lens of traditional stats, his 26.8 PPG, 8 RPG and 7.3 APG were a worthy comparison to Oscar Robertson. And LeBron’s one hole throughout his career, his three-point shooting? In 2012-13, he shot a Curry-esque 41-percent from deep (still his career high) that left no hole in his game.

LeBron has had arguably better seasons—in 2008-09, he carried a Cavs team that had no business being a contender (the team’s second-best option was a career year by Mo Williams) into an NBA-best 66-win team—but 2012-13 LeBron was playing at maximum efficiency. It was LeBron, optimized. Every facet of his game was firing, and with that, he unlocked the full potential of the Miami Heat roster that had some folks thinking he might make good on the “not three, not four, not five, not six, not seven…” championships proclamation. He was the orchestrator who coalesced the orchestra to play as one—except in his case, he was also the band’s best player at every instrument.

Beyond the numbers, LeBron was every bit the leader. In his first year in South Beach, it was still Dwyane Wade’s team. After the first championship and Finals MVP, the Heat had become LeBron’s team, so 2012-13 was James’ first year as the team’s liege. The Heat responded in kind, cruising to a League-best 66 wins, which included a surreal 27-game win streak (Miami went 38-3 over their final half of the regular season).

Many players can get into a zone for a game or even a stretch of games. LeBron’s entire 2012-13 was spent in a zone. LeBron’s game was as calm and free as the waves lapping Biscayne Bay, his game flowing naturally through his teammates. It was also the convergence of LeBron’s physical peak with the height of his basketball intellect (which continues to grow), making for a deadly combination. Seemingly every LeBron movement was calculated and nothing was wasted; every jab step, ball fake and dribble executed led to a positive result for the team.

LeBron could’ve and should’ve been the first unanimous MVP in NBA history, but one single voter didn’t see it the same way. He would settle for merely matching Michael Jordan, Kareem Abdul-Jabbar, Bill Russell and Wilt Chamberlain as the only four-time MVP winners in NBA history.

In the playoffs, the Heat coasted early. Keep in mind, that’s despite the infamous Brandon Jennings prediction. The overzealous Jennings foresaw the Milwaukee Bucks upsetting the Heat winning in six games. In reality the Bucks lost in four. (Fun fact, the Heat won all four games by a minimum of 11 points.)

In the Eastern Semifinals, the Rose-less Chicago Bulls mustered one win before they were sent fishing. In the Conference Finals, the Indiana Pacers once again came to play, pushing the Heat to seven. In the 2012-13 postseason, the Heat would face three elimination games, one vs. Indiana and two vs. San Antonio. James in those games:

James may have needed a miracle shot (although because of James’ three-point accuracy that season, the Spurs had to respect the attempt and send two defenders to contest, leaving them thin for the defensive rebound, which set up Bosh’s offensive board and pass to Allen) to keep the dream alive, but he carried a load and filled out the stat sheet in a way that few if any else in history could’ve done.

“LeBron is maybe the greatest all-around player of all time, and in 2012-13 he was at maximum command of his powers. LeBron averaged 26.8 points, 7.3 assists and 8 rebounds playing a hybrid point power forward position. He shot 56.5 percent from the field, an unheard of percentage for a perimeter ballhandler. Historically, LeBron had struggled with an inconsistent jump shot, however in 2012-13, LeBron found a rhythm from outside. He shot 40.3 percent from three-point range, and 48 percent from long twos (one of the best in the League). Almost more important was his role on defense, guarding all five positions and being the key player who made their aggressive high trapping and switching defense work.

LeBron’s Miami Heat won 27 straight games (2nd longest streak of all time), a feat which would typically be the staple of a player’s season, however LeBron somehow topped it in the Finals. Down 3-2 in the series and trailing 13 points to the San Antonio Spurs late in the 3rd quarter of game 6, LeBron minus the headband led the charge. LeBron scored 18 of the Heat’s 32 points in the 4th quarter and was everywhere. LeBron finished Game 6 with 32 points, 11 assists and 10 rebounds. He somehow managed to top that with 37 points (12-23 from the field) and 12 rebounds in Game 7, including the game-clinching shots. To me, this was the signature season of one of the most uniquely gifted players of all time.”

“This season gets a slight edge over the others because he won the title. LeBron’s stats are still outrageous this season, posting a 27-8-7 line on a 64.0 true shooting percentage.”

“LeBron had other great statistical years, but this one felt the most unfair of any of them. His outside shot was never better than this—40 percent from distance on over three attempts was so insanely unfair. He also finished second this season in Defensive Player of the Year voting behind Marc Gasol, and was a genuine terror on that end. It wasn’t just chasedown blocks, but a total tour de force on that end. He was the engine that allowed Miami’s blitzing defense to function, with an ability to cover ground I’ve never seen before. Finally, his Heat defeated the Spurs in seven games in the best-played Finals I think that I’ll ever see.”

“With the pressure of winning a ring off his shoulder, LeBron put it all together for the Heat in 2012-13: leading Miami to a title repeat, winning his fourth MVP award, posting a career-best .322 WS/48 figure to go with a .640 True Shooting Percentage and career-best 40.6 percent shooting from downtown.”

Justin Rowan of Fear the Sword:

“LeBron’s second title came in the year where it felt like he broke the game in terms of efficiency. The counting stats are impressive enough, with only Michael Jordan, Oscar Robertson, Larry Bird and John Havlicek ever matching those point, rebound and assist totals in a single season. However, no player has ever put up those numbers while shooting so well from the floor. He even shot a career high 40.6 percent from behind the arc. James also won his fourth MVP, second Finals MVP and was First Team All-Defense.”

“LeBron’s efficiency hit an absurd level, as he shot 56.5 percent from the field on 17.8 shots per game. That’s the fourth-highest FG percentage of all time for a player who qualified for the three-point percentage leaderboard (behind another LeBron season and two Charles Barkley seasons). And oh, he shot 40.6 percent from three that year.”

“James may have enjoyed higher totals in some of the general counting numbers in other years, but 2012-13 was capped off with the second of his three titles and Finals MVP awards. He also captured that year’s regular season MVP award, led the League in field goals, shot his personal best from beyond the arc, and was on the All-NBA and All-Defensive first teams, all while leading the League in PER (31.6).”