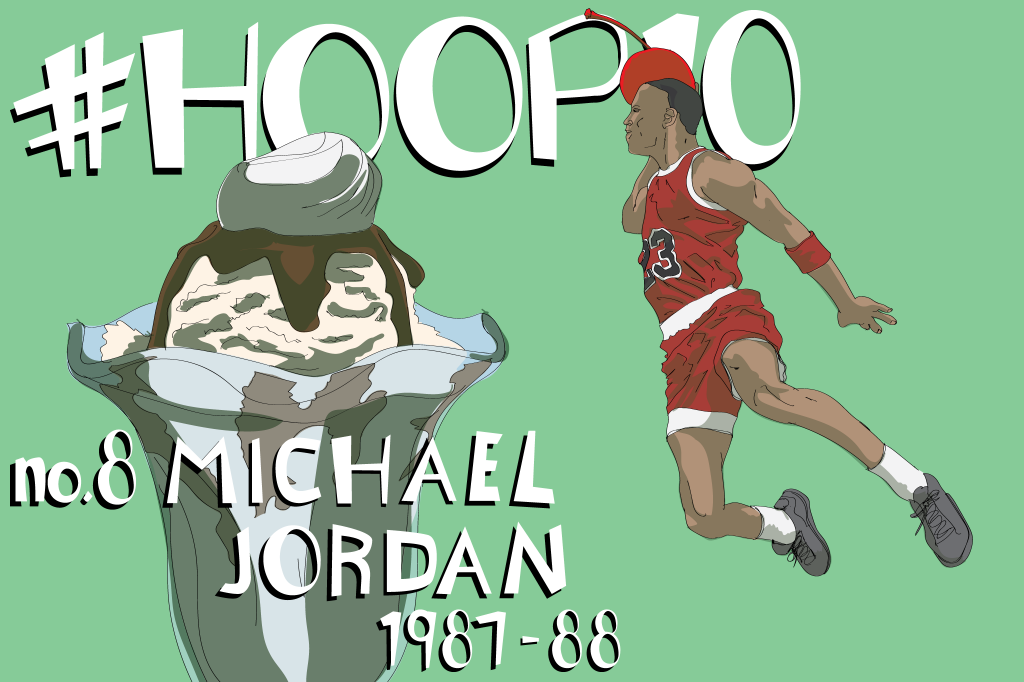 The statistical peak of the Jordan years is upon us. Before his three rings, a run at baseball, another three rings, 28 more Air Jordan releases and some bizarre time as a Washington Wizard there was 1987-88 Michael Jeffrey Jordan.

The 1987-88 season was the pinnacle of what Jordan could do for a team that was not yet ready to win it all. Seriously, aside from the title there’s little else he could’ve accomplished. The 1988 playoffs were the first of three straight years in which the Chicago Bulls would fall to the Detroit Pistons before eventually ascending to the throne in 1991.

By this point Jordan had already led the League in scoring (37.1 PPG in 1986-87), he’d already been an All-Star three times over and he was selected to the All-NBA First Team but this was the year he ran down the list of legacy boxes that needed checking. Jordan’s 1987-88 campaign is one big scream of, “Is there no one else?”

In 1987-88 Jordan led the League in scoring (35 PPG) and steals (3.2 SPG). He won the All-Star Game MVP and his Chicago Bulls had the third best record in the East (50-32). Jordan also became the first player ever to win both the MVP and Defensive Player of the Year Award (DPOY) in the same season (Hakeem Olajuwon would go on to repeat the feat in 1993-94). In an age where players are given a pass on defense if they play a large role on their team’s offense—ahem, looking at you, James Harden—Jordan was essentially 2015-16 Stephen Curry mashed together with Kawhi Leonard.

On top of the legacy feeding accolade boost, Jordan added to both his lore and to the myth of Air Jordan. All-Star 1988 was like Jordan’s own personal coming out party. In arguably the most iconic dunk contest of all time, Jordan took home the title, defeating Dominique Wilkins in a bout for the ages.

After the memorable Saturday showing at the Dunk Contest, Jordan had every reason to ease up for the All-Star Game the following day. But this is Jordan, which meant when he walked into that locker room—one that featured the likes of  Magic Johnson, Larry Bird, Isiah Thomas, Moses Malone, Charles Barkley, Karl Malone, Hakeem Olajuwon, Wilkins, and more—Jordan was out to prove. Despite the legendary prowess of the event—the game featured 15 would-be Hall of Famers—it was Jordan who left with the All-Star MVP carrying the East to a win behind a cool 40-point showing.

Jordan finished the season with a 31.7 PER, which ended up being the best of his career, the highest PER since the three-point era and the third-highest mark after Wilt Chamberlain’s insane two-year run from 1961-1963.  He also headed to the playoffs with 21.2 WS, which also wound up being a career high. His 11.81 VORP that season still remains the second highest of all time (behind his own 11.98 he notched the following season).

Jordan and the Bulls drew the fledgling Cleveland Cavaliers (42-40 in 1987-88, the Cavs would go on to improve to 57 wins the next season) in the First Round of the playoffs and the Cavs guarded Jordan as well as the Raptors did Kobe Bryant on January 22, 2006. Jordan racked up 50, 55, 38, 44, and 39 points in the series to dispatch the Cavaliers in five games. However, the Detroit Pistons were another story.

While Jordan abused the Cavaliers at his leisure, the Pistons tamed His Airness and sent Bulls packing. Jordan also shot significantly worse at the free throw line vs. the Pistons falling from 92 percent vs. Cleveland to 79 percent vs. Detroit. Nothing was easy vs. the Bad Boys. Yes, the “Jordan Rules” slowed MJ down. But even “shackled” by the Pistons’ smothering D, Jordan’s numbers would still be career moments for anyone else, that’s how money Jordan was that year.

It would be a few years before Gatorade would drop the famous “Be Like Mike” commercial, but even in 1987-88, Mike already had the world wanting to be like him.

“Pick any year from about 1987-93, anyone you want. That’s how insane Jordan was. He had about a six-year span that easily could infiltrate this top 10. I’m going with 1987-88 at No. 1. He averaged 35 a night, which isn’t even his best output of the six years. But in this season, Jordan was the NBA’s Defensive Player of the Year. He was the League’s MVP. He was the scoring leader and steals leader. The guy was simply insanity.”

“Michael Jordan was the Defensive Player of the Year in this campaign, and given how incredible he was offensively, that says it all. Jordan led the League in scoring and steals while playing more than 40 minutes per night and appearing in every contest. At 24, he was at the top of his athletic performance from a physicality standpoint, and if we are nitpicking, this may have been his best two-way production. There are a number of performances worthy of top honors, but Jordan’s 1987-1988 showing was top-notch. “

“Just think about this … Jordan led the League in scoring while also winning the Defensive Player of the Year Award. My goodness.”

“Jordan’s 1987-88 season was so dominant he’s the only guy since to win the MVP award without his team finishing top two in the conference…  Jordan averaged 35-5-6 with third best PER of all time trailing only a couple years from Wilt Chamberlain. Many forget but what makes this MVP even more special is who he won it over. Larry Bird might’ve had his own career year averaging 30-9-6 and that’s while shooting 50-40-90 percentages.”

“Spoiler: Jordan will appear on my personal list more than once. But his accomplishments during the 1987-88 season need to come first. He may not have won a championship at this point, but he still had one heck of a year. For starters, he was the only player to win both a defensive and scoring award, in the same season. After averaging 35 points, 5.5 rebounds, 5.9 assists and 3.2 steals a game, Jordan won Most Valuable Player, Defensive Player of the Year and All-Star Game Most Valuable Player. Additionally, he led the League in scoring and in steals, as well as was crowned the Slam Dunk Contest champion. This may have been only the start for Jordan, but it is still a time period worth noting.”

“Emphasis on best individual season, as MJ was much more an individual early in his career than the champion he ultimately became. MJ was the best on both ends of the court in 1987–88, the only player in history to win Defensive POY along with the scoring title. He also won both the MVP and All Star Game MVP as well as the dunk contest, featuring the iconic free throw line jam. MJ put up an awesome 35/5.5/6/3/1.5 line that season, the most win shares by a non-center, #2 BPM and VORP all time (behind his following year). Jordan had a 60 percent true shooting season, especially impressive considering he made only seven triples. The Bulls lost to the Pistons in the playoffs but it wasn’t MJ’s fault — he matched his season line including the only player ever to record back-to-back 50-point playoff games. Only Wilt, Iverson, and West even have 2+ 50-point playoff games in their career. And by the way, I’d listen to an argument for about seven other MJ seasons. GOAT.”

“Jordan had at least six seasons that were given serious consideration for this list, and while the League was very aware of his skills over his first couple years, he put the world on notice by absolutely obliterating any and all challengers in 1987-88. He didn’t win a title that year, but he did bring home the regular season MVP and DPOY awards, was on the first teams for All-NBA and Defensive players, won the All-Star Game MVP and Dunk Contest, and just so happened to lead the League in scoring and steals for good measure.”