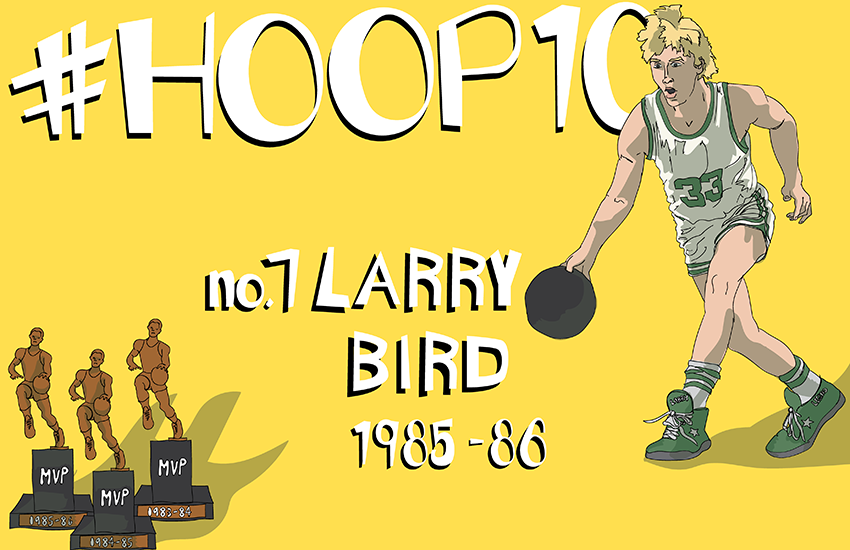 The legend of Larry Bird was at its pinnacle, the Hick from French Lick had surpassed all expectation. The Indiana product was fierce, he was lethal and he was a sniper unlike the League had ever seen.

To this day Bird’s combination of size, shooting, playmaking, and rarely mentioned athleticism might be unmatched. Certainly not by a white American-born superstar. Bird become an anomaly, a rarity, and his 1985-86 season was the knockout punch that cemented him as one of the game’s true GOATs.

Bird continued to stand out amidst the League’s most competitive era of basketball. How many players have won three MVP awards? The answer is nine if you were struggling: Kareem Abdul-Jabbar (6), Michael Jordan (5), Bill Russell (5), Wilt Chamberlain (4), LeBron James (4), Bird (3), Magic Johnson (3), and Moses Malone (3).

How many players won three consecutively? Well that lonely and elite list rolls down to three. Russell from 1961-63, Chamberlain from 66-68, and Bird from 84-86.

For all the talk about the great rivalry between Bird and Magic in the ’80s, it was dominated by Bird in the middle of the decade. During that three-season run, Bird’s Celtics won more games than Magic’s Lakers (192-178) and more championships (2-1). It’s unfair to compare Magic and Bird based on numbers as both meant so much to their respective teams beyond statistical measurement. When they were on the floor, the Celtics and Lakers were good locks to win. By that measure, Bird was more valuable during the 1984-1986 run, appearing in 241 of the possible 246 games while Magic played in 216.

The last of the Bird MVP trilogy was Bird at his finest. His standard numbers, which his MVP was measured by at the time, were 25.8 PPG, 9.8 RPG, 6.8 APG and 2 SPG. A deeper dive into modern stats and you’d see that Bird deserved every bit of the MVP threepeat. He led the League in Win Shares (15.8), Player Efficiency Rating  (25.6) and Value Over Replacement Player (8.7). He even took home the trophy for the NBA’s inaugural Three-Point Contest.

In fact, the 1986 season was Bird’s sixth consecutive season finishing top two in the MVP voting, and what made this year so special was how dominant the Boston Celtics were. The Celtics won 67 games, the second highest total of the NBA’s most storied franchise.

Bird’s cocksure demeanor spread across the roster like fire, giving the Celtics an air of invincibility. If the 1985-86 Celtics team played today, they’d be up there with the 2011 Miami Heat and this year’s Golden State Warriors as a loathed team. There was no “Midwest nice” to be found from Bird. He’d beat you and let you know all about while doing so.

Bird was a menace all year long in 1985-86. He recorded 10 triple-doubles all of which resulted in wins. The monster stat lines were highlighted by a 47-point, 14-rebound, and 11-assist win against the Portland Trail Blazers in an overtime thriller. And that was just the regular season.

Prior to the Finals the Celtics lost all of one game in the playoffs and it took 37 points from Dominique Wilkins to chalk up their singular setback. The Celtics path to the Finals included a sweep of the still ripening Chicago Bulls in the First Round, and that’s despite a playoff record 63 points from Michael Jordan in Game 2.

In the Finals Bird re-defined the words, fine form. Larry Legend averaged, for all intents and purposes, a triple-double. Hakeem Olajuwon and the Houston Rockets were formidable opponents but 24 PPG, 9.7 RPG, and 9.5 APG from the man of this hour were a heavy counter, too heavy for a 23-year-old Olajuwon.

The 1986 Championship would be the last of Bird’s career and while it wasn’t the end of his magic, it was the perfect podium for his greatness.

“There is something leprechaunic about averaging 25.8 points, 9.8 boards, 6.8 assists and .896 percent from charity stripe. Larry was that close to the 50-40- 90 club. But the numbers didn’t matter much in 1986, the Celtics mopped up the League that year, going 40-1 at home. They survived a playoff opus from god disguised as Michael Jordan, and Larry Legend garnered both MVP honors, to go along with his third and final ring.”

“The following year may have been even better from a statistical standpoint, but the fact that his Celtics won the ring and he was ultimately the Finals MVP put this season over the top for Bird. Bird also took both MVP awards, was First Team All-NBA, and won the All-Star Three-Point Shooting contest for good measure.”

“The 1986 Celtics have an argument as the best team of all-time and Larry Legend was the head of the snake. His Ruseell Westbrook-ian statistics stats in the 1986 Finals (24 PPG, 9.7 RPG, 9.5 AG) capped his best season.”

“Larry Bird has gone down as one of the most gifted all-around players of all time.  In 1985-86, Bird led the Celtics in points, rebounds, assists and steals. His eventual world champion 1986 Celtics won 67 games (second most all-time at the time). Bird’s all-around brilliance was on display in the 1986 Finals to cap off his historic season. Bird finished with 24.0 points, 9.7 rebounds, 9.5 assists and 2.7 steals per game in the finals, just 2 rebounds and 3 assists shy of averaging a triple-double.”

“The best team in Celtics history and, in my opinion, one of the three greatest teams in NBA history was led by Bird at his very best—he set career highs in Win Shares, BPM and VORP en route to taking 73 of 78 first-place MVP votes. That 25.8 points, 9.8 rebounds and 6.8 assists per game line was pretty, too. But what really stands out about this season was that it represented a major leap in three-point attempts for Bird. He jumped from 52 attempts in 1981-82 to 77 in 1982-83 to 131 in 1984-85, but the key leap was up to a League-leading 194 in 1985-86, while making 42.3 percent. The Celtics went 67-15 and 15-3 in the postseason, though they avoided a rematch with the Lakers in the Finals. Because Bird was so consistent, many remember this Celtics team being the one with Bill Walton as Sixth Man of the Year. Walton was important. Bird was surreal.”

“Averaging 25.8 PPG, 9.8 RPG, and 6.8 APG, this was hardly Bird’s best statistical season. But Bird was the team’s best player on what I consider the best team all-time amid the game’s toughest era of basketball. Bird also won his third straight MVP, capping off a record 67-15 season, with what he called his greatest game. A 29 point, 11 rebound, 11 assist triple-double in game six of the NBA Finals against the Houston Rockets.”

“Larry Bird is one of the greatest scorers of all-time. Bird was also the type of player who could dominate a game without putting up a shot. His basketball IQ ranks amongst the best ever, his creativity had even the best of athletes in awe, and his fundamentals were as polished as they come. In 1985-86, Bird pieced together his best season. Bird paired a championship and the Finals MVP award with his third consecutive regular season MVP. He had better statistical years, but this was pure greatness in the face of incomparable pressure.”

“Bird also had better statistical years, but closed the 1986 season winning his 3rd straight MVP award, Finals MVP and his last NBA championship. In addition, he was the lead guy on a team many consider to be the best in NBA history. Bird was so good this year that he would play entire portions of games left-handed to challenge himself. If that isn’t top 10 worthy, you tell me what is.”