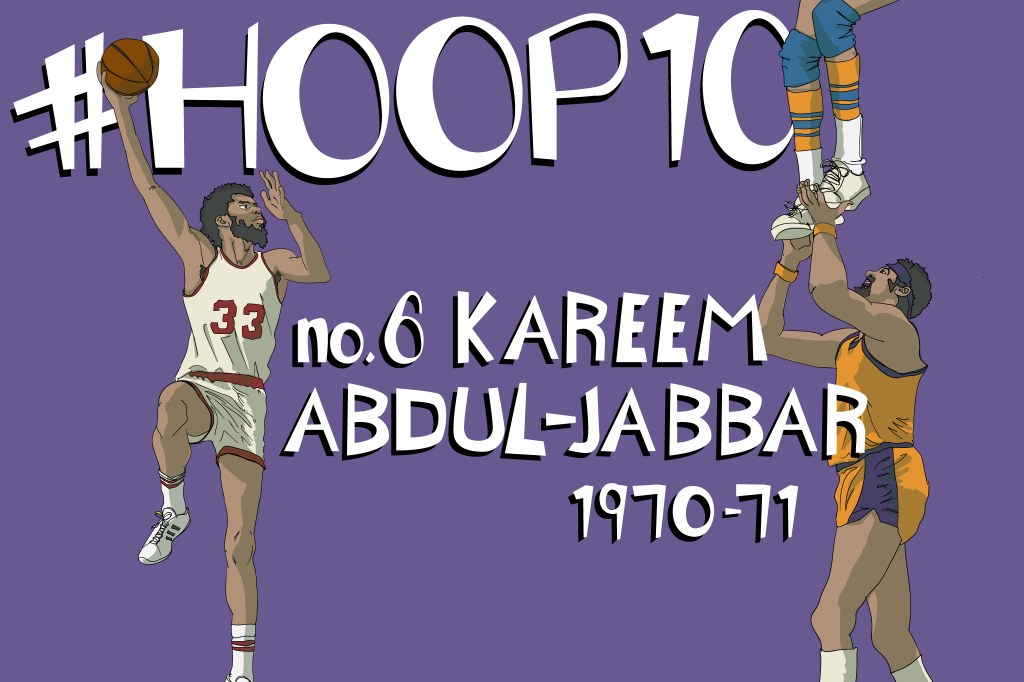 To this day, the player formerly known as Ferdinand Lewis Alcindor Jr. might’ve been the only player ever, to be the best player in the League the moment he stepped out onto the hardwood. Kareem Abdul-Jabbar probably could’ve averaged a double-double coming out of Power Memorial High School in New York had he decided not to dominate the college game for four years (he averaged 26.4 PPG and 15.5 RPG in his four years at UCLA, where he took the Bruins to a 88-2 record [Ed note: Kareem played his freshman year on the JV squad as all freshman did in those days] and won three NCAA titles).

The no-brainer No. 1 pick in the 1969 NBA Draft by the Milwaukee Bucks (it wasn’t without a bidding war as the Harlem Globetrotters and the ABA’s New York Nets were vying for his services), Abdul-Jabbar was expected by all to take the title of dominant big man from Wilt Chamberlain, who was 10 years into his NBA career.

Abdul-Jabbar didn’t disappoint in his NBA debut. He averaged 28.8 PPG, 14.5 RPG, 4.1 APG, came third in the MVP voting and led the Bucks to 56 wins. The 56 wins were a monumental improvement from the year previous, in fact, it was a 29-game jump. What’s even more remarkable is that Abdul-Jabbar’s rookie season isn’t the season that got voted in, it’d be his sophomore campaign.

Most second-year players are still finding their feet, they are settling into their roles, taking on more responsibility, but not Abdul-Jabbar. He was already the main attraction, the man of the hour. In year two he erupted on the Association: 31.7 PPG, 16.1 RPG, 3.3 APG, with a 29 PER, and .606 True Shooting Percentage. He dominated the MVP race, was selected to the All-NBA First Team (after a Second Team finish in his rookie year) and repeated his place on the All-Defensive Second Team, while adding in the Finals MVP and NBA Championship for good measure.

This was all aided by Abdul-Jabbar’s devastating skyhook—a sweeping shot with a release perpendicular to your body which allowed your off arm and body to create space between shooter and defender—a shot he didn’t invent (it was long used in the game) but he made synonymous with his career. Abdul-Jabbar developed the shot early on as a fifth-grader going up against bigger and older opponents—”It was the only shot I could shoot that didn’t get smashed back in my face. So I learned to rely on it early, and it was always something that I could get off, even in traffic,” he recalls—and he really honed it in college at a time when the NCAA barred dunks. In addition to his already huge advantage of his 7-2 height that made the shot virtually unblockable, Abdul-Jabbar had the audacity to be just as adept with his left or right hand with the shot, with range up to 12 feet with it. It’s tough to say how many of his NBA-record points came from the skyhook or how accurate he made them, but the 38,387 career points and .559 career shooting are testaments to his reliability and durability.

A quarter century later, the 66 wins are still a Bucks franchise record (they also notched a 20-game win streak that stood as an NBA record for a while), the 1971 Championship still the lone placeholder in the Bucks trophy case. Kevin Durant may have taught us that legacies are not fixed, no matter how great you are individually. Abdul-Jabbar brought a title to a team that never had one previously and hasn’t had one since and that’s forever. He also went on to win a few more titles with another team but will save that for another day.

The Over and Back NBA Podcast is doing a great job casting some light on the intrigue and rapidly changing era of basketball that was the 1970s, a recent episode paid some tribute to this exact season from Abdul-Jabbar. It’s a historical run from a numbers perspective and Abdul-Jabbar’s youth just adds an extra layer of spice.

The 66-win Bucks took care of Nate Thurmond and the San Francisco Warriors in the First Round, but that was just the warmup.

Though the great Bill Russell had left the game, there was still one name that still registered with fan bases: Wilt. Standing in the way of Abdul-Jabbar and the Bucks were Chamberlain and the Lakers. The unlucky Lakers—they had been the runner-ups in the Finals seven times out of the past nine seasons heading into 1971—might’ve been the underdog No. 2 seed that year, but fielded a Hall of Fame-filled roster in Chamberlain, Jerry West, Gail Goodrich and Elgin Baylor (who missed almost all of the season due to injury) that has played plenty of big games, but the Bucks didn’t give a damn.

Abdul-Jabbar and the boys took care of business, a quick five game series before moving onto the Finals. Abdul-Jabbar bested Thurmond round one, Chamberlain round two, and the Bucks made it a clean sweep against Wes Unseld and the Baltimore Bullets in the finals.

Abdul-Jabbar had fairy tale longevity, and he produced numerous seasons that could’ve made this list. But no other season holds the distinct bookmark in history the 1970-71 season did. It will always be a special year for fans of NBA lore and patrons of Milwaukee. Abdul-Jabbar started the game a legend and never ever was he a lost boy.

Chris Walder of The Score:

“By most measures, the man we now know as Kareem Abdul-Jabbar was the best player in the NBA from essentially his very first game. Then he took another step forward in his second season, thanks in no small part to the Bucks’ addition of Oscar Robertson and the improvements of Bob Dandridge, who also was drafted in 1969. Alcindor put up an obscene 22.3 Win Shares, the fifth-most ever but the most by a player whose team went on to win the championship, and the Bucks were historically great at 66-16 and running through the playoffs 12-2. Changing his name immediately after the championship clincher, Abdul-Jabbar had an even better regular season in 1971-72, but the Bucks lost to the Lakers in the Western Conference finals.”

“Kareem was absolutely demolishing the league with the Milwaukee Bucks to start the ’70s, but in ’71 he won his first NBA Championship, vaulting this season up the ranks of the many impressive seasons he accumulated throughout his career. This was just his second year in the league and while his third season was statistically superior, winning his first title, MVP, Finals MVP, leading the League in scoring and making Second Team All-Defense makes this season stand out.”

“This was only Kareem’s second year in the League, but probably his most statistically dominant. Also, it shows you how much further along the development curve four-year seniors that are also insanely talented were. Don’t take this as an endorsement of forcing kids to stay longer in college, but it is super interesting to imagine how good LeBron might have been out of the gate after four years.

The Bucks won Kareem’s first title this season after the addition of
Oscar Robertson in the offseason. These numbers are very much inflated by pace. This Bucks team had a pace of 113.4. The Warriors this season only averaged 99.3 possessions per game, per Basketball Reference’s metric, which explains his insane
rebounding numbers and “only” very good rebound rate.”

Tommy Dee of SNY and FanSided:

“What more could you ask for? 1970-71- NBA Champion, NBA Finals MVP, First Team All-NBA, first in PPG, third in total rebounds, 29.0 PER (1), second in True Shooting Percentage, and first in Win Shares.

“The numbers, the awards, the team success is all there. The lack of defensive stats dropped him slightly on the list but also at this point… not everyone can be top five. I also feel like if I would have witnessed this season with my own eyes it might have been higher up on my list but it’s hard to deny the consistency in which he played and the numbers he put up.”

“The NBA’s all-time leading scorer put together arguably his best individual season during his sophomore campaign leading the Bucks to the championship.”

“Abdul-Jabbar had a tremendous 1970-71. He averaged 31.7 points, 16 rebounds and 3.3 assists a game, he led the League in scoring, and took Most Valuable Player. Additionally, he went on to win his first title, and be made Finals MVP as well. Oh, and he led the NBA in PER by the second biggest margin in history… no biggie, right? It should also be noted that at this point, Abdul-Jabbar was only a sophomore. Talk about starting things off on the right foot.”