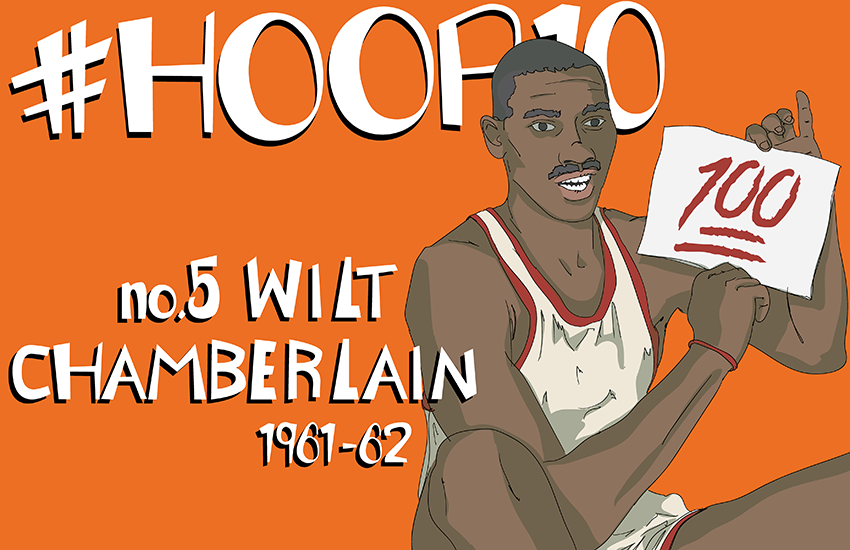 Wilt Chamberlain is the most dominant player on this list. The logic? He’s the only guy to make an appearance without winning the MVP or the championship in his blockbuster season, a natural byproduct of being great over a year.

Let’s just talk about 1961-62 for a second. It was one of the most competitive years ever for the MVP. Seven players received first-place votes for MVP that year. Four players from 1961-62 received at least one vote from the #HOOP10 panel. We’re talking about a season that most of the panel never saw a lick of and still had locked tightly in their sights.

Oscar Robertson, who finished 11th on this list, came in third in the MVP vote, Chamberlain came in second, and of course Bill Russell came in first.

Yes, pace is a factor and the era was arguably weaker, but Chamberlain averaged 50.4 PPG, 25.7 RPG, and 2.4 APG. Let that sink in for a bit: 50.4 PPG. Steph Curry would have had to average about seven more threes per game last year to match Wilt’s 50 that season. LeBron would have had to double his scoring output last year to get on Wilt’s level. During Kobe Bryant’s highest scoring season in 2005-06 when he put up 35.4 PPG (and dropped 81 against the Raptors), he would’ve needed about 15 more 81-point games to average 50 PPG. Wilt was putting up NBA 2K numbers on the League. He had 45 games where he topped 50. He had 15 games with 60-plus points. His low outing of the year was a woeful 26-point showing, and that took place against defensive genius Russell and the perennial champion Boston Celtics.

Of course Chamberlain famously set the NBA’s all-time single-game scoring record that season. It occurred on December 8, 1961 when he dropped 78 against the Los Angeles Lakers. Little did anyone know that he would break that short-lived record a few months later. One of the greatest gifts given to the fans of this game was Wilt’s 100-point masterpiece. The sad part of that the game was that it was only witnessed by about 4,000 fans since the NBA was still struggling to gain traction in its early days and the “home” game was played 85 miles outside of Philadelphia in Hershey, PA. The New York Knicks faithful might not treasure it quite as much as the rest of us but the Big Dipper dropped 100 points on their head. He played 48 minutes and grabbed a largely ignored 25 rebounds that night. All anyone remembers in that game was the magical and round number of 100, captured succinctly by a photographer: a postgame Chamberlain holding up a handwritten “100” on a piece of paper (the brainchild of Philadelphia’s legendary statistician Harvey Pollack). As amazing as Wilt’s 1961-62 50.1 PPG season was, on that night, he actually doubled that output.

Further adding to the legend of that game was that Chamberlain was allegedly hungover and playing on little to no sleep after a long night out the previous night. Framed in today’s world of “vids or pics or it didn’t happen,” Wilt’s 100 was a figment of imagination. There was no video of it, and outside of the famous postgame photo, no images from the affair. The other indisputable fact to the record-setting performance: Chamberlain, a career .511 shooter from the free throw line, made 28 of 32 freebies as the Knicks resorted to hacking him to try to stop him. Chamberlain’s 88 percent night from the charity stripe might be as impressive as the 100.

Sure, the Warriors went out of their way to help Wilt notch 100. After Chamberlain went into halftime with 41 points, his teammates decided to force-feed the big man to make history. The 7-1 Chamberlain also had the advantage of going up against an undersized Knicks frontline (center Darrall Imhoff, at 6-10, was the team’s tallest player) and was just physically ahead of his time. But even a gifted scorer like Kevin Durant in a zone and with his team calling his number every time would struggle to hit 100.

Points and rebounds aside—Wilt’s 2,052 total rebounds that season is still the second-most all-time (Wilt notched 2,149 the year before)—Chamberlain was easily the most dominant player that year. Blocks weren’t tallied at the time, which is an utter shame (imagine all those ignored triple-doubles unregistered that season). Chamberlain put up the second-best Player Efficiency Rating that year with 31.74 (his 31.82 the following season remains No. 1), he was worth 23.1 Win Shares and he played an NBA-record 3,882 minutes (out of a possible 3,890) while averaging 48.5 minutes per game (yes, it was still 48 minutes per game then) while burning both ends of the candle.

If the Philadelphia Warriors hadn’t fallen to the Boston Celtics in the second-round this season they could easily have been No. 1. Chamberlain and the Warriors did what they could, they took the series to seven, but Russell and the stacked Celtics again proved that the better team will always prevail against the superior individual.

From a raw output perspective, we will likely never see totals anywhere near what Chamberlain posted in 1961-62. The context is important, but treasure the year nonetheless, once in a lifetime is just that.

“I am not going to use duplicates (just the best season from each player) because if I used duplicates 1-10 would be Wilt.  How great was Wilt’s 1962 season? He is only player in the NBA to average over 50 points a game, he is also the only person to average over 40, the gap between his best scoring season and next best player is 12 full points a game. Nothing else needs to be said.”

“No matter the era, a player averaging 50.4 points and 25.7 rebounds per game is incomparable. And yet, those averages aren’t even the most impressive aspect of Chamberlain’s season. He played an average of 48.5 minutes per game. Chamberlain played all but eight minutes that year. That level of dominance and physical stamina may never been duplicated.”

“Much like Abdul-Jabbar, we could probably list about five Chamberlain seasons here, but let’s go with the epic statistical campaign. The super-athletic 7-footer averaged (yes, averaged) 50.4 points and 25.7 rebounds per game during this particular season, and Chamberlain basically led the league in every statistical category outside of assists. It is tough to translate this type of craziness from a numbers standpoint, but everyone can agree just how dominant Chamberlain was.”

“While Robertson was averaging a triple-double, Chamberlain was putting together the greatest scoring season of all time. He averaged 50.4 PPG, which is a mark that is unlikely to be challenged any time soon. In addition, he grabbed 25.7 RPG. If that isn’t enough he averaged 48.5 minutes per game. That is pretty hard to do when a regulation game lasts only 48 minutes total. Oh, and he scored 100 points in a game this year, too.”

“Sooooo, Wilt averaged 50 a night this year, and we could mean points, or we could mean…ah never mind…..I think we mean points. This must’ve been an awesome year to be alive for b-ball. Imagine if twitter was a thing, with Wilt and Oscar balling out.”

“As with Kareem, I legitimately pondered whether to include seasons that took place before the three-point line. The game was simply too different, not only with how it was played (rules, systems, etc.) but by whom it was played. There simply weren’t athletes to challenge guys like Wilt. All that said, any year featuring 50 points and 25 rebounds per game bears mentioning when listing the greatest seasons ever.”

“This guy averaged over 50 points a game, including a 100 point all timer. You cannot fault a guy for the year he was born, you can only judge him how he did on the court in his era—and this guy was as fast as a guard and taller than everyone, tremendous skill and athletic ability. He’d dominate in today’s game, too.”

“Yes, the era was much easier to dominate, but scoring 50.4 points per game is just absurd.”