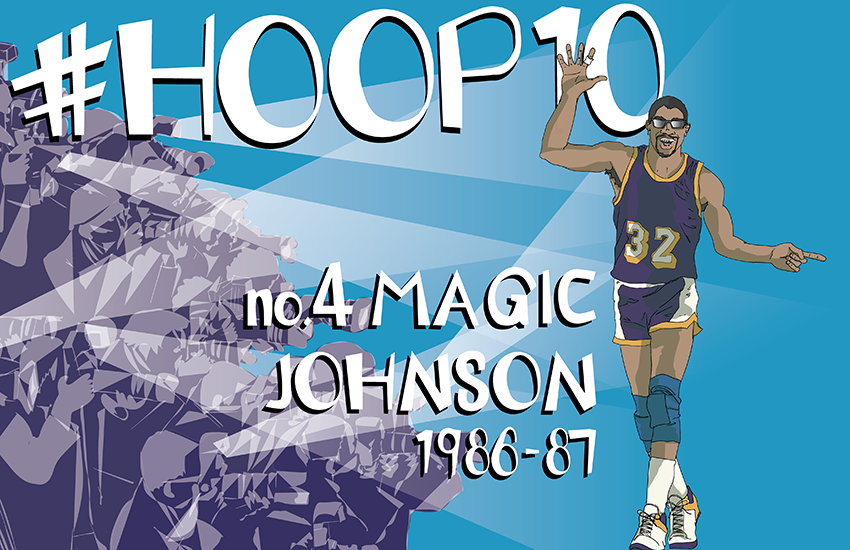 The late ’80s were chock full of amazing basketball, the proof is very visible in this project as Johnson’s 1986-87 campaign completes a three-year run, sliding right between Bird’s 1985-86 campaign and Michael Jordan’s 1987-88 campaign, both already having made appearances. When folks say Magic and Bird owned the decade before giving way to Jordan at the end, it’s not a metaphor.

Some context is needed to truly understand just how big Johnson’s 1986-87 season would become. Johnson was the unquestioned leader on arguably the greatest team of all-time.

The 1986-87 Lakers were disgustingly good, that isn’t news to anyone, but it wasn’t just regurgitated Hollywood hype. Showtime was so good, they even had enemies from Boston convinced. Cedric Maxwell, who wore green during two Celtics title runs in 1981 (where he was named Finals MVP) and 1984 and played alongside Larry Legend, was asked about the greatest team ever assembled. Maxwell chose Magic and the 1987 Lakers.

Off the court the Showtime Lakers weren’t just a team but a movement, not just entertainment but the lifeblood of Inglewood. The Forum was a world renowned venue and the Showtime Lakers set the world on fire every time they stepped onto the hardwood. As much TV and motion pictures the city churned out, there was no better entertainment option than a Lakers game in the ’80s. Before the days of Instagram and Snapchat, being seen at a Lakers game was the equivalent of 100K likes. The fast-paced Lakers quarterbacked by the smiling Johnson greatly exceeded the word fun.

A brief pause for those who didn’t live through the ’80s. Remember how much fun the Mike D’Antoni and Steve Nash captained Phoenix Suns of the mid ’00s were? Now imagine if those Suns played defense and won championships. You start to get an idea of just how magical the Magic-led Showtime Lakers were.

To this point Magic and Bird had won three titles a piece and both did their part in bringing the Finals from tape delay to prime-time placement. Entering the 1986-87 season, Bird and the Celtics sent the Lakers home in 1984, Magic repaid the favor in 1985, and the Celtics won the title in 1986 after the Lakers failed to advance passed the Houston Rockets. The 1987 Finals was the rubber match between the glitz and glam of L.A. headlined by Magic and blue collar Boston led by Bird. Little did we know it’d be the last time the two icons would go head-up in the Finals.

While titles were knotted up, the accolades were heavily favoring Bird. Johnson had never won the MVP award, while his rival had just won his third straight. This was the year the tables really turned for Johnson. Johnson won his first MVP award handily over both a young Jordan and peak Bird. Keep in mind this was a year Jordan went absolutely bonkers, averaging 37.1 PPG, the most by a player ever not named Wilt Chamberlain, and Bird turned in a season that was possibly better than his MVP season from a year ago with 28.1 PPG, 9.2 RPG, 7.6 APG and 26.4 PER. Magic was certainly an MVP among MVPs in 1987.

The Los Angeles Lakers weren’t playing around and 1986-87 didn’t have Johnson playing for second. The Finals crept up and it was a biggie, maybe the biggest Finals to date in NBA history. There was no doubt Bird and Magic were considered the two premier players in the League leading the two most storied franchises with a collision course in the Finals to determine who would take the championship belt.

Thankfully both Bird and Johnson answered the call. The 1987 Finals admitted two covetous heroes but only one got to leave with the tiebreaker in tow.

Johnson and the Lakers fresh off a steaming 65 wins (the most of the Showtime era) plunged into the playoffs uprooting their first three opponents. The Lakers only lost one game prior to the Finals and it took a show-stopping 51 points from the Golden State Warriors’ Sleepy Floyd.

Bird’s Celtics started out well enough with the three-game sweep in the First Round (they were a best-of-five format then) of the Chicago Bulls but then it took them the full seven games to get past the Milwaukee Bucks. That was followed by another full seven games to fend off a Detroit Pistons team that was on the cusp of the Finals (the Pistons would take down the Celtics the following year, effectively ending the ’80s Boston dynasty), a series win that required the miraculous Bird steal in Game 5.

Johnson wasn’t messing around. In the first two games of the Finals, he averaged 25.5 PPG, 16.5 APG, 6.5 RPG, and shot 55 percent from the floor. Dude was a bonafide NBA 2K cheat code. No I’m not accidentally reading fabricated 2K numbers, Johnson a bonafide cheat code, his dimes made of gold.

The next three games were in Boston, a problem for Magic and company because the Celtics were a sickening 79-3 at home over the past two regular seasons. After Johnson’s cataclysmic play in Games 1 and 2 where the Lakers won both by an average of 17 points, the Celtics were able to slow down the rest of the team if not Magic (Johnson had a near-triple-double of 32 points, 11 rebounds and 9 assists) in the Game 3 win. Not wanting the Celtics to gain the momentum advantage, the Lakers found themselves down 106-105 with seven seconds left in the game. It came down to one junior hook shot and a whole lot of Magic.

If Johnson had missed the series would’ve been knotted at two-a-piece with one more game slotted in Boston, but instead it became a 3-1 series chokehold on their bitter rivals. The Lakers would wind up winning the series 4-2, but the series was truly sealed that night in Boston. With just two seconds left it was Johnson’s right handed hook that swung not just a Finals but the best rivalry to date in sports as it also broke the tie of rings between himself and Bird (Johnson would win one more).

“Magic was the League’s most unique combination of size, agility and playmaking the League had ever seen during his prime years throughout the ’80s, and 1986-87 was the year where he was finally able to redeem himself for a difficult showing against the rival Celtics just two years prior. Beyond winning the regular season and Finals MVP awards, Johnson also led the League in assists, was first team All-NBA and hit one of the most memorable shots (“Baby Skyhook”) in Finals history.”

“Magic Johnson was never better than in 1986-87. A declining Kareem Abdul-Jabbar meant Johnson fully took control of his Lakers, and after three Championships it would have been understandable if he took a step back. He set a career high in points, led the League in Win Shares per 48 Minutes whilst delivering an outstanding 14 triple-doubles across the entire season.

It feels as if any Magic season has to include him overcoming the rival that helped define their generation in Larry Bird. Johnson averaged 26 points, 8 rebounds, 13 assists and 2 steals per game during the 1987 NBA Finals. He had 20! assists in Game 2. It was the quintessential Magic Johnson campaign, where he received 65 of the 76 first place MVP votes ahead of rivals Michael Jordan (10) and Bird (1).”

“Magic was incredible to watch, but the 1986-87 season, he separated himself from the rest. Leading the team to 65 wins and 17 losses, Johnson played over 36 minutes per game averaging 23.8 points, 12.2 assists, and 6.7 rebounds. All of this while shooting over 50% from the field, Magic Johnson deserves to be in the discussion for the best season of all-time.”

“Magic had already won three NBA titles and two Finals MVPs prior to the season as the engine of the Showtime Lakers but in 1986-87 it was time for Magic to take full center stage and show how special he was.  In the earlier titles Magic was more of a facilitator while Kareem Abdul Jabaar shouldered the heavy scoring load but by 1986-87 Kareem was 39 and transitioning to more of a support role.  From the beginning of the season through the playoffs Magic showed his all-around game. He averaged 23.9 points (52.2 percent shooting), 12.2 assists, 6.3 rebounds leading the Lakers to the best record in the NBA (65-17, best of the Showtime era) and on his way to his first regular season MVP. To cap it off, Magic won a title over his longtime rival Larry Bird and the hated Celtics.  In that series Magic was nothing short of electric averaging 26.3 points (54.1 points), 8 rebounds and 13 assists.  Magic was so good he got Bird to proclaim he was ‘the best he’d ever seen.’”

“The best season from the best point guard of all-time, capped off by that skyhook in the 1987 Finals.”

“As with others, Magic might have compiled higher averages in other seasons, but his overall efficiency was at its highest during the Lakers’ chase for his fourth championship. Was it a coincidence this took place in the season immediately after my birth? I’ll let you decide.”

“One cannot make a list like this without including Johnson. And this seems like an appropriate place for his 1986-87 season. Having gone ahead and averaged 23.9 points, 6.3 rebounds, 12.2 assists and 1.7 steals a game, Johnson not only led the League in assists but also took home Most Valuable Player. He won the same award for his performance in the Finals, and won his fourth title. And this was all after the Boston Celtics momentarily made everyone forget the Los Angeles Lakers even existed. Johnson had a handful of memorable years but everything seemed to come together for him in 1986-87.”

“Once again, the stats, team accomplishments, etc… are all there… but what separates the top 10 from all the other incredible seasons for me is the impact on the game. The scoring, the defense, the assists, the passion, the energy, the clutch performances throughout the playoffs…I could see how this could be high on many lists. In the Finals Magic averaged 26.3 PPG, 8 RPG, 13 APG and recorded more steals than turnovers. More steals than turnovers—that’s incredible.”

“The Magic man was at his best this season, averaging 23.9 points and 12.2 assists per night. He was the League MVP, the Finals MVP, he led the NBA in assists and was All-NBA First Team. Statistically, he was never this good again.”

“This is Magic’s best year at the helm of the Lakers, and he led the team to a Finals win against the Celtics in the two teams’ last matchup of the 80s.The Lakers had an insane offensive rating of 124 points per 100 possessions with Magic on the floor on the balance of the season, and he still managed a strong shooting year despite the three-pointer being totally absent from his game. He averaged 26 and 13 over the course of the Finals including a masterful 22-point, 20-assist performance in Game 2, the only such game in Finals history and one of five in the history of the playoffs, a list he is featured on twice.”