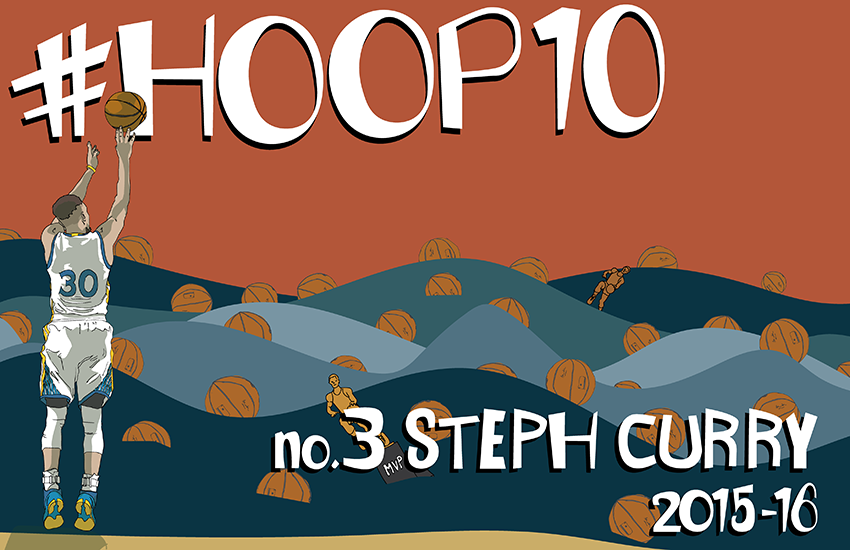 What might be the most controversial #HOOP10 selection is Stephen Curry’s past season. Don’t let the fact that the Warriors blew a 3-1 lead in the Finals deter you from the grandeur of Curry’s campaign.

It’s crazy how forgotten and underappreciated the most recent season on this list is. A seven-game sample size shouldn’t dilute the much larger picture. Up until the last three games of the season, you can make an argument that Curry’s season was the greatest of all time.

Curry, like he does on the court, shot the ball over his competitors—over Magic Johnson, Wilt Chamberlain, Kareem Abdul-Jabbar, Larry Bird, Michael Jordan, LeBron James, and Tim Duncan—not one of them was able to touch him.

Curry didn’t just have a super season, he didn’t just shoot the lights out, the man scored at a volume and efficiency we’ve never seen before. Curry is the first player to lead the League in PPG (30.1) and True Shooting Percentage (.669) since Bob McAdoo in 1973-74.

Just take a look at Curry’s shot chart below. He blazed it all season, putting a ring of fire around the arc that teams had no solution to. 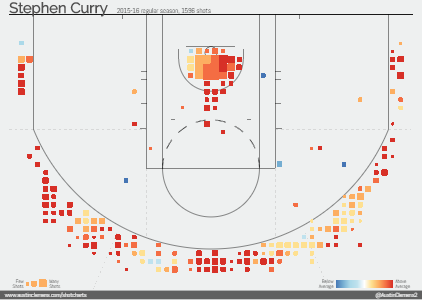 It’s easy to forget just how great Curry’s 2015-16 was; a disappointing Finals showing and a relatively quiet offseason have detracted from what was a real candidate for the greatest season ever from a scorer.

Part of what makes this season so damn incredible was the growth from Curry. After winning a hard-fought MVP race (one that his peers thought was undeserved), 67 games, and the title in 2015, no one would’ve been surprised by a winner’s hangover. It just didn’t happen. Curry came out firing, increasing his per-game numbers while simultaneously raising his efficiency, and the Warriors started day one in playoff form.

Curry joined the illustrious 50-40-90 club in style, dropping 50-45-91 percentages, and he did so while attempting the most triples in history (886). It’s hard to even put into words how lethal Curry was this season. His 45 percent barrage from deep is the highest mark of any MVP ever, and he made the most triples in NBA history. He was celebrating makes while the ball was still in flight. Curry’s three-ball in 2015-16 was an entire season of being on fire in NBA Jam.

Curry scored 40 or more points in 13 regular season games last year, and he shot above 50 percent in 12 of the contests. Despite taking circus-like shots night-in and night-out, Curry was chucker-proof. Unlike previous perimeter scorers prone to high-volume attempts and low efficiency outcomes, Curry bridged the gap.

The Warriors had an 18.3 net rating with Curry on the court and a -3.7 net rating when he sat. To this point, we haven’t even touched on winning, but the Warriors won 73 games and it should be just as astonishing to you now as it was before June.

This team didn’t win the title, but they will be remembered forever due to that record. Like the 2007 Patriots, this Warriors team will deservedly not be forgotten.

A scoring season like no other, the wins record, and then the biggie: the unanimous MVP selection.

In 1996, Michael Jordan was four votes away. In 2000, Shaquille O’Neal missed the mark by a single vote, as did 2013 LeBron James. Like it or not, Curry shined so bright he became the first star ever to leave not one doubter at the table.

The 131 first-place votes isn’t a fluke, it isn’t a mistake, it’s a cold hard reality warranted by the ice cold performance. It’s the result of a season in which there was the Golden State Warriors and everybody else.

Let’s also take a moment to add some perspective to Curry’s playoff run, which was exceptional up to the Finals. In the last two games of the Portland series, after returning from injury, Curry averaged 34.5 PPG, 7 RPG, and 9.5 APG with a .626 TS%.

In the final seven games of the 2015-16 season, Curry fell short of the par he set. He didn’t match the wild and extreme expectations set for himself by himself, but then again, we didn’t know that bar even existed until watching Curry blast through the 82-game sample like a hot knife through butter.

Curry’s 2016 encore was a thing of beauty. It was polarizing, but both he and the Warriors were must-watch television every night. The finale was forgettable, the journey remarkable.

“He is the only player to hit a 30.0 usage rate and a 65.0 True Shooting Percentage. Curry was at 32.6 and 66.9 respectively, so nobody is even close to him. It’s by far the most efficient high-volume season, with 73 wins to show for it. Maybe I’m being biased for it being fresh in my memory, but it was easily the most entertaining season I’ve ever seen.”

“I understand this will be a popular pick because the NBA is more widely distributed than ever, allowing more eyes to see Curry and the Warriors’ incredible run. However, I still believe Curry’s 2015-16 season will go down as the best. There are many factors you could use for Steph having the best season of any player in NBA history, but I think the most incredible part about his season is the fact that it came off of an extraordinary championship run one season prior. Many teams and players get complacent after championship runs, overcoming that emotional high, they generally start out slow the next season. This was not the case with Curry. He was statistically one of the greatest, all while being the most efficient. I don’t think we’ll ever see this type of season-long performance again.”

“Go ahead a claim recency bias if you want, but what Curry did this past season was ridiculous. He led the League in scoring at 30.1 PPG. Grabbed over 5 RPG and handed out 6.7 APG. He also led the League with 2.1 SPG. On top of all that, he shot his way to the 50/45/90 club while making 402 threes. And his team went 73-9 and was within seconds of claiming a second straight title. And he inspired a generation of ‘little’ guys and girls to play ball, because you don’t have to be big to succeed.”

“Before this season, the record for Offensive Box Plus-Minus (OBPM) was 9.8 (shared by three players). There had been 11 individual seasons with an OBPM at nine or better. Curry went out and posted a 12.4 OBPM in 2015-16, obliterating the old mark. He led the League in scoring and steals and broke his own record for made threes by a whopping 116.”

“Only he and Jordan ever averaged more than 30 points, 6 assists, 5 rebounds, and made over 50 percent from the floor. When you factor in that he also obliterated the single-season three-pointer record and averaged over 2 steals a game, it’s easy to see why he’s up here. Plus, the first-ever unanimous MVP award makes this season one of the greatest ever. If the Warriors would have won the championship, I would say without a doubt the best season ever, but I just couldn’t do it. Still, 73 regular season wins isn’t bad I guess.”

“This season leaves a bit of a bad taste after the way the Warriors were bounced, but it’s worth remembering how freaking insane Steph was this past year.

Curry’s three-point volume has been ludicrous, and the fact that he still posted a 50-40-90 season on over 10 three-point attempts per game is beyond comprehension.

Something that I always forget about Curry is how good of a rebounder he is; 5.4 rebounds per game, even in an up-and-down system, is pretty great for a facet of his game that nobody talks about.

I think this is the greatest offensive season I’ve ever seen, albeit in a limited window. His ability to shoot from more than 30 feet away off the dribble stretched defenses to their breaking point and enabled all of Golden State’s secondary playmakers to have the easiest jobs in the world.”

“Oh, I went there. Curry was the unanimous MVP and was likely a shot away from being Finals MVP and the leader of the greatest team of all time, and he did that last part while injured and you can’t convince me otherwise. OK, no, he did not have a great playoffs. But he did have the single greatest, most efficient offensive basketball season of all time, especially for a little dude. That would be 30/5.5/7 with an insane 50/45/91 slash line, with almost all of those contested, may I remind you. He had a top-eight PER and Win Shares Per 48 season ever and had the No. 1 Offensive Box Plus-Minus all time, as far ahead of MJ at No. 2 as MJ is ahead of Kobe at 40. And his numbers would’ve only been better if he hadn’t had to sit out half of the fourth quarters after leading his team to 73–9, another thing you may have forgotten. This was an all-time individual season and one none of us will ever forget.”

“The fact Curry hit 400 threes, but still had a 50-40-90 season is utterly amazing. He’s also completely underrated as a rebounder for his size. Just a tremendous season.”

“It is entirely possible that Curry strung together the best offensive season of all time and we’ve all forgotten about it already. He shattered the NBA record with 402 three-point field goals while leading the League in scoring (30.1) by a comfortable margin, and Curry’s efficiency (66.9 TSP, 63 Effective Field Goal Percentage) is something we haven’t seen from a guard. Forget the playoffs, when he was in sub-optimal physical condition, and bask in the ridiculousness of his offensive explosion last season.”

“An injury-riddled, disappointing postseason brought this season down a bit, but a record for fewest minutes per game by a scoring champion is a hard feat to beat.”