Leaving the game behind didn’t stop the #HOOP10 panel from making Timothy Theodore Duncan the first name to show up on this list. Duncan is a legend, of that there is no doubt; but his individual dominance is often forgotten or underappreciated. However, apparently not by this panel, who rewarded 2002-03 Duncan with 11 votes.

The 2002-03 season from Duncan, along with 1993-94 campaign of Hakeem Olajuwon, who just missed the list, and the superb play of 2010-11 Dirk Nowitzki, tend to stand out as we look back throughout history. The performances are particularly paramount due to the lack of star power that surrounded them on their way to the top.

In the NBA, nobody wins by themselves, but Duncan in 2002-03 may have come the closest. A 36-year-old David Robinson, on his last legs and in his farewell season, played a meager 23.4 minutes per game in the playoffs. Tony Parker was a second-year puppy at just 20 years old and was still getting scolded on the intricacies of playing point guard by head coach Gregg Popovich on the regular. Manu Ginobili, while a heady 25, was still just an NBA rookie who had yet to forge his big game reputation. As would be the M.O of all Spurs teams during the Duncan era, it was filled with key role players: Stephen Jackson (2002-03 was his breakthrough season, but he was untested in the postseason), Bruce Bowen (his defensive reputation was just beginning) Malik Rose (the heart and hustle of the squad) and a trio of sagacious but past-their-prime vets in Steve Smith, Kevin Willis and Danny Ferry.

Duncan was Wun Wun in the wildlings army, the lone giant who gave his team a fighting chance in any battle. The 2002-03 Spurs were essentially everything next year’s Golden State Warriors won’t be.

The Spurs won 60 games in 2002-03, and Duncan won his second straight MVP award on the basis of his spectacular regular season. Duncan’s 1,884 points paced the team, but he was the only player on the roster to even shoot at least 50 percent (Duncan shot .513), unless you count Devin Brown’s 50 percent shooting on 10 shots in 22 minutes that season. Duncan’s 1,043 rebounds were more than the Spurs second (Robinson, 508) and third leading rebounders (Rose, 506) combined. His 316 assists trailed point guard Tony Parker by 116 for the team lead.

As good as his 81-game season was, Duncan was just getting started. He would build on those numbers, getting better with each round of the playoffs, setting 2002-03 apart from the two decades of straight excellence Duncan ushered into San Antonio. Duncan’s campaign only grows in its lore when you realize it was the 2003 San Antonio Spurs and not the oft mentioned 2004 Detroit Pistons that ended the Shaquille O’Neal-Kobe Bryant Laker dynasty. 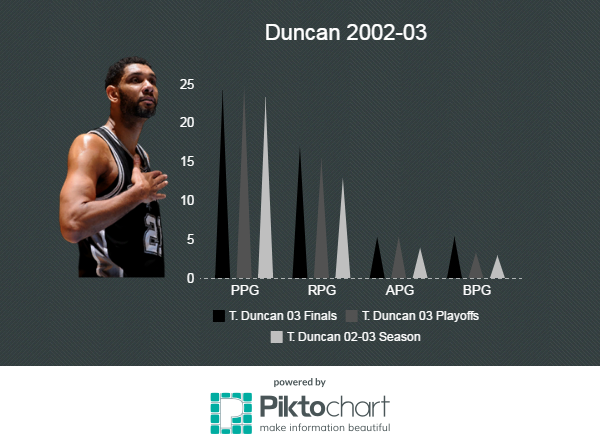 The Lakers were hunting for a fourth consecutive title (a feat only the legendary ’60s Celtics have ever touched) in 2003. The Spurs stood in the way of the Lakers’ goal (Ed note: In 2003, it was widely assumed that the Finals winner would come out of the much stronger Western Conference. Only one team in the weak East, the Detroit Pistons, even notched 50 wins.) in the Western Semifinals. The Lakers had looked shaky all year as the Kobe-Shaq feud was in full effect, but they had disposed of the upstart Minnesota Timberwolves in the First Round and had grabbed the momentum from San Antonio in the series with two straight wins, tying the series up at two apiece. Duncan, sensing his Spurs might just be in the danger zone, took over. In the critical next two games, Robinson scored a total of 13 points as Duncan outdueled the Diesel and earned the “Big Fundamental” moniker and eternal respect from Shaq.

Duncan’s Games 5 and 6 of the Western Conference Semifinals:

One could reasonably wonder if winning ever came hard to Duncan and the Spurs, but 2002-03 was different. It took spectacular stat lines that the new age NBA fan won’t likely remember Duncan executing, but he took that Spurs team to the promised land. After snuffing out a 60-win Mavericks team of Nowitzki, Steve Nash and Michael Finley in the West Finals in six games, Duncan set his sights on New Jersey. You could scoff at the Nets and their 49 wins, but they had MVP candidate Jason Kidd, at the time the undisputed best point guard in the game, with a trifecta of young, defensive-minded players who could do do some damage on the offensive end in Richard Jefferson, Kerry Kittles and Kenyon Martin. Plus, the Nets were grinders—they had the No. 2 defense in the League that season—and had a revenge mission that season after they were unceremoniously swept in the previous Finals by the Lakers.

The Duncan-led defense held Kidd and Martin to a combined 35 percent shooting throughout the series, and for the second straight year, the New Jersey Nets went home with their hands empty.

We’re in an era of superteams, an era where the game’s biggest stars can tuck-tail and join the enemy. Can you imagine—well, actually Shea Serrano says it better than I can. While far from an enjoyable thought, it makes the 2002-03 Duncan season that much more remarkable.

“The best power forward of all-time with his masterpiece. He still holds the record for (playoff) win shares (5.94), which is simply a staggering number.”

“The list was deep but Duncan became an NBA champion, Finals MVP, MVP, All-NBA First Team, All-Defensive First Team and All-Star in this one season.”

“One of the greatest NBA Finals ever witnessed, with 24.2ppg, 17.0rpg, 5.3apg and 5.3bpg, including a near quadruple double in game six, where he fell two blocks short.”

Justin Rowan of Fear the Sword:

“First team All-Defense, All-NBA First Team, regular season and Finals MVP, world champion. It is tempting to simply list the accomplishments for one of the League’s greatest yet most understated stars to ever lace them up. Duncan was the man, and while it wasn’t sexy, it was dominant.”

“Coming off his second consecutive MVP season, Duncan’s performance in the 2003 playoffs was positively ridiculous. David Robinson was a shell of his former self, and Tony Parker and Manu Ginobili were young and not ready to lead a championship team. The most reliable teammate Duncan had may have been Stephen Jackson. Thanks to the 24 games the Spurs played, Duncan set records for postseason Win Shares and VORP. In the regular season, he essentially replicated his success from 2001-02, though he was just slightly off his career highs in several advanced statistics. But mostly, this was Duncan’s declaration to the NBA that he was a truly elite star, right as Kobe Bryant and Shaquille O’Neal were getting at each other’s throats.”

“Considering Duncan’s per-36 chart is basically identical year after year, it’s nearly impossible to pick a best individual season. And really, Duncan’s greatness lies in his non-individualism—except in the 2003 playoffs. TD had the single greatest playoff dominance of all time, culminating with 24/17/5/5 in the Finals and an absurd 21/20/10/8 against Kenyon Martin to close out the season with one of the all-time exclamation marks.”