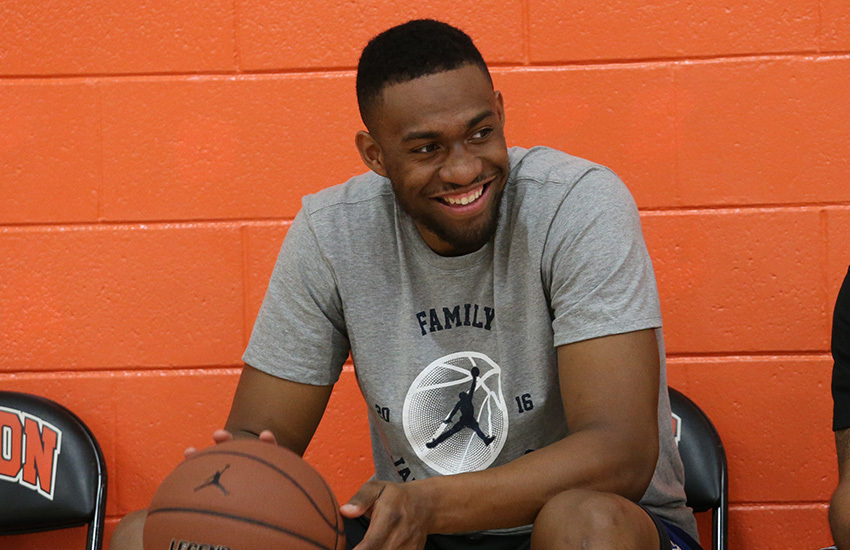 Jabari Parker may not have a lot of tenure the NBA, but after this summer, the young Bucks forward has certainly commanded a lot of respect, particularly from those closely involved in Chicago’s basketball community.

One day after participating in an ESPN town hall panel on athletes, and their responsibility to lend their voices to address the violence problem in his hometown, Parker put out a call to several prominent basketball players from the Windy City to play in a free, open scrimmage called Pick Up for Peace. The game was held at the Quest Multisport facility, formerly known as ATTACK Athletics when it was owned by famed basketball trainer, Tim Grover.

A week prior to his participation in the town hall event, Parker penned a moving piece in The Players Tribune where he not only addressed the violence that plagues inner city Chicago, but his intention to use his status and stature to give back to the community and help those who grew up like him.

“Chicago isn’t the same city anymore. It’s worse. A lot worse,” Parker wrote in the essay. “Black Lives Matter and police brutality are issues that are important to me. But I also need to speak up for my city. Chicago’s kids need to know that their education matters, that their lives matter, because every day they are more and more at risk of being victims of gun violence … Everybody in Chicago needs to do more, for these kids and our city.”

Parker pledged to hold free basketball camps in Chicago, which he has, but the Pick Up for Peace game was an impromptu decision to allow kids in the community to come out, have a good time and see the way professional basketball players compete against one another in the offseason.

There were roughly 500 people in attendance and the game itself was a loose run where guys weren’t going too hard, but were still aggressively competing with one another while working on new wrinkles to their games. There were no official stats kept, and the highlight of the night may have been Parker’s between-the-legs dunk on a fastbreak in traffic, while guys like Bynum, Marion and Brown all showed that they might still have what it takes to compete in the League.

The night was both symbolic and ironic. Not more than a few hours before the players took the court, Dwyane Wade’s cousin, Nykea Aldridge, was killed in gang crossfire as she walked to register her children for school. Just a day prior, Wade—like Parker—participated in the ESPN town hall event via satellite video. He too discussed the problem of violence in many Chicago communities, and told of his own experiences growing up on the city’s South side. The death of Wade’s cousin to gun violence only helped to underscore the importance of event’s like Parker’s.

Very fortunate to share my story with you through The Players Tribune. I love my city and I won't give up on it. Link in bio http://www.theplayerstribune.com/jabari-parker-chicago-gun-violence/

Overall, the Pick Up for Peace game was symbolic of not only the love that Parker has for his community and his city, but the amount of respect shown to him by the players who gave of their time to play, and afterwards, took pictures and signed autographs for anyone who asked. For many of those in attendance at Quest Multisport, it may have been the closest they’ll ever get to a professional basketball player at any level, which certainly added to the fun of the event.

Ultimately, the game itself was a huge success, orchestrated by a player who is certainly wise beyond his years and who shares a passion for giving back which has, for many decades, been exhibited by his father, Sonny.

After his NBA and basketball career ended, the elder Parker returned to his native Chicago to sponsor youth leagues and tournaments, all with the aim of helping to keep kids on the right path, in a city where going the wrong way is the easiest choice for many to make.

“Jabari has seen some of the things I’ve done in the city throughout the years in the community and he’s embraced the idea that we’ve all got to do what we can to make it safe for everybody,” says Sonny Parker.

“There’s not enough positive programs for our young people. They can’t go to playgrounds, to the park, they can’t even play outside because you never know when violence is going to happen in this city,” the elder Parker added. “Jabari has always told me, ‘Dad, basketball is what I do, it’s not who I am.’ So if you listen to what he’s said [this summer] and the things he wants to try and do in the community, being a native son of Chicago, we should all be very proud of him for trying to get kids off the street and into a safe environment where they can have fun and just be kids.”

Said Jabari Parker just before the opening tip of the game, “This is an event for me and my big brothers—guys I idolized growing up—to come together for you guys. Hopefully, through this game we can push peace and nonviolence, even if it’s only for a short amount of time.”

Parker has long been considered a basketball prodigy in the City of Chicago, but his greatest gift may not be his on-court ability, but his willingness to show those in his city that he wants to help them achieve in life, just like he has.