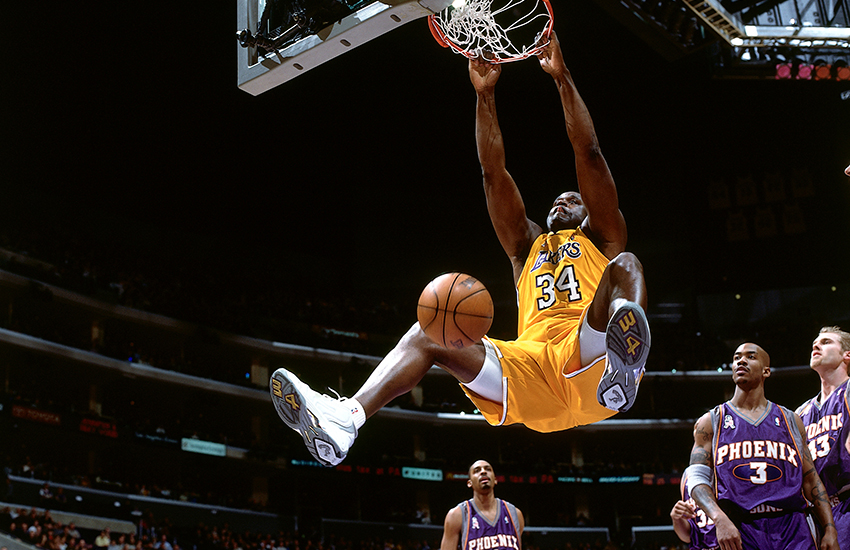 Of all the enduring legacies that the big man will leave as he is inducted into the Basketball Hall of Fame this Friday, in a game where perimeter players have always gotten the lion’s share of adulation from fans, Shaq singlehandedly reversed that trend.

He wasn’t your ordinary 7-footer. When the Orlando Magic made Shaq the No. 1 overall pick in the 1992 NBA Draft, he captivated the basketball world with a skill set that had never been seen from someone his size.

Think of the big men who were still active when Shaq came into the League in ’92. Hakeem Olajuwon, David Robinson, Patrick Ewing, Dikembe Mutombo, Brad Daugherty, Rik Smits and Vlade Divac. The only one on that list with a similar dominance and ability was Olajuwon, but he wasn’t overpowering dudes as much as he was embarrassing them with deception. Shaq was literally breaking the game, leaving backboards in glass bits and making basket stanchions kneel in deference.

In his very first game as a professional against the Miami Heat, Shaq had 12 points, 18 rebounds and 3 blocks. In fact, during his rookie campaign, Shaq would fail to notch a double-double only 11 times in the 81 games he suited up for the Magic that season. Shaq was an All-Star, the runaway winner of the Rookie of the Year award, and he helped Orlando to a plus-20 in the win column from the previous season, just narrowly missing the playoffs with a 41-41 record.

But it was clear after just one season, Shaq was going to be an unstoppable force in the NBA for many years to come. However, his versatility between the lines wasn’t the only thing that people took notice of. Off the court, O’Neal was ready to show the world that he was more than just a basketball player. Like Michael Jordan before him, Shaq was out to prove that big men could be the face of Fortune 500 brands just like the guards.

He was a pitchman for a number of large, well-known companies, such as Pepsi and Reebok. However, it was what he did for the latter organization that took everyone on Madison Ave. by surprise.

There has long been a saying inside the sneaker industry that big men don’t sell shoes. Shaq dispelled that notion pretty quickly as his signature Reebok shoes went flying off the shelves. Reebok basketball had made some headway with the success of the Pump, but a Reebok signature shoe? Never before. Shaq had kids lining up for scaled-down versions of his size 22 Shaq Attaqs.

Not only could he sell shoes, but his jerseys also flew off the shelves back then. The Orlando Magic were an expansion team who, in three years prior to Shaq’s arrival, went an abysmal 70-246. They weren’t on many people’s radar nor on people’s backs prior to the 1992-93 season.

But in the ’90s, team gear was hot, and the arrival of Shaq not only launched sales of his jersey, but Magic merch also became a must-have item. As a pitchman, given his gregarious personality and appeal, especially to the younger set, Shaq could sell almost anything.

He could also act.

The big man starred in a number of films, most notably, Blue Chips. You can snicker at Kazaam and Steel, but it was a belief from Hollywood that Shaq was bankable. And no list of his extracurricular, off-court accomplishments would be complete without mentioning his rap skills. To this day, Shaq is the only NBA player to ever score a certified platinum (Shaq Diesel) and a gold (Shaq Fu: Da Return) album. He truly was the NBA’s modern day renaissance man.

Jack of all trades, and a master of one.

In his second season with the Magic, Shaq helped the franchise to its first ever playoff appearance, getting swept in the First Round by the Indiana Pacers. In his third season, the Diesel solidified his status as an all-time great by leading Orlando all the way to the Finals, beating a fresh-off retirement, rusty (and unforgetful) Michael Jordan, along the way.

Although Hakeem Olajuwon and the Houston Rockets won the series in a sweep, with Olajuwon providing O’Neal with a clinic in the low post, the message had been sent around the League: Shaq was the most dominant, unstoppable force in basketball and it would only be a matter of time before O’Neal would be hoisting the Larry O’Brien trophy in his considerable hands. The only real question was how many times would he do it. But it was after that 1994-95 season when the next stage in Shaquille O’Neal’s career would slowly begin to take shape and he would leave his mark on the basketball world forever.

The big man exploited a loophole in his contract that allowed him to become an unrestricted free agent after his fourth season in Orlando. This, along with some perceived disrespect that the franchise valued Penny Hardaway over him, opened the door for Shaq to move cross country to Los Angeles and continue a legacy of Lakers big men that has yet to be matched by any team. He joined forces with Phil Jackson and Kobe Bryant and formed an L.A. dynasty that hadn’t been seen since the pairing of Magic Johnson and Kareem Abdul-Jabbar.

In a city known for its stars, Shaq literally became its biggest.

Shaq was so big that when the NBA put together the 50 Greatest Players in NBA History in celebration of the League’s 50th anniversary, the blue ribbon panel of basketball minds decided that even after four seasons and less than 300 games, O’Neal was fit to join such luminaries like Bill Russell, Michael Jordan, Kareem Abdul-Jabbar and Wilt Chamberlain. Like those names, O’Neal was expected to deliver multiple championships.

But it wasn’t always Roses for O’Neal in Los Angeles. He famously clashed with the Bryant, who often chided him for his work ethic, or lack thereof. They were opposites on the court. Kobe was the tunnel-visioned maniac whose sole focus was to be the game’s best, using the Jordan playbook of taking every practice seriously and committing yourself to your craft. Shaq was the once-in-a-lifetime player who didn’t have the urgency to nurture his talent, instead preferring to raise his game when needed.

He was also lambasted in the media for his poor free throw shooting. In Orlando, his proficiency at the charity stripe wasn’t as much of a focal point because of everything else he brought to the table. But with the Lakers, one of the NBA’s marquee teams and bigger media markets, his subpar free throw shooting statistics were magnified and led to the creation of a strategy named in his honor, “Hack-a-Shaq.”

However, O’Neal scoffed whenever the term was mentioned and famously denounced it as ineffective by saying, “I make them when they count.”

Four seasons into his Los Angeles tenure, after frustrating playoff losses to the San Antonio Spurs and the Utah Jazz, Shaq and the Lakers finally broke through and won the first of their three consecutive NBA Championships in 2000. That same year, O’Neal also took home his one and only League MVP award, an accomplishment that to this day, still doesn’t sit well with Shaq, especially in the wake of Steph Curry’s unanimous MVP win this past season.

During his peak Laker years, it could be argued that Shaq should’ve left with more than a single MVP trophy. The media and basketball world’s love affair with the go-go Suns in the early ’00s robbed him of at least one. O’Neal’s pairing with the equally deserving Bryant might’ve costed him some individual glory. Whatever the reasons, it’s strange that such a dominant career would only see one season where he’d be honored for being the League’s most pivotal player.

In his eight years in a Lakers uniform, Shaq helped the team reach four Finals, but in ’04 (after a Finals loss to the Detroit Pistons), the Lakers decided to move in a new direction, making the 25-year-old Bryant the face of the franchise over the 31-year-old O’Neal. The strained relationship between the superstars and Shaq’s outspokenness about his teammate and his situation in Los Angeles, led to his trade in the summer of 2004 to the Miami Heat.

While on South Beach, Shaq’s larger than life stature took hold and by 2006, the Heat had won their first NBA title with O’Neal, alongside Dwyane Wade, leading the way. However, this title would transition Shaq into the final stage of his career, that of a past-his-prime center who was supposed to bring championship experience to a contender. At every stop, Shaq would flex and every general manager and fanbase would see a championship in his bicep, even when his swole was long gone.

By the 2007-08 season, just two years removed from their championship run, the Heat quickly fell back to expansion level. O’Neal and Wade both battled injuries that year and the big man clashed with head coach and general manager Pat Riley. Just games into Miami’s 15-67 season, Riley traded Shaq to the Phoenix Suns, a team perceived to be on the rise in the Western Conference. However, O’Neal’s run in Arizona as the “Big Shaqtus” would last just a season and a half, and in 2009-10, he joined forces with LeBron James and the Cleveland Cavaliers and the next season, 2010-11 would be his last in the NBA as Shaq suited up for the Boston Celtics.

But the luck of the Irish would not be with O’Neal as persistent injuries to his Achilles brought an end to his playing career.

Should he have accomplished more? A better shooting touch from 15 feet while left unguarded would have netted him the 30K point milestone. For a man that stood 7-1 and over 300 pounds, a bit more effort would have led to 15K rebounds. The same reasons should have led to at least 3K blocks. The biggest what-if might be the four championships. You couldn’t help but imagine a player as unstoppable as Shaq would’ve won more than four. Had he (along with Kobe) tried to make it work, it’s plausible that they could’ve won at least one or two more together.

The critics will also argue that Shaq could’ve stretched his gifts to the max had he dedicated himself to staying in shape and expanding his game instead of exploring his many diverse interests outside of the court. Still, it’s those outside interests, the goofy one-liners and “your mama” jokes, the vast list of nicknames he’s coined (we won’t get into the ones he’s given himself, but Shaq does  gets credit for “The Big Fundamental,” “The Truth,” and “Flash”), the commercials, the crazy All-Star “sneaker contraptions” (we’ve seen cell phone shoes, a camcorder shoes, a slot-machine shoe and remote-control shoe car), the movie cameos and music videos that made Shaq what he was.

Even in his post playing days, Shaq is still entertaining. As the comedy effect on Inside the NBA, the grinning shill for any and everything or just being the biggest fun-loving man on the planet.

Shaquille O’Neal will soon reach hoops immortality. His impact on the game made him a legend, and his dominance on the court will probably never be matched by anyone at the center position.

While it’s true that all good things must come to an end, it’s only fitting that the end of the basketball road for Shaq is the Hall of Fame, where he belongs alongside all of the other great players and coaches who have made basketball what it is today.

Congrats, big fella. You deserve it.