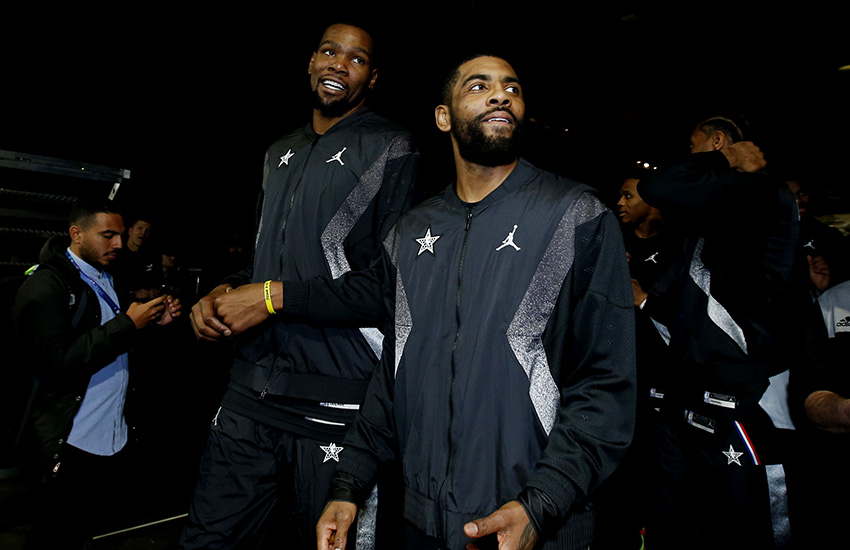 Six years ago, almost to the date, the Brooklyn Nets entered into the “Endgame.” Unfortunately for Brooklyn, the Nets chose one of the 16,777,215 scenarios in which they were defeated. The Nets rolled the dice for a win-now shot at the title, trading for three nicknamed players who had championship experience to join an existing core of Deron Williams, Brook Lopez and Joe Johnson, while being led by first-year head coach Jason Kidd. The price would be steep—a handful of rotation players and four future first-round picks that would become Jaylen Brown, Jayson Tatum (Boston swapped No. 1 pick for Tatum), Collin Sexton (who was part of the trade package for Kyrie Irving) and James Young—and the results were disastrous. A past his prime Truth was just a half-truth; the once great Big Ticket left fans seeking refunds at the box office; the Jet was grounded for most of the season. Danny Ainge was lauded for his cunning and the Nets were lambasted on the court and in the columns for the next half-decade.

Following the selling of their soul, the Nets would win one measly series and a total purge of the roster was needed. Without their own picks and an aging and middling roster, the Nets had to make the arduous climb back to relevancy, an undertaking led by first-time GM Sean Marks. Through a bevy of savvy, money-munching, asset collecting and culture building milestones helped turn the Nets into what they are now, one of the most promising franchises in the League.

The Nets finally got their hyperjump to contention but it comes behind the patient grind of Marks and not the faulty booster engine the prior regime tried to strap on.

The Nets’ big splash this offseason reverberated around the League like a tidal wave for a week before being quickly expunged by the tactical strike Kawhi Leonard led to rebuild the Los Angeles Clippers. With Kevin Durant set to miss most, if not all of next season, the Nets victory has been pushed to proverbial back page but it warrants its own headline.

The Nets offseason is not without risk, nor skepticism. Kyrie Irving is a supreme ballhandler who might be the most unguardable point guard in the game, but is also an eclectic and unpredictable personality. Durant is easily aggravated and coming off the most trying injury in basketball. However, if the combination of those two, even with the baggage and injury worries aren’t worth the risk to your favorite franchise, your favorite franchise isn’t cut out for the great game, as Petyr Baelish would’ve said.

Durant is one of the 15 best players to ever touch a basketball. Irving is one of the five best point guards in the game today. Whatever their collective shortcomings, the ceiling for this team raised dramatically the second their decisions were announced.

The contrast from where they were year even a year ago is stark. Last season, the Nets were about grit and a massive, collective chip that resided on each and every shoulder down the bench.

Overpaid veterans, dumped by their former teams, young players who slipped in the draft due to cynical projections of injury comebacks, and league journeymen all playing to prove a point each and every night. The Nets were constantly commended for the effort and chemistry they displayed despite being a near .500 team most of the season.

Headlining the unit of misfit ballers was D’Angelo Russell, a young and talented combo guard who had been cast out of Los Angeles without blessing. The second overall pick in the 2015 draft. Russell was once destined to replace Kobe Bryant, but it would be another Lakers legend (Magic Johnson) who painted Russell as selfish, immature and unable to lead before kicking him out the door—much to the Nets gain of course.

However, the Nets moving on from Russell after a revitalized turnaround and his first All-Star season was a damning and definite admission that their culture and identity was impermanent, unfixed. It’s the way the business goes, but the swift swap shouldn’t be overlooked.

Also leaving with Russell; DeMarre Carroll, Allen Crabbe, Ed Davis, Jared Dudley, Treveon Graham, Rondae Hollis-Jefferson and Shabazz Napier—team expendables to most, but all players that were a vital part in the Brooklyn revival.

* Yes, if you’re wondering, Deron Williams will still be on the books for the Nets this coming season for $5.4 million.

Both DraftKings and FanDuel have the Nets over/under for the 2019-20 season set at 47.5 wins. If the Nets were to hit the over with 48 wins, it’d be a six game improvement from the prior overachieving campaign.

Will Irving be a significant enough of an upgrade over Russell to push the Nets to new heights despite Durant not being there?

It’s the most pressing question at hand. Yes, Irving chose to come to Brooklyn, opposed to Cleveland where he was drafted or Boston where he was traded but he struggled to find happiness at both prior stops.

The Nets likely hope that Jordan, a friend and former Olympic teammate of both Durant and Irving can help maintain a positive workplace culture.

Second to Irving’s demeanor and ability relative to the departed Russell, how do the young guys adapt to the changes and do any of them take a step forward?

Jarrett Allen is one of the best shotblockers in the game, an excellent rim-runner, a natural fit to occupy the middle in today’s game. You have to wonder how Jordan being signed to a significant deal could change the dynamic for the developing former Longhorn.

Imagine going from starting playoff games just 2 months ago to starting in summer league. This is wild. https://t.co/ZG02JHIDtX

LeVert started last season on a Most Improved Player pace, broke his leg and returned less than four months later to help the Nets’ playoff push.

He was the Nets best player and leading scorer in the playoffs (21 PPG, 61.2 TS%) and now, he’s eventually going to be sandwiched between both Irving and Durant.

It’s easy to say the right things in the offseason but it has to be comforting for Nets fans that LeVert seems open to the changes.

LeVert recently told Tom Dowd of NBA.com the following: “Doing whatever it takes to win—I think that’s been my role since I’ve gotten here and I think that’s always going to be my role.”

With heavily praised veterans in Davis and Dudley out the door and real expectations mounting, does Brooklyn maintain the camaraderie and close-knit culture that made them tick last season?

Spencer Dinwiddie, is one of the best off the bench guards in the League, during certain spurts, it appeared he was capable of giving the Nets everything that Russell did and more.

But Dinwiddie’s most important job might be as the mediator and tone setter between the new and old guard. Allen and Dinwiddie are incredibly close, Dinwiddie was also active in recruiting Irving. If things go well for this Nets squad and the day-to-day interactions directly oppose the misery of Irving’s Celtics last season ,be ready to credit Dinwiddie.

In earnest, the Nets are playing for the 2020-21 NBA Championship. If the Nets are to reach their lofty long term goals—it’s imperative that part of the plan be to keep Durant off to court this coming season to fully recover—it’s crucial they lay a solid foundation for the future.