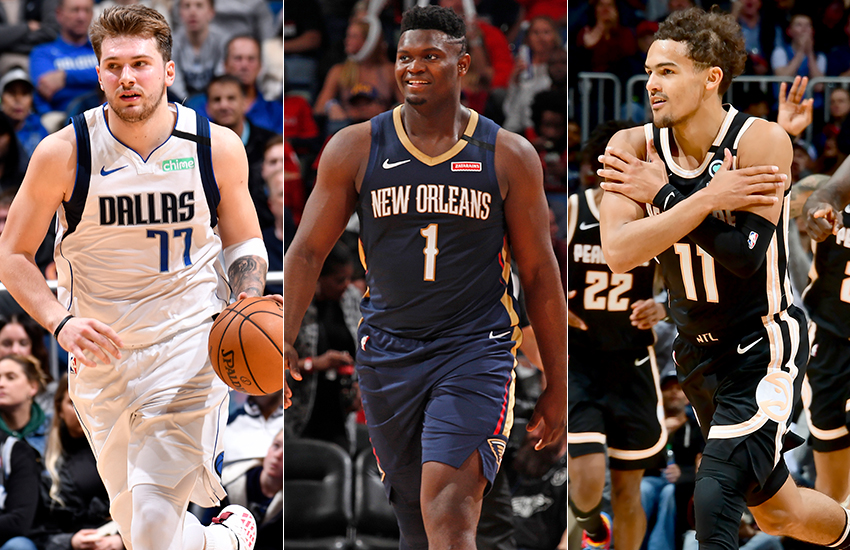 As the 2019-20 NBA season transitions into the final stretch, we asked diehard NBA fans to evaluate the field of young talent across the League.

These lists often come out in the offseason but they are unfortunately always premature. How do you rank rookies who have never played a minute vs. players who have spent two or three seasons in the League?

You’ve likely read a similar list asking you to rank the top 25 players under 25, perhaps even on HOOP in the past. It was my belief that shrinking that field to years of experience made more sense. Players like Giannis Antetokounmpo and Bradley Beal were high risers on lists like that in years past but their range of experience is so vast in comparison to most of the field.

Here’s how the process worked, voters filled out a Google form asking them to rank every player in the league still currently on their rookie deal. Yes, even if an extension has already been signed. Participants voted on a value scale of 1-10, with the low end representing players unlikely to see a second contract and the high end representing the absolute elite. The votes were then averaged out and I was given a clear list of my 155 entries into the form. Thank you to those of you who spent the cumbersome amount of time needed to vote through the whole ballot.

A few intriguing notes before the main list reveal:

A light in the night, Graham leads a short list of reasons for Hornets fans to endure just months after the greatest player in franchise history moved on.

The 25-year-old and former second-round pick has been a Most Improved Player candidate all year long and is averaging a team high 18 PPG to go along with a team high 7.8 APG.

After a bumpy start this season, Ball is averaging 13.3 PPG, 7.1 RPG, and 8.5 APG, in 2020. He’s shooting an above-average 38 percent from 3 on just shy of seven attempts a night and though his name isn’t in the media as often, he’s transitioned well in New Orleans.

Despite some transparent tomfoolery, Bogdanović will head into his restricted free agency a King. Although it’s easy to criticize Sacramento for any number of blunders, trading Marquese Chriss for Bogdanović remains a savvy move. The combo guard will likely be highly sought after this summer.

If he keeps it up, Miami’s sharpshooting rookie will only be the third first year player ever to shoot 39 percent or better from deep on over five attempts. The other two were Rudy Fernández (2008-09) and Landry Shamet last season. Herro is an integral part of this surprisingly successful Heat team and will be needed for their playoff run.

Collins was due for a big year and was receiving a good amount of Most Improved Player chatter prior to the season. However, due to a 25-game anti-doping suspension, Collins’ leap year was put on hold. The hyper-athletic big man is making up for lost time, averaging 21.8 PPG, 10.5 RPG and shooting 60 percent from the field in 2020.

The newly crowned 3-Point champion has transitioned into a bench role for the Kings after being replaced by the aforementioned Bogdanović. That said, the demotion should be spun as a clear positive—Hield is shooting a bloody insane 48.2 percent from 3 on 9.3 attempts a night off the pine after shooting a pedestrian 36 percent as a starter earlier this season.

Fultz who missed making the top-25 was the Magic prospect of intrigue for most heading into the season, but Isaac stole the show early with his Defensive Player of the Year type impact. Isaac has only played 32 games this season due to injury, but he joins a very short list of players to average better than 1.5 steals and 2 blocks a contest. Isaac might be the one clear long-term building block in Orlando.

Ayton, like Collins, had his season stalled due to a suspension, but he too seems to be figuring things out. He’s been heavily utilized with Aron Baynes in and out of the lineup, seeing time both as a starter and a reserve. Ayton is averaging 19.7 PPG and 12.3 RPG shooting 55 percent from the field in 2020. How high usage bigs are utilized on winners in the current NBA is up for debate, but Ayton’s showing the skill set that had so many scouts pushing him as the No. 1 prospect in a stacked 2018 draft.

You’ve got to love high-risk, high-reward prospects panning out. Porter Jr.’s health remains a worry and his durability is suspect but he’s been nothing short of electric in his early role. In the 11 games he’s been given greater than 21 minutes, he’s averaging 16.2 PPG while shooting 50 percent from three. Granted, it’s the smallest and most select of samples, but if Porter can stay on the court, he’s a difference maker for the title-hopeful Nuggets.

Coming off a very impressive, albeit, inconsistent playoff run, Murray looked like a possible first-time All-Star. Murray started slow, not unlike his All-Star teammate Nikola Jokic, but since Christmas he’s averaging 21.6 PPG, 5.2 APG, and has shot 48.7 percent from the floor. Murray needs to be the second star Denver believes he can be if the Nuggets are going to upset the existing Western Conference powers.

The highest ranked of the three Kings on the list, Fox carries the hopes of a broken franchise. After a genuinely fun 2018-19 campaign, the Sacramento faithful received the dangerous gift of hope and were promptly whipped with it. The Kings were 10 games under .500 as of February 23 and are still searching for an identity at either end, currently ranking 20th on both offense and defense. Fox is averaging 21.9 PPG in 2020 but he’s shooting a depressing 31 percent from deep after shooting a surprising 37.1 percent last season.

The man separated the selections of Luka Dončić and Trae Young, so the expectations remain high for the gifted forward. Jackson Jr. showcases a very unique skill set, equal parts rim protector and sniper, and he’s been an excellent running mate for Ja Morant. According to basketball-reference, he’s the tallest player ever to shoot the 3-ball at a clip of five or more a night.

The son of an NBA legend has become his own man in NBA circles, serving as an All-Star on behalf of the Pacers. Sabonis has improved every season and in his fourth NBA campaign is averaging 18.4 PPG, 12.5 RPG and 4.8 APG and shooting 54 percent from the floor. He’s outshone previous franchise hopeful Myles Turner and looks like the future of the franchise.

Prior to the 2018 draft, I asked hoopheads if they’d rather have Brown or the No. 2 overall selection from the draft, 52 percent chose Brown. That pick became Marvin Bagley, who finished 29th in the voting but Dončić and Young are still yet to appear. Brown has become a competent starter in today’s League. A sturdy, though, perhaps overrated defensive player and a more than capable and perhaps underrated offensive player. Brown is averaging 20.3 PPG this season, a large leap from the 13 he averaged last season.

Kawhi Leonard wanted Paul George and he got him, but the Thunder certainly took advantage of the situation with the price in return being Gilgeous-Alexander. SGA has forged an excellent partnership in the backcourt with Chris Paul and he hasn’t missed a game all season. The 21-year-old is the highest ranked Canadian on this list and could be the future of both the Thunder and Canadian national program.

Ingram deservedly joined the next generation of stars in his first All-Star game, following his outrageous growth as a scorer this season. How Ingram ends up fitting with rookie Zion Williamson could determine whether or not the Pelicans have a future contender brewing. Ingram has not disappointed in the interim; 24.7 PPG with shooting splits of 48/41/86 on the season.

The Miami Heat’s most important player is anchoring the defense while averaging 16 PPG, 10.4 RPG, 5 APG and shooting 57.8 percent from the field. Adebayo has the eighth most triple-doubles this season and can facilitate as well as any big in the League. Adebayo and the Heat are 6-1 vs. Milwaukee, Philadelphia and Toronto—a sign of things to come?

Tatum is becoming a superstar in front of our eyes. He’s averaging 28.7 PPG over his last 10 games and 25.2 PPG in 2020. He’s the most important player for the Celtics on either side of the ball and after some rather outlandish struggles converting on attempts early in the season, he owns splits of 47/41/79 in the new year.

Mitchell’s numbers are on par with last year and for his troubles, he received his first All-Star bid. In the offseason, it was believed that Mike Conley entering the fold would make life easier for Mitchell offensively and that perhaps his efficiency would rise. Conley has been a disappointment but the Jazz have got fantastic contributions from both Bojan Bogdanović and Jordan Clarkson and as a result, Mitchell has seen his shooting splits lift. If Utah is going to validate their contender label, Mitchell will have to find yet another gear in the postseason.

In 50 games for the Grizzlies, Morant is averaging 17.6 PPG, 3.4 RPG and 7.6 APG. But more importantly, he has Memphis in the Western Conference’s eighth seed. If he and the Grizzlies can hold on, Morant should take home the Rookie of the Year trophy—even with Williamson storming head first into the race.

It’s possible that Simmons has become the most versatile defender in the League. He’s averaging 16.7 PPG, 7.8 RPG, 8.2 APG, and a league-leading 2.1 SPG. Of course, to no one’s surprise, the jumpshot and general lack of range is stopping him from being a clear MVP candidate for the next 10 years. In spite of his shortcomings, Simmons has generational gifts as an athlete and passer. He’s a very special player. Hopefully his back isn’t a serious issue and the Sixers can right the ship prior to the postseason.

As polling for this project went on, Williamson was playing NBA games four through eight. It’s incredible that a sample so small was enough for fans to take Williamson over the immense amount of talent already talked about but had we waited another week, he might’ve risen even higher. Williamson is now 11 games into his career, averaging 27.6 MPG, 22.4 PPG, 7.2 RPG and shooting 57.8 percent from the field. It’s probably important to note that durability at his size was a concern but he’s exceeded a ridiculous amount of hype to date.

Last year’s Most Improved Player was rewarded with his first ever All-Star season, the Raptors now have the third best record in the NBA and the championship hangover is nowhere to be found. Siakam has slid seamlessly into Kawhi Leonard’s role as the focal player on both ends of the court, a place he’ll likely hold as he enters the prime of his career. The Raptors are 17-1 over their last 18 and it’s crazy to think where they would be right now had they held onto Leonard.

Young is 21 years old, in his second season—one in which he was an All-Star—and averaging 30 PPG to go along with 9.2 APG. If the Atlanta Hawks were any good, Young and company would be leading the highlight shows every single night. The numbers are unmatched by any player of the same age and it’s not like he’s chucking on a bad team (Young has a true shooting percentage of 60.2). Young might be the worst defender in the League but he also might follow Steph Curry and Steve Nash in breaking the scale offensively.

A rather unsurprising conclusion to the list, Dončić has shattered even the loftiest of bars and is perhaps the next face of the League. The mark of a truly great player is the normalization of absurd stats and at just 20, Dončić is averaging 29 PPG, 9.6 RPG and 8.6 APG. He’s put together 12 triple-doubles, scored 40 or more four times, (leaving all  with the win). Most importantly, the Mavericks are 29-16 with him in the lineup and way ahead of where almost everyone thought they’d be in their rebuild.