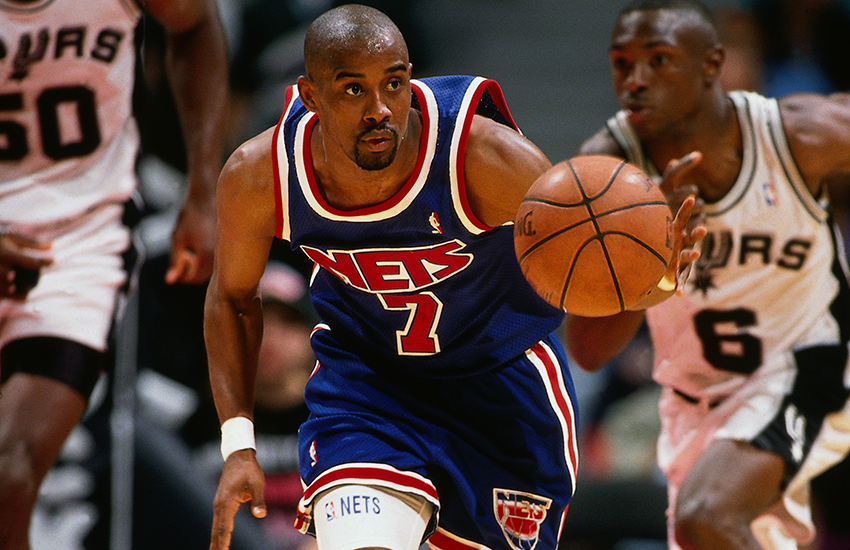 Anderson was the all-time scoring leader in New York City high school history with 2,621 points; a record that stood until it was broken by Telfair (which was subsequently eclipsed by Stephenson). Like many players, his artistry with the ball wasn’t appreciated while he was an active NBA player. Now, thanks to YouTube and other outlets, a new generation has rediscovered one of the best players to ever pick up a basketball.

Anderson went on to play two successful seasons at Georgia Tech, before being the No. 2 overall pick in the 1991 NBA Draft. “Mr Chibbs” carved out a 14-year NBA career in which he averaged 12.6 points and 6.1 assists with nine different teams. Today, Anderson is a father, mentor and friend. He’s currently working on getting Kickstarter funding for a documentary about his life.

We recently sat down with Anderson to discuss his life prior to the NBA, his college career, life on the road in the NBA, having a healthy relationship while in the NBA, life after the NBA, and his upcoming documentary.

You’re from LeFrak City in Queens. How was life growing up there?

Growing up in Queens, LeFrak City was awesome for me. It was convenient. I went to Archbishop Malloy High School. The train ride was 30 minutes from LeFrak. Queens Center Mall was right down the block. Everything was in walking distance. We had a park in LeFrak City. It was a basketball court that I played at. I stayed there from sun-up to sundown. It was a great neighborhood.

A lot of NYC players on the come-up looked up to you—players like Stephon Marbury wanted to be Kenny Anderson. Who were some players that you looked up to?

I was always in the park and watched a lot of basketball on TV, but the guy I pretty much looked up to was Kenny Smith because his brother Vincent Smith was my mentor. He was somebody that I can touch. He was always there. The Smiths were like my second family.

You were one of the best high school players of your time. What were some of your favorite memories?

My greatest memory in high school is when I won the city championship as a freshman and I received the MVP at the end of the game. I remember it like it was yesterday. I scored 23 points and dished out seven assists without playing the first quarter. I only played three quarters. After that night, my life changed as far as recruitment goes. Also growing up in New York with all the playgrounds, all the tournaments meant so much to me. It was so much competition and so much hoopla, every tournament in New York—Harlem, Queens, Brooklyn.  It was so many people that would come out and watch the games. It was awesome.

Your high school coach, Jack Curran, played a big impact in so many players’ lives? What impact did he have on your life?

He was a guy that taught me how to lead as a youngster, as a 14-year-old, because I wasn’t sure if I wanted to play ball. I played varsity for four years, and at Malloy that [never] happens. I was one of the first that did it. I was around Coach Curran for four years. He was a great friend and mentor. He was at Archbishop Malloy for 50 years before he passed away. It was a blessing for me to have a coach like that.

You’re good friends with LeFrak’s own N.O.R.E. Do you have any interesting N.O.R.E. stories to tell?

We come from two different sides. I’m an athlete, and he’s a rapper. I was just so happy for him when he made his first album that went platinum. I saw him grow as a young kid to a young man. To get out of the projects to be successful was a blessing for him. I’m happy he’s found success in the rap game.

How did you get the name “Chibbs?”

Chibbs is very dear to me. My family and friends call me Chibbs. My mother named me that when I was five days old. She was eating and had food in her mouth and said Chibbs, and she liked the name. My family, my friends, and everyone in LeFrak called me Chibbs. I didn’t know my name was Kenneth until Kindergarten. When I did something great, she would say, “Look at Mr. Chibbs, he’s doing his thing.”

My college experience was the best two years of my life. I love Atlanta, and I loved playing “Lethal Weapon 3.” I felt Dennis Scott, Brian Oliver and Coach Cremins gave me the ball and let me rock. The people welcomed me with major southern hospitality. I was one of the first New Yorkers to come down there back then. It was a small southern town and nobody knew about Atlanta. It was awesome. I had a great time.

Who were some of your rivals in college?

My biggest rivals included Duke University with Bobby Hurley, John Crotty in Virginia and Chris Corchiani at NC State. That was a time when the ACC was at its best. It was great playing night in and night out.

How did your life change after the 1991 NBA Draft?

What were some things that a young man with a lot money had to look out for?

Who were some of your mentors during your first few NBA seasons?

I didn’t have too many mentors in the League. I was the youngest guy in the NBA at 20 in 1991. I played for New Jersey so I was close to home. When I was coming into the League, a lot of older guys envied me and were jealous because you come in with a lot of fanfare, getting a lot of money. Some of them had been in the NBA for long periods of time and didn’t get a big contract. I was happy being back in the metropolitan area, playing for New Jersey. Being that I was from NY, I had enough support.

After your second season, your stats increased across the board. What did you do differently?

I just worked out more and I got more minutes. I didn’t play a lot my rookie year. Then my second year, I broke my wrist. Being in a better situation played into it as well. I was playing with the right set of guys, Derrick Coleman and Drazen Petrovic. I just kept my head up and kept working.

Your NBA career didn’t pan out the way you expected. Why do you think that happened?

Everyone has their own opinion. I played 14 years in the League. Just look at my numbers. Who I was and who I am, I put that high expectation on myself and it should be that way. I got it done on every level. On the high school and college level, I did my thing. For 14 years, I put up solid numbers in the NBA. I didn’t win a championship and I didn’t play my entire career with one team, but I was blessed to play in the League.

What do you think about today’s NBA?

The game is great. It’s at its highest financial point. It’s a billion-dollar business, its global. The young studs are pretty good, I’m excited. I’m a big fan of the NBA.

What do you think about Kevin Durant signing with the Warriors?

It’s his decision for him to sign with Golden State. Everyone is going to have an opinion about it. In my era, a lot of the superstars probably wouldn’t team up together on a super team. They’ll probably say he took the easy way out, but that’s life. He’s a great player; one of the top players in the League playing on one of the greatest teams in the League with Stephen Curry, Draymond Green, and Klay Thompson. It’s going to be a lot of pressure on them to perform. We have to see what’s going to happen.

Everyone gets compared to a player from the past. Which player today reminds you of yourself?

Kyrie Irving, Stephen Curry, and Chris Paul, I see some elements of myself in those players. The point guards today are awesome—Curry, Irving, Paul, Russell Westbrook, and Damian Lillard. It’s the glory days for the point guards in the League, it’s a real exciting time.

What is your funniest NBA locker room story?

I can’t really get into that right now. I plead the fifth! My documentary is coming out. I don’t want to give you too much!

Speaking of, you have your documentary coming out. What can we expect from it?

It’s inspirational. It’s going to talk about my upbringing in New York, all the obstacles I had to overcome, being the No. 1 recruit four years straight out of high school. I was a child prodigy at 10 years old. My transition from the NBA into the real world is why my slogan is so deep to me. My slogan is “Basketball is easy. Life is hard.” That’s my main thing right now. It’s going to be real inspirational to some of these young kids coming up. Even adults can learn from it. It’s some real life issues on here. Barry Greenstein is a big time contributor to the documentary. Jill Campbell is the director who did a hell of a job of shadowing me for four years now.  I got a great team and I can’t wait.

What do you want people to get out of your documentary?

I just can’t wait for it to come out so people can see what I’m all about. Pay forward and give back to the youth. It’s going to be very inspirational. I’m excited.