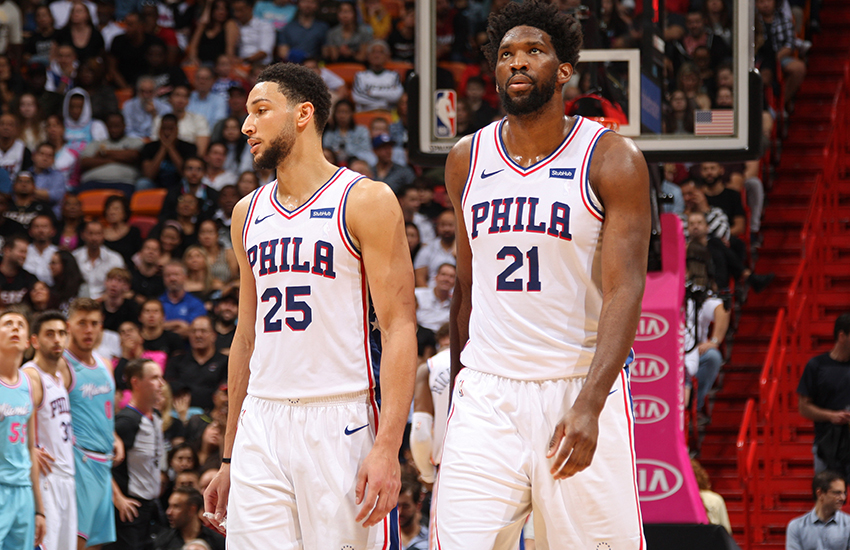 In the wake of a gruesome finger dislocation, the Philadelphia 76ers are getting an unwanted but perhaps necessary glimpse into what life might be like without Joel Embiid. Although it’s not exactly the first time Philly has played without him, the lack of dominance from a team many believed could compete for a title this season has led to an increased level of scrutiny about the chemistry or lack thereof on the roster.

From an extended lens, having two of the 15 most desirable players in the League feels like an enviable situation, but the pairing of Ben Simmons and Embiid has proven incompatible rather than complementary. Worries aren’t stemming due to a lack of production or apparent differences in personality between the stars. In fact, the Sixers could stay the course with the duo, but would either player ever be maximized and would the Sixers resulting lack of a unified identity haunt them again in May?

Both Embiid and Simmons stand as devil’s advocates to many of the accepted realities about today’s game. In the modern NBA, most teams believe you have to play fast, run your offense through the perimeter and stockpile the roster with forwards who can switch up or down defensively.

Embiid, who leads the League in post-up opportunities and thrives off of his ability to downright out-man any opposing center or otherwise, would be served immeasurably better playing next to a point guard who could space the floor and convert on set shots when Embiid pushes the ball back out.

On the flip side, Simmons would thrive in a fastbreak offense where he can drive at disadvantaged defenders instead of standing off-ball in a half-court set. If Simmons was willing to play large minutes at forward, knowing he could still run the offense (see Draymond Green), he too would be aided by a guard who could extend the offense as both a secondary creator and floor spacer.

On the most recent episode of Hot Takes and Shot Fakes, guest Ti Windisch, while on the subject, noted that the Sixers have made a surprisingly large number of franchise-altering decisions over the last five years. It might be time to make one more.

In the six games since Embiid went down, the Sixers are 4-2 playing at the second slowest pace in the League. Their offense has been abysmal, ranking 24th in the League. Not exactly a ringing endorsement for moving on from The Process. However their defense has been the second best over the two-week span and the return in an Embiid trade would be sure to include a player—or multiple players—who could create offense and hopefully, contrary to prior acquisitions, space the floor.

It’s impossible to draw hard conclusions from a small sample when the style of play and personnel are certain to change drastically if the Sixers did commit to that level of franchise-altering transaction but nonetheless, it has been interesting to see Simmons take on a bigger role.

On the season, the Sixers are 23rd in 3-point shots made, 25th in 3-point attempts and 17th in 3-point percentage. It’s unforgivable that a team featuring a traditional big and a non-shooting point guard offer so little spacing.

Of the 118 players averaging at least four 3-point attempts this season—Tobias Harris, Josh Richardson and Al Horford rank 71st, 98th, and 102nd respectively. The current reality portrays a talented roster with so little concern for fit that even J.J. Redick couldn’t complain.

If you’re shaking your head at the prospect of dealing either one of the Philadelphia stars, consider that Harris is on a terrifying five-year $180 million dollar deal. Horford, who is set to turn 34 in June, just signed an immense $109 million dollar deal and Simmons’ extension kicks in next season. As it stands, Philly is locked in.

Granted, 76ers general manager Elton Brand hasn’t even had a full season with the Frankenstein he’s created and perhaps he’s earned the right to see a playoff run before being judged in totality but the clock is always ticking.

Should the Sixers once again fall flat in the playoffs, this summer might provide the optimal opportunity to shake up the franchise. The free agency market is barren and barring a massive swing of power, the chance to push for a title without a standing dynasty has to be appealing.

The elephant in the room is durability. Embiid has never played more than 64 games in a season. In a healthy season by his standards, Embiid played 64 last year and still headed into the playoffs with concerns about his left knee. He had an injury or illness designation most of the postseason and because of it, his performances varied greatly.

Windows don’t stay open long in the NBA. In a year where a title was supposedly up for grabs, the Sixers have failed to elevate themselves into the contender conversation. To take it a step further: Even with Kawhi Leonard leaving the North and with it, a shaky Raptors’ title defense, Philadelphia isn’t even a favorite to come out of the East.

If you’re of the belief that Embiid is a significantly better player than Simmons and it’d be foolish to move on from him, you still have to concede that pushing the envelope to win now is the correct decision. Resting on your laurels is never wise but it feels especially foolish if the key cog in your machine has trouble staying in rotation.

Also consider history. Dirk Nowitzki is the last, “big,” to win the Finals MVP award and he was the original unicorn. Duncan led the charge for five championship teams, but towards the last two, even he ceded the reins to perimeter players Tony Parker and Kawhi Leonard in 2007 or 2014. The 2005 season was the last time a title team ran their offense through a traditional back-to-the-basket big man.

History has shown us far more cohesive guard-big duos to never get through. John Stockton and Karl Malone spent 18 seasons together and never punched a ticket. Seattle’s Gary Payton and Shawn Kemp and Phoenix’s Kevin Johnson and Charles Barkley never got over the Michael Jordan hump. Chris Webber and Mike Bibby couldn’t take advantage of their small window of opportunity. Steve Nash and Amar’e Stoudemire were a match made in heaven and never saw the Finals. Chris Paul and Blake Griffin never even saw the Conference Finals.

If you were Elton Brand, between now and next season would you breakup Joel Embiid and Ben Simmons?

You can’t stem the tide of the pace and space era with a disjointed and flawed unit. It’s time for the process to choose a direction and take shape.