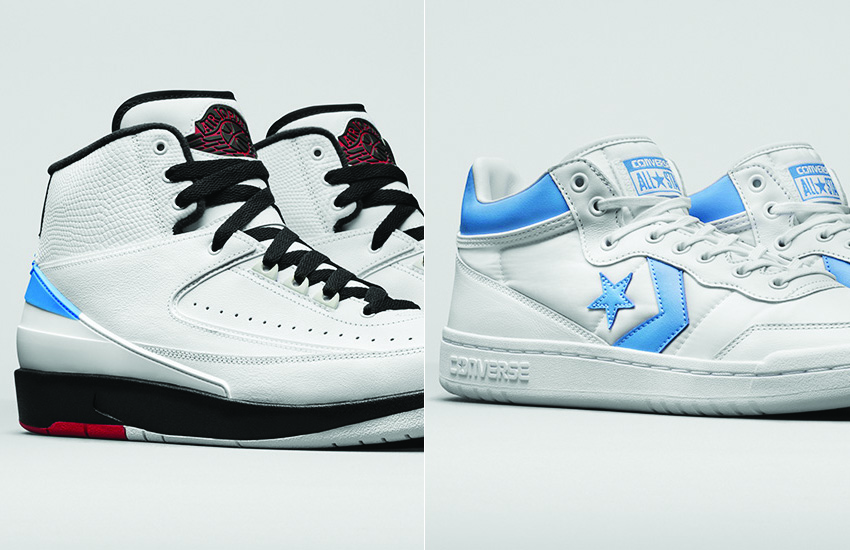 The term “Love of the Game” is often bandied about today, but it was a actually a legal clause in Michael Jordan’s first pro contract. It stipulated that Jordan’s NBA contract would not preclude him from playing basketball anywhere or anytime.

Spur of the moment pickup games and other competitive battles on the court aside, one of Jordan’s most beloved offseason runs would be the alumni games that took place at the University of North Carolina during summers in 1986 and 1987. But even before that, Jordan’s competitive streak showed itself in the summer of 1984. Having just been the No. 3 pick by the Chicago Bulls, Jordan had every reason to skip the Olympics to get himself ready for the NBA, but instead he opted to join several amateur underclassmen (Patrick Ewing, Chris Mullin and Sam Perkins being the most notable) in playing for Olympic gold.

In celebration of Jordan’s famous clause that would carry on for his entire career, Jordan Brand is releasing “The 2 That Started It All” pack that will feature the two shoes that galvanized MJ’s “Love of the Game”—the Air Jordan II and the Converse Fastbreak.

The Air Jordan II was the signature shoe Jordan wore in the 1986 UNC alumni game. It was the same groundbreaking (it was Jordan’s second shoe but the first true “signature” model since it lacked the typical Nike Swoosh branding) shoe he wore in his second season, but it was a PE edition that featured a nod to his alma mater, Carolina Blue, on the heel. The AJ II reprises that PE while also harkening back to the ’87 alumni game with the date of the game, 6/28/87, on the heel.

The Converse Fastbreak might not be as recognized as any shoe from the Air Jordan line, but its history and importance is on par. They were Jordan’s favorite shoe when he played in them at North Carolina (Converse sponsored UNC at the time). Jordan wore them throughout his three season in Chapel Hill, winning a national championship as a freshman in 1982. Jordan also wore them in his final days as an amateur in the 1984 Olympic Games before he would sign with Nike (Converse would subsequently acquire Converse in 2003). The Fastbreak returns in the pack in Carolina Blue in honor of Jordan’s many accomplishments in the shoe.

“The 2 That Started It All” pack will be available on June 28.

Jordan x Converse “The 2 That Started It All” Pack