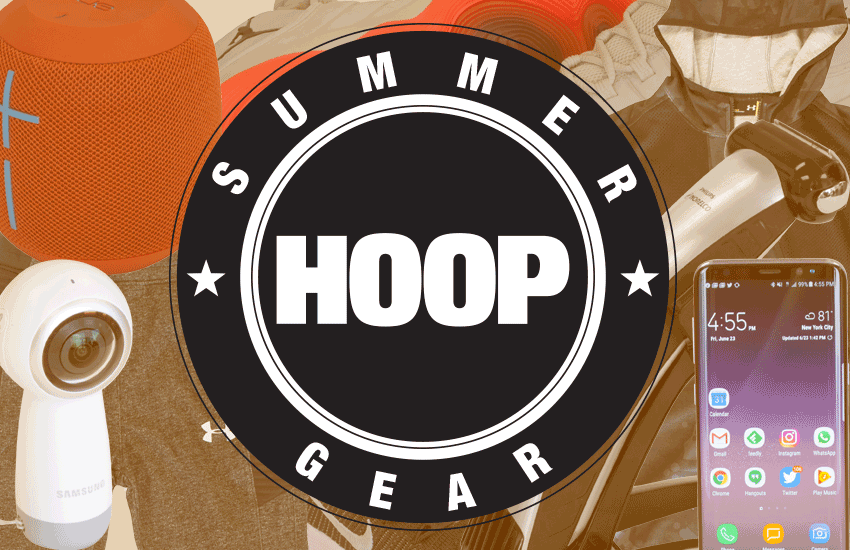 Summer has been unofficially on the clock for a while now, but call us old-school; we don’t count it until all the boxes are checked off: summer solstice (June 21), school’s out (pretty much everywhere now) and the NBA Draft is over (last week). With that, we present our summer picks for things that will enhance your flow for the next two months. 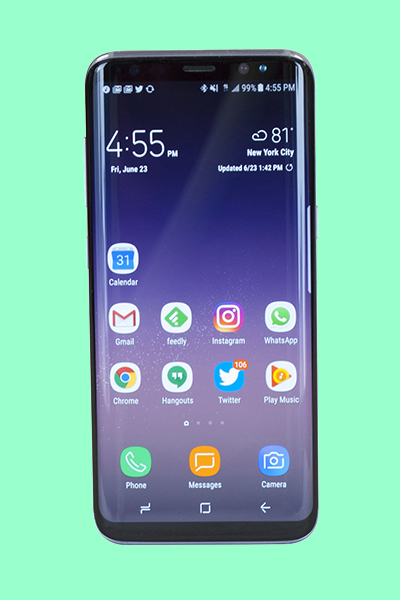 In the world of Android phones, there’s Samsung’s Galaxy line and then there’s…well, they’ve  become the premier smartphone in the Android realm. In a marketplace stuffed with flagship phones and midrange smartphones that will satisfy most users, Samsung still manages to make the S8 stand out from the crowd. Even before turning on the stunning 5.8 inch display, the S8 feels unnoticeably good in one’s hand because of the device’s lightweight and rounded edges that contour into the hand, making it feel like it’s barely there. The con to the new format is that the higher vertical screen means it’s a little more difficult to wield with one hand (tapping on something on the top corners will require some finger stretching).

Bringing the screen to life is when the S8 really captures your attention. The Infinity Display, the dual-edged screen that wraps around the entire front, immerses the beholder. Of course, it’s not literally 100-percent screen. There’s still the voice speaker, front-facing camera, various sensors and a notification LED light on the top, and the lower part of the screen doesn’t spill over to the bottom edge, but Samsung does a good job of making it seem like it does. Photos come to life on the brilliant 1440 x 2960 pixel screen, but where the S8 really shines is when watching movies on it, where it gives a big-screen experience in spite of being a handheld device.

The dedicated home button is gone to make way for more screen real estate, replaced by a virtual button in the OS. This means the fingerprint sensor had to find a new home. Samsung opted to move it to the rear, placing it next to the camera lens. The placement takes a bit getting used to and the elongated phone might require those with shorter fingers to reach or shift their hand up in order to unlock the phone. On a good note, the sensor is snappy and unlocks the device instantly.

The innards of the phone has all the trappings of a high-end phone. The brain behind it all is a Qualcomm Snapdragon 835 with 4GB of RAM. The battery is 3,000 mAh, which in our experience meant it got us through an average 12-hour day of usage on a full charge with room to spare. New to the Galaxy line is the USB-C  port for fast charging, but we’d wholly recommend charging wirelessly, which we found to be almost as fast as wired charging. Two carryover legacy features celebrated universally is the continued support of the audio jack and a microSD slot, the latter giving users the option to expand their storage up to 256GB.

The camera on the S8 isn’t a rehaul of the crowd-pleasing camera on the S7, but improvements were made. Lowlight capturing is improved and we appreciated how fast the camera is ready (double-tap of the power button), but it’s largely a similar, but excellent experience as the predecessor.

The final new addition to the S8 is a dedicated button for Bixby, Samsung’s personal voice assistant to compete with Siri, Cortana, Alexa and such. At the time of testing, Bixby had yet to be launched, but he/she/it promises to integrate into your life at your beck and call.

The S8 is easily the best Android device on the marketplace and it’s not bluster to call it the best smartphone available now (until we see what Cupertino has up its sleeve later in the year). The price is steep, but rest assured you’ll be getting the best and an experience that delivers. 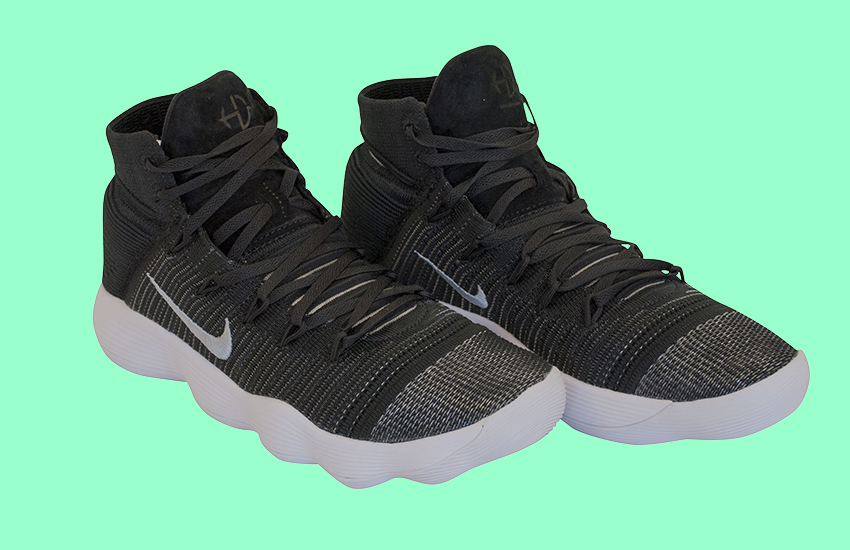 Summer basketball means the occasional outdoor run, which means a little extra pounding from the running and jumping on concrete. Protect yourself with Nike’s latest and most responsive foam cushioning technology to date, React, which springs back to life with each missed jumper, uncoordinated rebound and botched layup (the tech will help with the landing, the results will still be up to you). The pressure-mapped outsole has been painstakingly synced to correspond with the average foot, increasing the court grip and the Flyknit construction provides foot ventilation and a molded fit, while moving with your foot (targeted stretch points in the knit will have more give). The Hyperdunk is already a winner on the court, having been worn on the court by Draymond Green during the Dubs’ blitzkrieg to the 2017 NBA title. You’ll have to wait another month before its release on August 3, but it’ll be worth your patience. 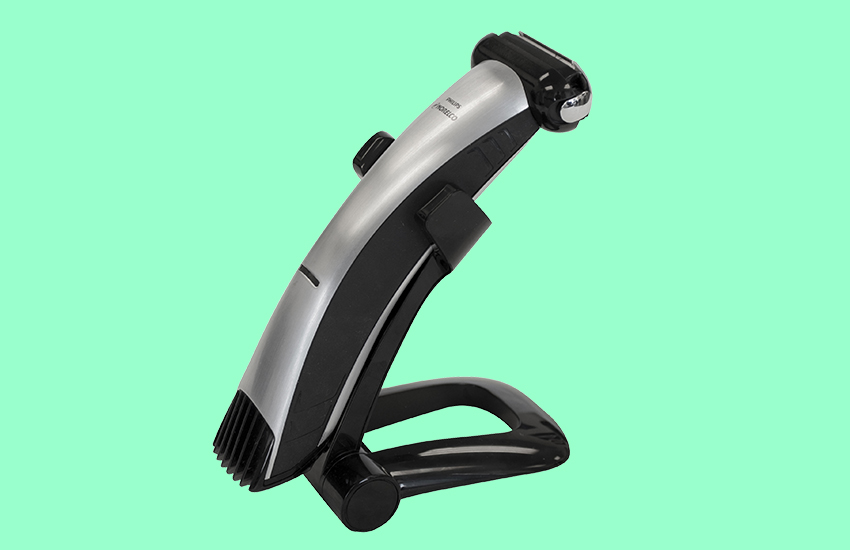 Summer means more exposed skin, which means a more vigilant approach to taming the body scruff. Your existing tools might do in a pinch, but that’s exactly what might happen when you take hair clippers and apply them to other regions. As its name suggests, the Bodygroom 7100 is designed to handle the delicate contours and areas that you don’t want to wield a razor or clippers near.  The dual-headed ergonomic groomer gives you the two tools to properly navigate any growth. The adjustable (from 1/8 inch to 7/16 inch) clippers can mow through any mane. The other end features a rounded tip foil shaver for closer results. The shaver has bidirectional trimmers that lop off longer hairs before the foil shaves it close. The pivoting head ensures it maintains steady contact as it traverses the angles of your nooks and bits. The Bodygroom 7100 has a built-in rechargeable battery that gives you an hour of use and is fully water-resistant so it can be used in the shower and easily cleaned after each use. 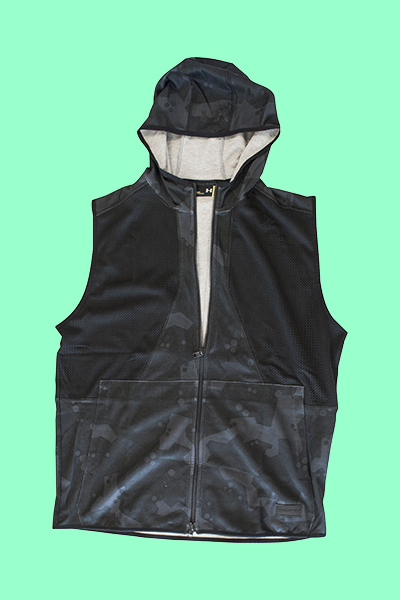 A warm-weather layering piece for summer training, the Safari Vest is part of Under Armour’s lifestyle category. The loose-fitting hooded vest features a two-toned modern camouflage print with stretchable mesh for movement and breathability. The cotton-blend construction wicks away sweat, is quick-drying and feature two generous slash pockets and a rear kangaroo pocket to stow your stuff. 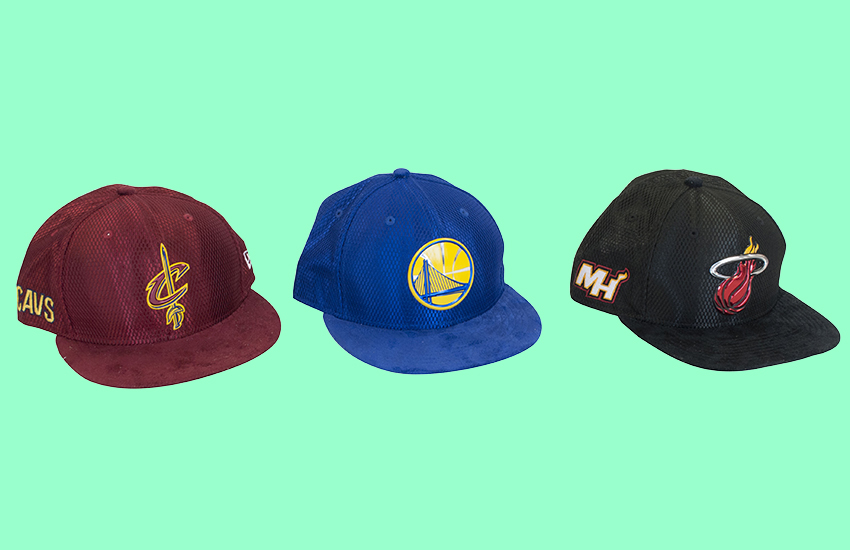 The same caps donned by NBA draftees on their way up to the podium to shake Commissioner Adam Silver’s hand, the New Era Draft caps feature Lux Mesh to keep the dome ventilated in the summer heat, DualChrome highlights on the front logo and microsuede on the bill. One side of the cap has the team’s secondary logo embroidered, the opposite side sports the New Era logo while the back has the NBA logo. The underside of the bill has an oversized reflective team logo that’ll add some flash to your selfie game. 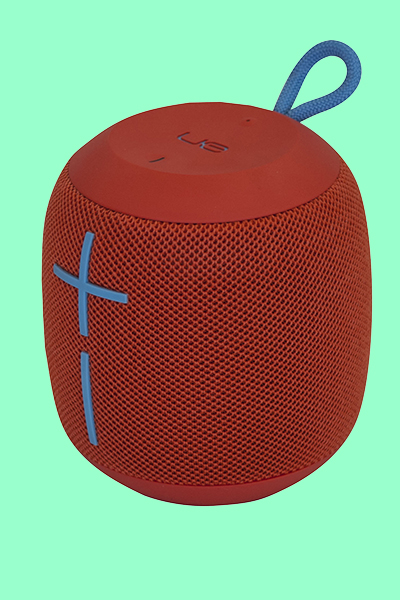 Built for the rigors of summer, the Wonderboom is a portable speaker that is right at home poolside, at a music festival, camping trip or hung off the bike. The fully waterproof and submersible—it floats!—speaker connects to your devices via Bluetooth and delivers big sound and bass in a compact package about the size of a softball. On a full charge, the Wonderboom can run for 10 hours with simple controls that sit atop the unit and the can’t miss “plus” and “minus” volume buttons on the face. A thoughtful hook opens up endless possibilities for mounting options. 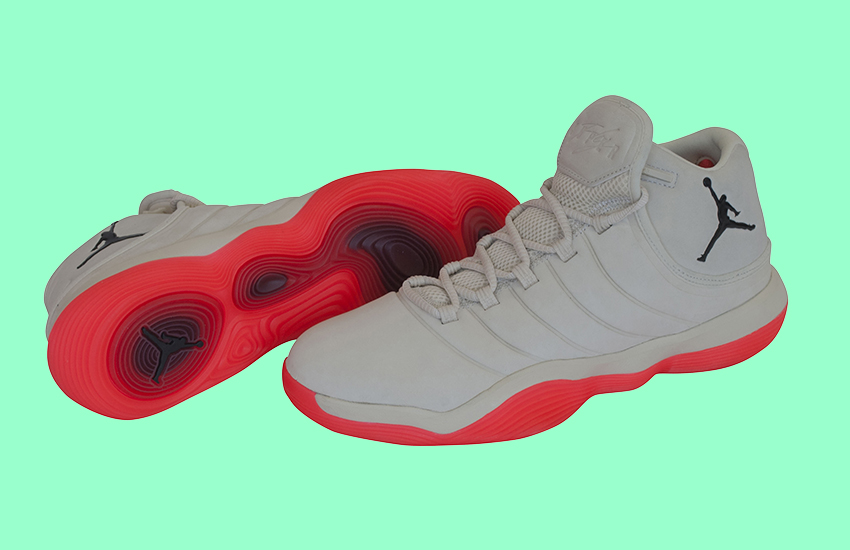 The Super.Fly has been one of Jordan Brand’s low-key consistent basketball offering for a minute now. With its traditional summer release, the Super.Fly has always naturally been a good choice for warm-weather outdoor runs. Blake Griffin has been repping the Super.Fly since its debut and the latest iteration is no different. What is different in the 2017 version is the inclusion of Nike’s latest cushioning tech, React. This is relevant because typically Jordan develops its own proprietary tech and/or adopts Nike’s tech later on. This marks the first time Jordan and Nike are debuting shoes with the same new technology at the same time. The Super.Fly 2017 has a similar full-length React core as the React Hyperdunk to absorb impact. The differences lie in the execution of the shoe. Like the Hyperdunk, the Super.Fly also uses a scientific foot-mapped outsole, but uses four highlighted pressure points. Instead of using Flyknit, Jordan opted for a more refined approach on the upper, utilizing premium suede with call-outs to Jordan DNA throughout: the OG Flight script on medial ankle and a silhouette based on the Air Jordan 11 (we happen to think it’s more reminiscent to the Jumpman Pro). Like the React Hyperdunk 2017, the Super.Fly 2017 will drop on August 3. 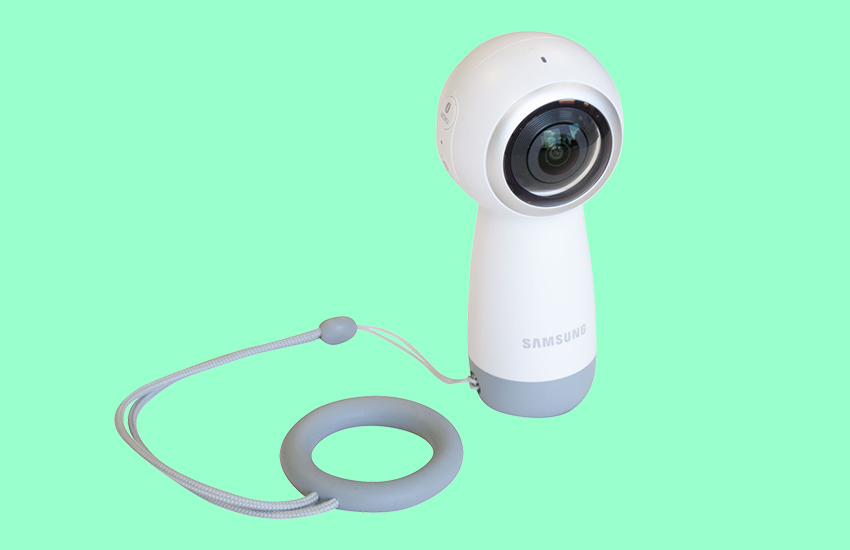 The Gear 360 was a game-changing virtual-reality, dual-lensed action camera when it made its debut last year, but it left some things to be desired for some users. Showing that they listen, Samsung has released an updated model this year that addresses the user feedback while maintaining the camera’s prime directive: to be a simple and fun way to capture 360-degree content. Samsung redesigned the Gear 360, ditching the tripod legs and opting for a more handle that makes it easier to hold. Overall the bulbous head of the camera is smaller than the previous one. A standard tripod tread in the bottom still allows for mounting options. The attached lanyard has a rubber ring that can be used as a stabilizing foot for the camera.

As for picture/video quality, the 2017 version sees a bump in resolution, 4,096 x 2,048 360-degree 4K video to last year’s 3,840 x 1,920. The content is stored on the onboard MicroSD slot (up to 256GB) and can be viewed live on a smartphone via Bluetooth (it can also be used blind without a phone and transferred over for viewing later on). New to the Gear 360 this year is more added phone support—including iPhones—and Android models running 5.0 and newer. A big update to the 2017 edition is the ability to broadcast live (2K video only) on Facebook and YouTube, making it the ideal camera to cook up summer FOMO to all your family and friends. 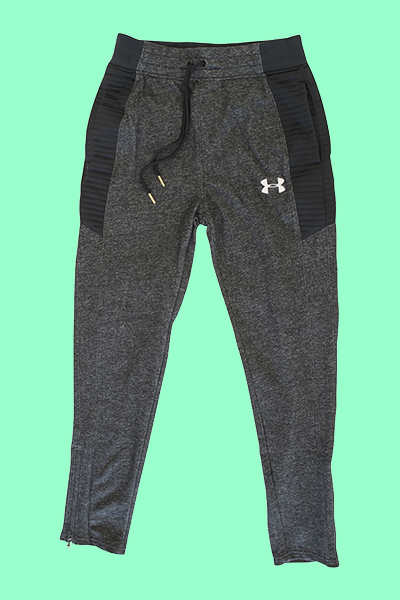 These lightweight pants are the perfect layer to keep the legs warm before a workout. The fitted cut gives a modern fit that starts out relaxed on the top before tapering at the ankle which have 8-inch leg zips. The french terry material is comfortable and wicks away any excess moisture. The top of the pant features a ribbed waistband, external drawcord and quilted side panels.