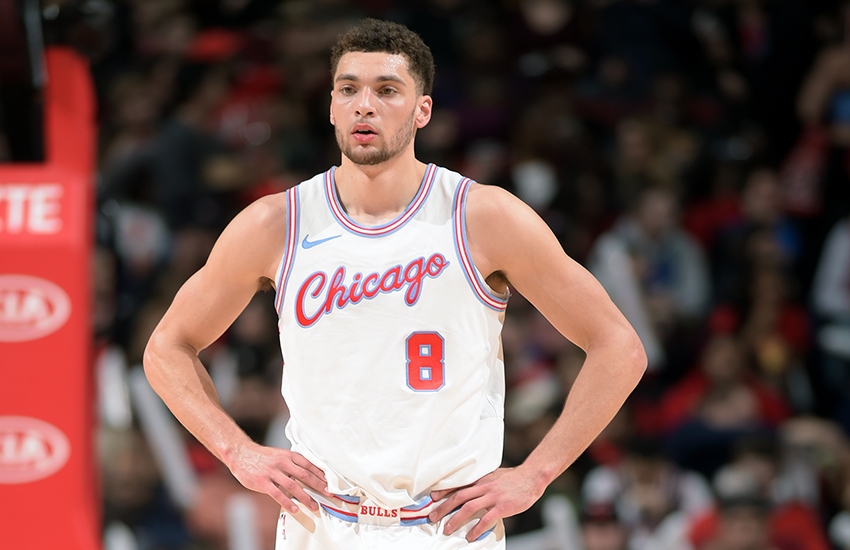 Zach LaVine is one of the few ballers in the League whose game rivals that of the videogame version in 2K (coincidentally enough, a game he doesn’t even play). His otherworldly hops and aerial creativity—the 2016 Slam Dunk Contest between him and Aaron Gordon ranks up with the Michael Jordan-Dominique Wilkins 1988 one in all-time dunk contests—make LaVine one of the most exciting players in the game.

After returning to the court last year after rehabbing from an ACL tear, LaVine proved that he’s regained his explosiveness and looking like the potential-filled star in the making. So much so, the Chicago Bulls committed to him for the future, matching a four-year $78 million offer from the Sacramento Kings.

While LaVine isn’t much for seeing himself perform digital dunks, he does enjoy fragging opponents and collecting loot, particularly the Destiny series. Recently, LaVine (along with Dallas Mavericks rookie Luka Doncic) recently participated in a Gambit Showdown for the new game expansion for Destiny 2: Forsaken. This included some big franchise fans across athletes, celebrities and popular gaming influencers, each participating on a specific team for some Gambit mode action. LaVine joined the ALPHA team along with rapper Vic Mensa and pro gamers SchviftyFive and True Vanguard (you can watch here).

We had a moment to speak with him after the event, as he spoke about the Destiny franchise, his hometown and more.

What do you enjoy most about playing the Destiny series?

It’s pretty much one of the first games I started playing with some of my friends, in 2014, I remember I was with my boy and I was picking between Destiny and Overwatch, and I’ve been playing since the first campaign. I fell in love with it, and I’ve been playing ever since. I know a lot of basketball players on this game—me, Paul George, Luka Doncic, and Gordon Hayward, played before—you know, it’s fun, I fell in love with the story and how you progress, it’s a lot of fun.

How did you come to partner with Activision?

It was worked out between my agency and them [Activision] and also I’m from Seattle, and I realized that their main office is in Bellevue, Wash., and I just found out that I live right down the street from them. I went there a couple of times, they’re great people, really fun, and they accepted me.

Which system or console do you use?

I didn’t get into gaming for a long time, my first game was a GameCube and that was in high school. I started kinda late, and I’m only 23, so when I was in high school everyone had a PlayStation or Xbox, but I mostly play with PlayStation, I’m a PS4 guy. I know a lot of guys use Xbox, a lot of my friends use XBox, but I’m PS4.

The gaming industry is huge right now, especially with NBA teams now having gaming wings alongside the franchise, and the games are broadcast on several networks. Do you see yourself getting involved on a bigger scale?

I don’t play like 2K and stuff (sports titles) like that. The only game I really play is Destiny. I play it at nighttime. I’ve never streamed before, [but] the event was streamed and it was a lot of fun playing with new people, and meeting people. I watch a lot of YouTube videos and stuff like that. It’s cool, and I’m sort of a role model for some people, they recognize me from basketball. I don’t think that professional gamers know that we look up to them, and what they do in the gaming world and it’s really cool.

A lot of people don’t understand watching someone play games on YouTube. What are your thoughts on that?

I think it’s really cool. I watch it, and it’s like someone watching me in my profession and they get entertained from that. People go to games, they buy tickets, and they watch us play. I go on YouTube, I give them views on their Twitch channel and I enjoy watching them play. They do crazy action shots, it’s just me watching them do their profession. I think it’s really interesting.

How similar is professional gaming to a team sport like basketball?

For basketball players and professional players I think it’s really easy, we’re both competitive, we communicate, we have roles, we have a leader of the team obviously and it pretty much translates into basketball because it fits right into winning and if you have the right communication, and the right chemistry, I feel like it translates the same way.