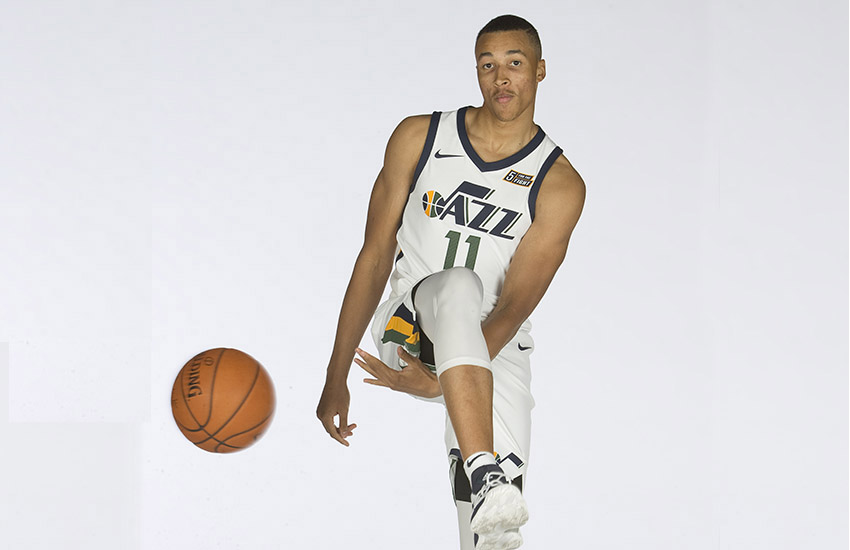 I talked with Ben Simmons, and he told me that you were one who got him into playing Call of Duty 10 years ago, when you both were 12 years old and Call of Duty: World at War came out.

Yeah, because me and my brother played Call of Duty. Ben was one of our friends. We were like, ‘You got to get it, you’ve got to get it.’ From there, that’s what we’d do together if we had sleepovers. We’d stay up all night and play Call of Duty. And we just bonded over that.

When did you start playing Call of Duty?

My first Call of Duty was Call of Duty 4: Modern Warfare. When that game came out was right when the PlayStation 3 came out. After that, I bought every single Call of Duty since.

What was it about the game that hooked you?

I liked the fast pace, the skill behind it. It’s kind of a hidden skill in a way where it’s just about different game styles and how you play the game. I think that’s what I loved about it so much. There were so many different play styles.

Do you remember Ben’s reaction when he first played Call of Duty: World at War?

Not really. But I do remember it took him awhile to convince his parents to buy a PlayStation. They were expensive back then. But once they did, I remember that we’d play it all the time.

Now with Call of Duty: World War II out and you guys hanging together in Utah before the Jazz-76ers game, is it nice to share an off night with a lifelong friend with lifelong videogame memories?

A lot of people go away from playing it. Or certain things happen and you don’t play as much. Call of Duty is something we’ve kind of held on to, and it’s something we’re able to keep bonding over.

You’ve dealt with injuries throughout most of your first four seasons in the NBA. Did videogames occupy a lot of your time after you got your rehab and other work done?

Yeah, I first hurt my ACL right when a new Call of Duty was released. So I was putting my time into that when I could not move around. Same thing happened with Ben. When I went to Philly when Ben was injured, I remembered looking at his game and he was at a high level. He just played so much during his time off.

Ben told me you guys always team up when you play. But even then, he says that you guys are so competitive that you’ll each check out your individual scores to see who is doing better. True?

Yes, we’re always on the same team. Whenever you have a good game and you’re doing better than him, you make sure to let the other person know. It’s just a fun way to keep the game interesting. That’s just the competitive nature that we have.

For any team, it’s tough losing an All-Star. But the way our offense is set up and our defense, we just adjust with other go-to players. No matter what, we’re always looking for the next best shot. Losing 20 points per game is always tough for a team, but that just means there are a lot more shots for our teammates. We’ve looked at it, like, “Let’s just find the best shot. Whoever falls into it that night, let’s go to that.” We don’t look at one guy every night that we got to go at—one guy that needs to carry us. It’s kind of a team effort.

With your own injury ordeals, have you talked to Gordon since he got hurt?

After shoulder surgery a couple weeks ago, I’m guessing you’re going to be out for a while.

Yeah, I’m still getting over that. That was one of the things when I had the surgery, I asked, “Will I be able to play Call of Duty?” It’s been fine. I wouldn’t have played COD if it hurt me in any way. But it’s been fine to play. So it’s been pretty much what I’ve been doing since the release. It keeps me occupied when I’m not at practice or rehabbing.

What will your role with the team be when you get back?

Hopefully, when I return, I’ll jump back into point guard and lead the team in that way. I try and stay involved in practice and film sessions as much as possible. I like helping out guys. I sit right next to our rookie Donovan Mitchell so whenever he has questions, I’m always answering him and helping him through the film. Just in any way, I stay involved. Once it comes back to me playing, I’m helping him, so once I get back in the game, it will help us all.

What’s it like to see your friend from Australia step right into the NBA and play like someone who might win the Rookie of the Year award?

It’s good to see Ben playing so well. Seeing how he rehabbed, I was just hoping he could come back the same.

It must also be nice to see other friends you’ve made on the global scene—seven Jazz teammates total from foreign lands—unite here in Utah to form one big team of international players.