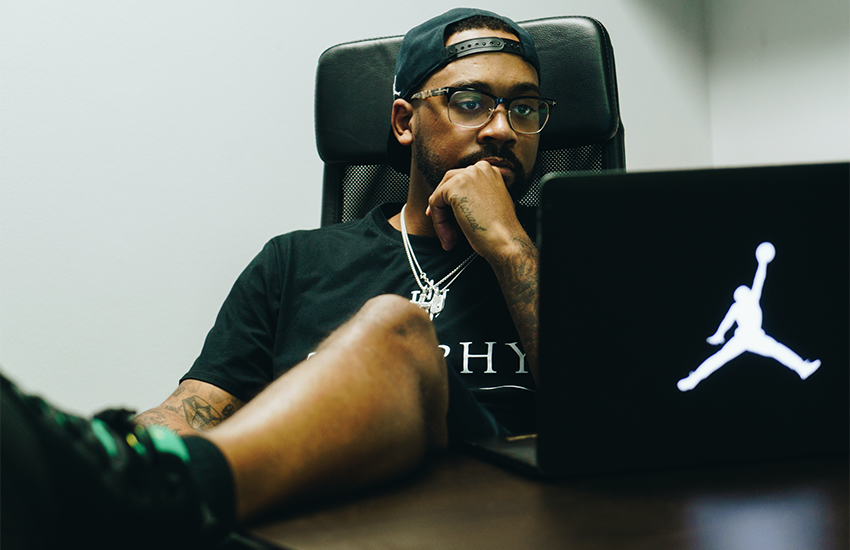 Marcus Jordan is the heir apparent to a sneaker legacy that has traced its lineage back 35 years. Jordan Brand has transcended sneaker and street culture to global acceptance and unprecedented popularity. If you think Yeezy jumped over the Jumpman you better think again. You’re talking about 34 years of history, represented by the greatest player to have ever played and is still a staple of NBA courts. After Jerry West’s Logoman, MJ’s Jumpman is the next most recognized silhouette in the game.

Jordan changed the NBA, he’s changed the way the game is played and the way the game looks from a fashion standpoint. Before him, teams would center championship aspirations behind a 7-footer, but his six titles with mediocre centers has proved otherwise. He was the first player to challenge the NBA on the “uniformity of uniform,”—that footwear needed to be either a majority white or black—with the black-and-red Air Jordan 1. Jordan’s preference for longer shorts increased the hemline throughout the sport. His shaved head did more for the acceptance of male pattern baldness than any other person.

“I love Jordans, I love to hoop in them and I love to wear them even if I’m not playing ball, ” says DeMar DeRozan.

The NBA has had its fair share of sneakerheads—from old heads like Ray Allen and Rip Hamilton to the current crop of players like P.J. Tucker and Chris Paul—sneaker enthusiasts the use the heat they wear on their feet as a form of self-expression.

“At one point I had over 800 to 900 pairs. When I was younger all I did was chase sneakers. I had a little bit of everything—Jordans, SBs—I was big into Dunks and Air Force Ones,” says C.J. Miles.

Being the youngest son of the greatest NBA player of All-time has its perks but it also holds a certain burden. For Marcus Jordan he see’s it as a blessing, carrying the Jordan surname gives him and the rest of his siblings the drive to excel in whatever endeavor they choose in life. Marcus, along with his older brother Jeffrey, followed in their father’s footsteps and pursued a career in basketball. The eldest brother Jeffery Jordan played at Illinois before transferring to UCF to play with his younger brother Marcus. The Jordan brothers’ basketball career didn’t pan out like their famous father but they have found their passions outside of basketball. Marcus is the founder of Trophy Room which is an upscale boutique located in Disney Springs in Orlando Florida that specializes in Jordan sneakers and other memorabilia.

We recently sat down with Marcus to talk about what it was like growing up as a Jordan, Jordan Brand, and his playing career

What was life like growing up the son of the Micheal Jordan?

Growing up had its perks being the son of Micheal Jordan, anytime we traveled it was always on my dad’s plane. It was always different events we went to, in addition to the vacations. My parents raised us to be hard working individuals, so everything was about trying to be the best person that I could be at the time. It was definitely a unique childhood and I appreciate all the moments I had growing up.

Did you feel any pressure living up to your father’s name while you were playing?

Yes, there was pressure, but it just comes with the territory. Every time we hooped someone always tried to have their best game against us, cross us up or dunk on us because we were Michael Jordan’s sons. That sort of thing drove us to be the best players that we could be and prove our own worth.

Did you ever play your dad one-on-one?

One of the things that I remember growing up is that anytime we played, it was always competitive. It was either we were trying to get better or working on something in particular. We were trying to go at each other.

I can’t imagine one of the greatest competitors taking it easy on someone. Did he ever take it easy on you guys just to boost your confidence?

No, definitely not. We caught a couple of wins in different games that we played, but it was all earned he never gave us anything on the basketball court.

While you played at UCF you got into a controversy because at the time the school was affiliated with adidas, but being the loyal person you are, you wore Jordans a few times. What was the whole time like, and what kind of reception did you receive once adidas dropped UCF?

When I was being recruited, the coaches and everyone told me that I would be able to wear Jordans because it was a deciding factor for where I was going to go. From the beginning, they told me it wouldn’t be a problem. They spoke to the adidas rep; everything was good. However, when I got to school and the season started, the higher-ups at adidas over in Germany took issue with it. The school originally told me it was OK for me to wear Jordans, so they wanted to uphold their end of the agreement. It ended up working out in the long run because The Knights look good in their Nike jerseys now, so it all came full circle.

What type of reaction did you get from your peers when adidas dropped UCF?

It had been brewing and when it finally happened, people was making fun of me since they no longer received any adidas products, but by the following year we all had Nike stuff.

After your basketball career ended it’s can be hard for people to reinvent themselves. How hard was it for you to step out of your father’s shadow and create your own identity?

You know that’s what I’m really focused on with Trophy Room. The apple doesn’t fall far from the tree; we retail a lot of Jordan Brand stuff but we kind of created our own lane and doing our own things with our Trophy Room brand and different apparel collaborations that we put out. From a content perspective, we’re putting out dope content, I think we’ve carved our own lane with Trophy Room I want to build up it up to what I think it can be.

You know I’m constantly on the phone, constantly on my email staying up to date on different day-to-day stuff that goes on with any business but I like to design different things—a lot of tee shirts, retros—and trying to figure out what my release calendars are for the season. The day goes by quickly because it’s so many different things to do on any given day.

Was getting into sneakers unavoidable?

I think just growing up and being around Jordan brand my entire life made it so simple it made it an easy segue because it’s something I love and been around my entire life. When the opportunity came with Disney Springs (an outdoor retail, dining and entertainment complex in Downtown Disney) doing their renovations and me being out here after college, made it a no brainer, I took a meeting with my pops in 2015, and they loved the concept when I pitched to them. I’m excited to have the business grow after these last few years and trying to figure out what’s the next location going to be like and building up that store.

How many sneakers do you personally own?

That’s a great question, I don’t know it’s a lot, it’s at least over 600 between my house in Orlando and Chicago. It’s crazy.

Do you own any sneakers outside of Jordan?

No, I’ll wear some dress shoes, other than that it’s just Jordan and Nike.

What are some of your favorite Jordan sneakers?

Do you have a pair of grails?

No, I don’t. If I had to pick, it’ll be one of my PEs or something that I designed.

How about your favorite PE’s that some NBA players have worn throughout the years?

What does it take for a NBA player to get signed to Jordan Brand?

Just work hard, do a good job of being marketable, and they’ll find you.

Transitioning to basketball…do you have a team that you identify with?

I follow the Hornets just to keep up with what my pops is doing, other than that I’m a fan of the game and I try to watch as many games as possible.

It looks like this year’s MVP race is going to be another tight one. Who do you have as your MVP?

Shoot, that’s a hard one. I was thinking LeBron James, but their record doesn’t reflect an MVP selection. He’s been consistent numbers-wise, but I don’t know. Get back to me after All-Star.

Who are some of the current crop of NBA players that you enjoy watching?

During your playing career, was your dad vocal on the sidelines like LaVar Ball is?

Nah, he definitely wasn’t like that. He would be vocal when we came out of games. Normally he would be hollering at the refs, but anytime we came to him with any basketball-related questions, he would always work with us on it.

What kind of stuff would he say to the refs?

What are your thoughts on LaVar Ball and Big Baller Brand?

I think he’s a unique guy, that’s for sure. He has to do what he has to do.

Do you think he made the right decision to go independent with his Big Baller Brand?

I think it’s his choice. I really don’t have an opinion on it either way. I think he had the right to do what he wanted to do.