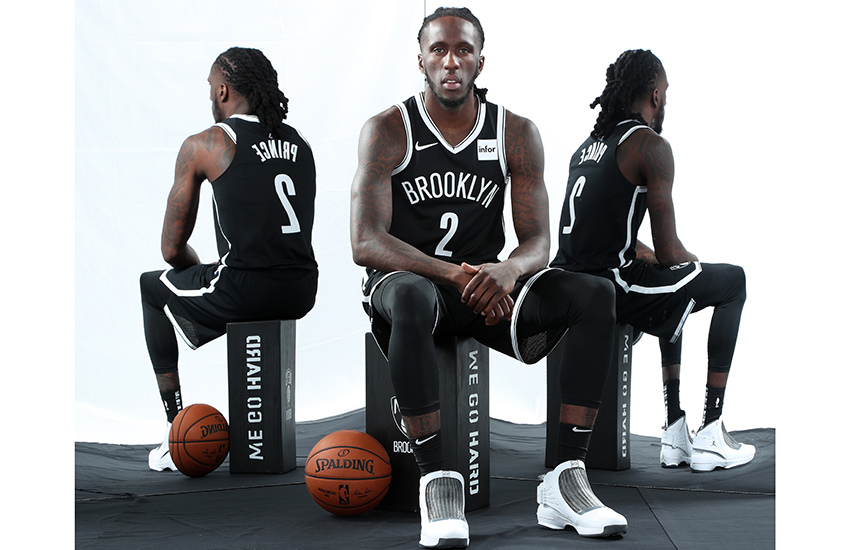 In the world of sneaker aficionados, guys like PJ Tucker and Montrezl Harrell get all the love as the undisputed sneaker kings in the NBA. However, if history has taught us anything is that someone is always coming for the crown.

Aside from being a gritty defender and a dependable 3-point shooter, Tauren Prince has the most underrated sneaker rotation in the League. He’s quietly built a reputation that has rivaled some of the most well-known sneakerheads in the League. Last season in Atlanta, Prince wore some of the most varied and exclusive  sneakers to date, thanks in part to being a sneaker free agent after previously being with adidas. For true collectors that is liberating because you get to wear many brands across the board and you aren’t beholden to one brand in particular. In Prince’s case, this works out because he’s playing his first year in Brooklyn, one of the most fashionable places in the world. Expect Prince to take advantage of the platform to flex his sneaker rotation this year.

First off, are you still a sneaker free agent? Yes, I am still a free agent. The best part about being a free agent is having the freedom of wearing different sneakers throughout the year.

Last season in Atlanta you wore The TMac 3, and 5s. Nobody gives Tracy McGrady props for his contribution to sneaker culture. Do you feel he has an underrated sneaker legacy?

I think he was impactful enough to do what he did. A lot of people are still wearing his shoes. I think because it’s adidas it’s flown under the radar, but I think his legacy in the shoe game is still solidified.

Probably one of McGrady’s most famous sneaker moments occurred during The 2004 All-Star game when he wore The TMac 3. Today people wear mismatched sneakers all the time. Do you feel he was ahead of his time in the way people rock their sneakers today?

Yes, for sure he made it happen and he’s the reason people started to do that. I have his shoes at home. I’m not sure if I’m going to wear it this season like I wore last season but it’s definitely a shoe that’s in my collection.

One of the rarest sneakers that I’ve seen you play in were the 20-5-5 LeBrons. It’s one of my personal favorites because I feel it’s a sneaker that wasn’t fully appreciated when it was released, but has grown in value over the years. How did you come across such a rare pair of sneakers?

I have a friend and one of my guys is from Cleveland. His whole life are his shoes that’s all he thinks about 24/7. He usually comes up with a lot of fire and when he presents them to me, I just say yes or no to him if I want them or not.

One of my favorite sneakers that I’ve seen you play in was the OVO AJ VIII, how do you feel about Drake collaboration with Nike?

I think they’re dope I like the cream vibe to the black-and-white it’s something that you can wear on and off the court.

I like them all, the 4s the 2s, and the family and friends package. I like the low 1s, the high 1s, even the Air Force 1s it’s crazy, it’s a great shoe. Travis collaboration is so dope, and it’s killing the streets right now, I have to tip my hat off to them on such a dope collaboration.

Jay Z started the wave for rappers to have their own sneaker deal with his Reebok deal back in 2004. Which rapper today do you feel has the best sneaker collaboration?

I’ll probably have to go with Travis because the colorways are dope and I like his colorway on The Air Jordan 1.

PJ Tucker is universally heralded as the sneaker king of the NBA. Would you rank yourself as one of the League’s best sneakerheads alongside guys like Tucker and Montrezz Harrell?

Yea, for sure, 100 percent. One thing about me is that I’m not a hoarder. A lot of my shoes I sell. I usually get a lot of back for them and I use that money to buy more fire.

What are your all-time favorite sneakers?

My all-time favorite pair has to be the Air Jordan 1—all different types of colorways—because it’s such an iconic sneaker and that sneaker, in particular, started the sneaker boom.

You pulled out some serious heat in Atlanta last season, are you planning on wearing anything special this season in Brooklyn?

Kevin Durant is my guy so I’ll rock some of his sneakers this season. I’m going to wear some AJ1s, LeBrons as well, they’re one of my favorite sneakers to play in, but we’ll see. I don’t have a definitive selection of sneakers that I’m going to wear this year. I might even surprise a few people and wear some shoes that are extremely rare and hard to find.