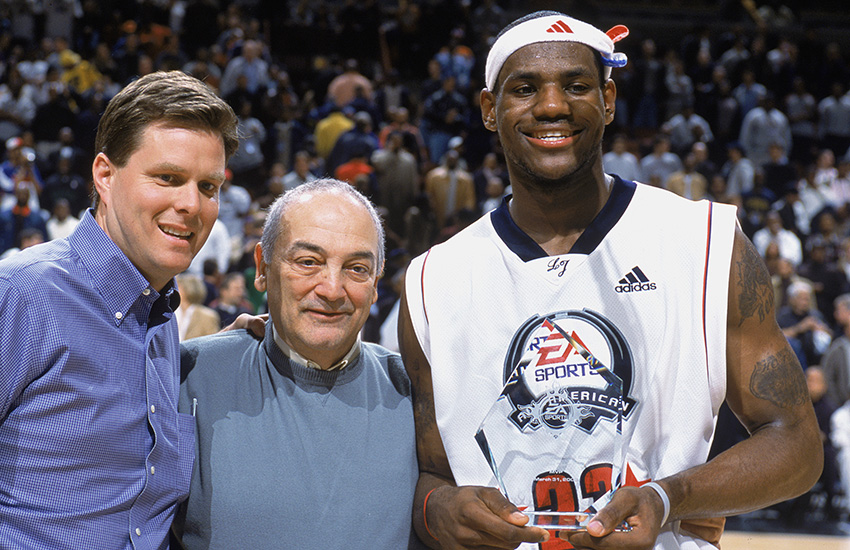 Michael Jordan deservedly gets credited for taking individual player marketing—and specifically sneaker endorsements—into what we know it today. But behind the scenes of what made everyone want to “Be like Mike,” was Sonny Vacarro, the sneaker marketing genius known for breaking mega deals—including the Jordan one with Nike that changed the landscape, and creating marketing techniques that were before its time. He has helped companies such as adidas, Nike and Reebok became fiscal juggernauts in the sneaker industry over the last 30 years and played a part in negotiations for the sneaker contracts of stars such as Tracy McGrady, Kobe Bryant and LeBron James.

For years the players he forged a relationship with celebrates him to this day, he’s loved universally, and he’s one of the most important figures in the basketball world. We recently sat down with Vaccaro as he took us behind the scenes on the most impactful sneaker deals of the last 35 years.

You are one of the most influential figures in modern history, how did you initially get involved in the sneaker business?

I got involved by accident. I was involved with basketball at an early age doing various All-Star Games I happened to go along with Nike, and they were looking for new things and that’s how I got started. It was happenstance.

The two prep games that are associates with you are The Roundball Classic and ABCD Camp. How did these camps help build your relationship with players?

Yes, everything I have now started in the early days. The Roundball Classic started my whole professional life. I couldn’t play sports anymore and I didn’t want to coach. When I did that game I was only 24 years old. The Roundball Classic gave me an entry into the basketball world, there’s no doubt about that.  If you want to go deep in the history of it all, Joe Bryant (Kobe Bryant’s father) was the MVP of my 1972 Game, also his mother’s brother played in the ’73 game. As time went on that game opened up a lot for me. The game got bigger when Nike came along and the rest was history.

And what about ABCD Camp?

ABCD Camp was undoubtedly the unrivaled camp of its time, nobody can deny that. Jammel, you’re old enough to see and young enough to be a part of it by keeping score of the names of people that played in that camp. In a way, it’s a recruiting tool because people judge the various camps by the amount of McDonalds All-Americans they get.

One of the first sneaker deals that put you on the map was Micheal Jordan deal with Nike. How did that deal come about?

The first significant sneaker deal in the history of mankind took place because Nike was looking for somebody. I had no place in that world. They asked me my opinion and I basically said Micheal Jordan is the one you should sign. It was the first time they were looking for a signature athlete to market.

In old photographs, I’ve seen pictures of Micheal wearing adidas. At any point was he ever close to signing with adidas? How different would the sneaker landscape be if he would’ve signed elsewhere?

He wanted to sign with adidas. Adidas was the popular shoe of the time, it was the first all-leather shoe, their sweatsuits were Gucci style, they were way ahead of their time. Adidas at that time was worn by track and field athletes who at the time were considered the greatest athletes in the world. Nike didn’t even exist when Micheal was a child, however, the stars and the moon all aligned themselves when [Nike] signed Micheal. We made him an offer he couldn’t refuse.

How different would the sneaker landscape be if Nike didn’t sign Jordan?

All the things that you see today might’ve happened eventually, but it would’ve never happened without someone like me recommending him. You have to understand how lucky everyone was making this alignment—Nike, Sonny Vaccaro and Micheal Jordan. We forced other companies to give big money to other athletes. When I signed the college deals nobody was giving a school that much money until the team was good. Eventually they would’ve paid athletes, but Micheal became the singular force that created the boom.

You add the marketing of Nike and the “It’s Gotta Be The Shoes” campaign with Spike Lee, one of the greatest movie [directors] of all time. That campaign was successful, however Micheal transcended all of that. He opened every door in the sneaker marketing world, The world changed when Micheal and Nike became a force.

You were very instrumental in the prep-to-pro era of NBA players obtaining their first sneaker deals. During this time adidas had a reputation for signing up-and-coming players. One of the first deals that I can recall is Tracy McGrady’s with adidas. How did this deal come to fruition?

Adidas got right into the game when they signed Tracy and Kobe Bryant. The first two signings out of the box were two high school kids. Just think about how remarkable this was. Kevin Garnett didn’t get a deal right out of high school; his deal came later on, which was one of my last at adidas. Adidas was a player for four straight years—we got Kobe, Tracy, Kevin Garnett, Tim Thomas, and Jermaine O’Neal. Most of these guys made All-Star teams. So with Tracy, I gave him the pitch. He went to camp with Kobe, he went through the same Roundball Classic as Kobe and he knew all the deals that I put together. He trusted me. I knew these kids personally. It was all personal.

One of the most interesting aspects of McGrady’s adidas deal was that he was offered $1.7 million, which was double the amount Kobe Bryant got the year before in 1996. In addition, McGrady’s high school coach got $150K a year for six years out of the deal. Were you surprised at the deal he got despite being only 18 years old at the time?

I thought it was brilliant even though he got beat up for it. He realized that his coach at Mount Zion put him the position that enabled him to be on our radar; Tracy took care of him. In Kobe’s deal, we gave his dad $150K, but when Tracy did it, he was getting criticized for it. In Tracy’s mind, if it wasn’t for his coach and if it wasn’t for his coach bringing him to my camp, Tracy wouldn’t be the player he is today and Tracy is the first one to say it.

Few NBA players at the time, much less prep-to-pro players, were getting the million dollar contracts that they get today. When do you think the tide began to turn in terms of the money players were receiving?

Grant Hill got some decent money from FILA, but they didn’t market players the way we marketed our players. Kids, especially in the ’90s, didn’t know their long term marketing potential, they just wanted to get a deal.

Another famous deal was LeBron James’ first $90 million deal from Nike. Can you talk about the bidding war and what happened behind the scenes of the bidding war between adidas and Nike?

I got to know LeBron really well through his high school team, his AAU team. Maverick Carter and his mom Gloria, I knew them very well. What nobody wanted to admit is that Kobe, Tracy, and LeBron never went to Nike camps. They all went to ABCD Camp, and all three of them played in The Roundball Classic. My range for adidas to sign LeBron was $100 million. They didn’t listen to me and I quit. These kids—LeBron, Kobe and Tracy—the top three players associated with the prep-to-pro era is the backbone of what The NBA later became.

I knew Sebastian well, he went to ABCD camp since his freshman year of high school. The word is he got around $14-20 million from adidas, it was great for him. I wasn’t near Telfair’s adidas deal because at the time I was with Reebok. I had left adidas because of what happened with LeBron, but Sebastian got a great deal from adidas.

When Telfair was a senior in high school, he was one of the most hyped high school players of the time. Given your past relationship with him, was he ever considered as a serious signing for Reebok?

I never thought I would’ve brought him to Reebok. He would’ve been a good endorsement guy—he was an exciting good player, very charismatic and very popular in New York. I didn’t believe he would’ve been that guy for us. Under my watch, Shaun Livingston was the first major guy that we signed at Reebok. Shaun would’ve been an all-time great if it wasn’t for the injuries.  Again, I think my judgment is pretty solid. Telfair would’ve had a great contract from Reebok, but nothing like his adidas offer. I always wanted Shaun Livingston, I thought he was a great player. He’s still playing to this day despite everything he’s been through. He’s been a steady contributor to a team who won three championships on essentially one leg. I honestly believe Shaun would’ve been an all-time great player he would’ve never got hurt.

It’s crazy that injuries can affect you on and off the court like you said who knows what would’ve happened if Livingston never got hurt. When I think of devastating injuries, I think of Derrick Rose. How did his battle with injury change his sneaker marketability?

There are so many negative things that can happen. I’ve watched a lot of these kids get injured. When you talk about professionalism, making money and becoming an icon, I honestly think Derrick Rose would’ve been one of these guys and would’ve been in the Hall of Fame. He would’ve made billions of dollars; he was selling tons of Adidas shoes, but the injury comes and now he won’t get anything near to what he would’ve gotten if the injuries never happened.  What I’m saying to you is two of the greatest players in the world got injured and nobody knew if they were going to play again in a matter of hours. The game is so much different today, the travel and schedule are ridiculous, something nobody talks about is the wear and tear on their bodies. With USA basketball, and players making deep playoff runs every year what did you think would happen?

How marketable will Zion Williamson be?

Even though Zion ended up in New Orleans he’ll still sell shoes, but they won’t sell shoes like he would’ve had if he were in New York. More shoes are sold by accident by a shoe company in cities where your product is a flagship. If you go to cities like New York and Los Angles you have The Nike store, Adidas store, and UA store. You have millions of people coming into these cities buying these shoes. In these cities, the stores itself are landmarks. I hope everything goes right for Zion, he’s lovable, brilliant but for him to become of the greatest shoe salesman in the world a lot of things has to go right.