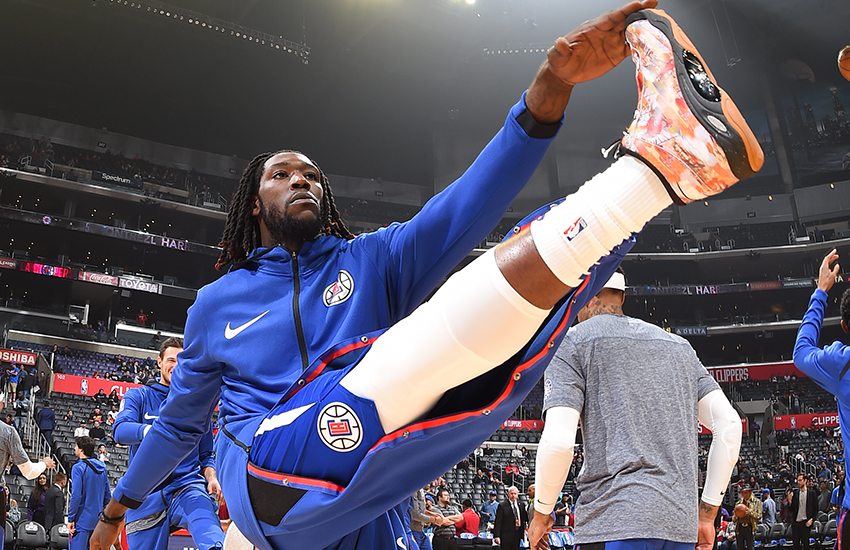 Montrezl Harrell on-court game and his shoe game has many parallels. On the court Harrell is reckless abandon, his energetic style contributing to the Clippers’ surprising rise as one of the top teams in a stacked Western Conference. This frantic style mirrors the choices of footwear he makes. Some of Harrell sneakers will blow you away. He owns thousands of pairs that he wears on the court—pairs that range from rare player editions (PEs), pairs from the Iverson catalog that we haven’t seen in years and custom sneakers that pay homage to 1990’s culture. In addition to being one of the sneaker kings in the NBA, Harrell is one of the League’s most superstitious players. One of his superstitions includes changing his shoes at halftime, something that he has done throughout his career, which has only served to give him more opportunities to show off his shoe closet.

Do you remember the first pair of sneakers that you brought with your own money?

The first pair I got were [Air Jordan] 3s. I want to say it was either the Cement 3’s or the classic white pair.

Did those Cement 3s start your love for sneakers?

A little bit, but I liked sneakers beforehand. My cousins were always buying the newer Js that would come out so that’s probably when I fell in love with sneakers.

You’ve been rocking a wide range of sneakers throughout the season. Do you have a Mount Rushmore of sneakers?

It’s some sneakers that I look forward to owning one day, like the LeBron 4s, the MVP LeBrons. I definitely want to get my hands on the original Air Max one day.

In general, the impact he had on sneakers was big. He was able to take a shoe and build it the way he wanted it. His originality is what made the shoe special. The laces in his shoes are what made it unique to me. The Question by far is one of the most comfortable shoes that I’ve worn. I definitely think the way he was able to go in and basically construct the shoe using his input was dope in general, I’m a huge fan of Iverson. I have a couple more that I haven’t worn, they’re mostly unreleased sneakers that I’m looking forward to bringing out. He’s one of those players that was able to be himself. People to this day say they implemented the dress code because of him. He wore numerous fur coats and du-rags during media scrums, he was able to be himself. Now with the NBA taking off the restrictions with shoes, this rule change has given the players another outlet to our story.

This season a lot of brands are getting the retro treatment. Do you have a specific sneaker that you want to see get that treatment?

That’s a good question, I like The LeBron retro 3s that he’s coming back out with, but I want to say the LeBron 4s because it’s big-time comfortable shoe, and the LeBron soldiers with the double strap on the tongue of the shoe is a favorite of mine.

Do you have a grail that you’re currently after?

Not currently at the moment, I really don’t have one. I’m excited about wearing shoes. I’m able to look into more stuff and find older T-Mac sneakers.

This past year has seen some very good drops, which include The Virgil Off-White Collection and the Nike X Fear Of God Collection. What are your favorite drops from 2018?

I like a lot of the 1s that’s been coming out. I feel that they did a good job with The Union 1s, that’s a dope shoe. I like The “Not For Resale” 1s as well. Those are the two I was probably most hyped on.

LA is a big market for sneakers with the various consignment spots and boutiques. Has living in LA changed your love for sneakers?

I would say it did, but I have been collecting sneakers for a long time. Sneakers and LA go hand-and-hand, they have a lot of sneaker boutiques and sneaker venues that you’re able to go out to—you have Soul Stage, Flight Club and Riff . Those are three big-time sneaker places that a lot of sneakerheads  check out while they’re in LA. So I’m fortunate enough to live in LA and come to these places at any given time.

You’ve changed the way people look at sneakers with some of your custom sneakers. How many customs do you own?

I lost count, to be honest. I had so much done this past summer. I know I have around 50, not counting the stuff that’s in the process of being done, and the stuff that I still have in mind to be done. I’ve spoken to so many people that does custom work, everybody’s custom work is different. It’s so many people out there that I can use, I really like to get their style on the shoe. I think it’s really cool that people are really passionate about it. It’s great to have art on a shoe that sticks and holds, so I think that’s something that’s big.

What goes into your mind when you’re creating these unique designs?

Which customs have been your favorite?

Honestly, all of them are my favorites because they’re all from different people. I really enjoy all my customs because it gives me a chance to reflect on things that I grew up on.

One of the craziest customs were the unofficial Reebok x Supreme x Louis Vuitton Answer 4s. What was your process like when you came up with that crazy idea?

The person that did it is a big-time artist based out of Baltimore. I saw him do it on a different shoe, At first he did it on a pair of Yeezys 250s, I had Supreme going down the little white line .I told him I have these Iversons and I asked him if we can do it on them. He said, yeah that’s easy, so when he started to put it together. I was like wow, this is going to be crazy.

Probably one of the rarest sneakers you’ve worn was the sample Brandon Jennings Knicks Reebok Question that you wore against the Raptors. How did you come across such a rare sneaker?

Oh man, you’ve been doing your homework, going into my bag… You want me to give out my connects on my kicks…that’s dope! I don’t know if I can do it. I got some guys that are in the Reebok family, and it all came from when I wore a pair of Dee Brown’s old sneakers, and from there I became really cool with the Reebok family. Earlier this summer I had come across that pair, and I’ve been sitting on them waiting for the perfect time to bring them out.

Some of your customs feature ’90s cartons. What are some of your favorite shows from the era?

I would have to go with Hey Arnold!, The Simpsons, SouthPark, Rocket Power, Rugrats, Doug. I watched a lot of cartoons.

Do you have other ones that we might see in the future?

Is it needless to say that you’re a fan of the decade?

Of course I am. I’m a big fan of Tupac, in general. I have a shoe with “To Live and Die and LA” music video, playing in the tongue of the shoe. He was that type of person that had a big influence on people, he never shied away from speaking his mind, even though he was put through the wringer with everything that happened in his life prior to his death. He lived his life and continued to believe in what he believed in.