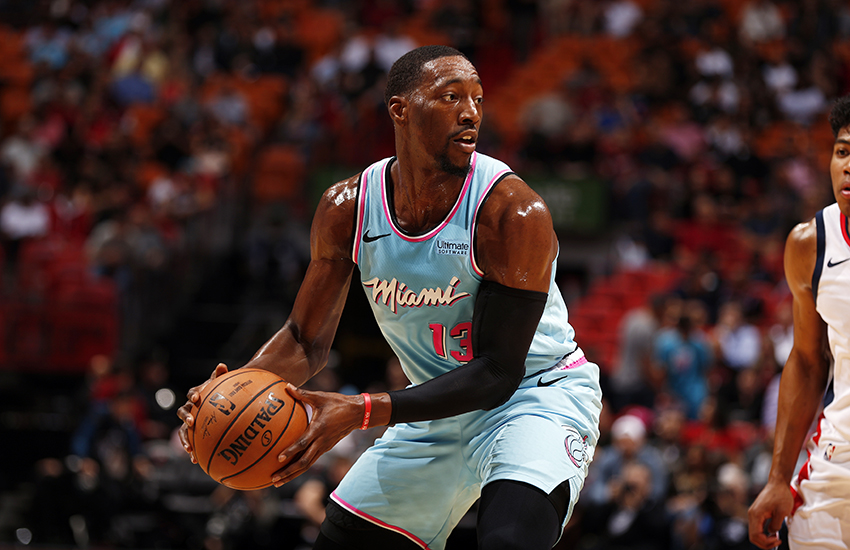 Bam Adebayo is one of the emerging candidates for Most Improved Player this season. Adebayo has picked up his production from a season ago, he’s one of the driving forces in the middle that has Miami overachieving in the Eastern Conference and he was selected as a first-time All-Star. While putting in all that work on the court, you might’ve noticed Adebayo’s sneaker rotation; he wears various PEs, LeBrons and Kobes. However, it’s his custom sneakers that have caught the eye of sneakerheads everywhere. Montrezl Harrell of the LA Clippers has the title of the custom crown, but Adebayo isn’t too far behind him.

Adebayo’s personality is reflected in each custom that he wears, most of which tie back to his childhood. It is this type of emotional connection that makes Adebayo embrace sneaker culture to the fullest. The customization aspect of the culture helps bring individuality into the light—just because you purchase a sneaker one way doesn’t mean it has to stay in the colorway and design that it originally came in. Artists are giving the players a platform to apply their form of expression on their shoes.

We recently sat down with Adebayo and spoke about his love for sneaker customization and his favorite pairs.

I’ve seen you rock a lot of eye-popping customs. What goes into your mind when creating a custom?

When you’re brainstorming ideas for your customs, do you let the artist do his thing or do you have a lot of input to the creative process?

Sometimes the artist would say, “I got you. Let me rock out with it”—that’s just him using his talents. In the end, I’m going to give him my feedback and if I don’t like it, I can always get another pair shoes and he can try again. For the most part, when he says, “Let me do my thing on this one,” I’m 100 percent sure that he’s going to have a great idea in mind.

Last season during Dwyane Wade’s “Last Dance,” you wore Air Jordan 10s honoring his legacy and his importance to the Heat franchise. What was Wade’s reaction when he saw the shoe?

I gave him the shoes, I felt like it was one of those things where it’s a tribute, but it’s also our brotherhood connection. I can call him anytime and I know he’s going to answer. He helped me evolve my game and I’ll forever be grateful to him.

The “Static Shock”  Jordan 11’s was one of your most creative sneakers. He meant a lot to African Americans because he’s a superhero that we could identify with. What inspired you to immortalize him on those Jordan 11s?

I’m a fan of the old-time shows like Static Shock. I watched that show so many times when I was younger so I wanted to put it on a shoe. He’s always been my favorite character. He’s one of the most underrated superheroes. I wanted him to be in the Marvel Universe so he can be with Black Panther, that’s something that’ll be dope.

Another one of my favorites was the Air Jordan 13 where you had Flintstone characters painted on the shoe. How important is it for you to have your personality shine through your sneakers?

It’s tied in with my name. My name is Bam and the character on The Flintstones name is Bam [Bamm Bamm]. It correlates with something that relates to me so I wanted to put it on a shoe.

How many custom sneakers do you have in your collection?

Right now I don’t have any. I’m having some pairs being made as I speak. I’m waiting for a special occasion to break them out. I should’ve done something for Vice night, but I was caught up in some personal issues. It’s going to be a lot of customs moving forward.

In past seasons you showed out with your customs. What can we expect from you in the future as it relates to your customs?

I always sit down with the small group that I have and we talk about it, the next custom that I’m going to wear will probably be at our next Vice night.

What are your all-time favorite sneakers?

That’s a hard one…I’m going to go with The LeBron 4s and 6s, Kyrie 3s. I’m a fan of all Kobes and back when they had Hyperfuse I wore those a lot. The Jordan 10s , 11s, and 13s, are sneakers that I also love and have a connection with, those sneakers are so iconic.

LeBron James has been steadily pumping out his signature sneakers for the last  17 years,  yet I feel he doesn’t get the respect that he deserves as it relates to his sneaker legacy. Do you feel that his sneaker legacy should be appreciated more?